I am constantly seeing strange food hacks on the Internet and sometimes I’ve very skeptical whether or not the methods actually work. Stuff like, Hey! You can cook an egg in plastic!

But this method for Waffle Maker Hash Browns made a lot of sense to me. I was really happy you all voted for it. Waffle irons get hot and they also provide some pressure and both can be used to make really solid hash browns.

Normally, to make very crispy hash browns in a skillet, it’s going to take 20 minutes or so, but these take about 10 and are completely stress free. Because the waffle irons are at a set temperature, it’s almost impossible to burn the hash browns. They just get crispy and beautiful.

I loved this method, especially if I’m only making hash browns for one or two.

Making hash browns that get really nicely crispy using your waffle maker is not only possible, but it’s really easy.

1) Shred potatoes and add to a bowl of cold water. Preheat waffle iron.

2) Swirl potatoes around in the cold water and drain them. Lay them out on a few paper towels and dry out the potatoes thoroughly.

3) Add dried, shredded potatoes to a bowl and drizzle with olive oil and a big pinch of salt and pepper.

4) When waffle maker is heated, spread out potatoes on the iron. Try not to get them too thick, but remember that they’ll shrink a bit as they cook.

5) Close the waffle iron and let the potatoes cook for about five minutes. Don’t worry if the timer goes off… it’s almost impossible to over-cook these.

7) Meanwhile, you can cook a few eggs in a drizzle of oil over medium heat. Either flip the eggs and cook for a few seconds on the second side so the whites set or just cover the pan and steam the eggs for 30 seconds or so so the whites are just set but the yolks are still runny.

8) Slide waffle hash browns onto a plate and top with eggs. Sprinkle with salt and pepper and a pinch of smoked paprika. Serve immediately!

You could use Russet potatoes for these Waffle Maker Hash Browns, but I prefer Yukon potatoes for hash browns these days. You don’t even need to peel them. Just grate them up!

Then drain the potatoes and lay them out on a kitchen towel or a few paper towels. Pat them very dry.

This is probably the most important step. Get the potatoes as dry as possible at this point or else they won’t crisp up nicely in the waffle iron.

When the potatoes are dried, add them to a bowl with a drizzle of oil and a big pinch of salt and pepper.

You want the potatoes lightly coated in oil so they get nice and crispy and won’t stick to the iron.

This is pretty straight forward. Heat up the waffle iron and pile on some shredded potatoes!

These Waffle Maker Hash Browns will shrink as they cook so you can pile them on. Also, I have a very intense waffle maker that I’m in love with, but I don’t see why you couldn’t use any waffle iron for this. As long as it gets hot and you can press it down, it’ll work!

Press the hash brown down and cook it for about five minutes. It’s totally okay if the buzzer goes off for the waffle. Just ignore it. We aren’t cooking waffles, we’re cooking hash browns.

This was my hash browns about half way through.

Then flip the hash browns and cook them for another five minutes or so.

They should be a really nice golden browned color. The crispier the better!

Eggs are the obvious serving choice with these Waffle Maker Hash Browns. I did mine sunny side up by cooking them with a drizzle of oil in a skillet over medium-high heat. When the whites are set (90 seconds or so), then I just cover the pan and let the eggs steam for about 20 seconds.

Serve the eggs on the Waffle Maker Hash Browns with a pinch of salt, pepper, and paprika!

If you have a hard time making hash browns that get really nicely crispy in a skillet, try this method out.

The hash browns will get crispy and it’ll leave your stove for other uses. 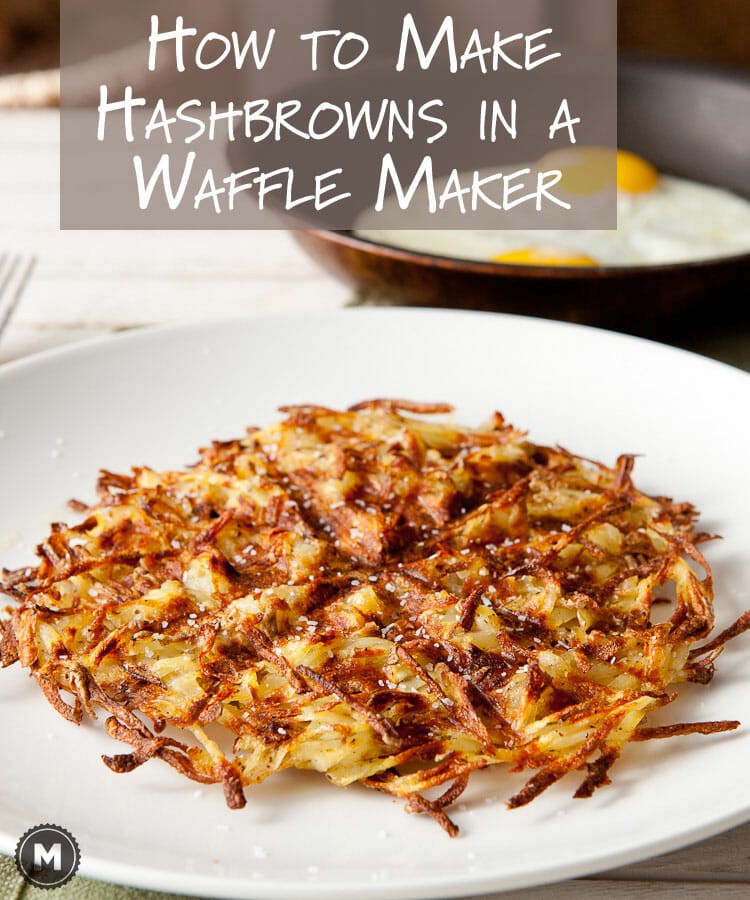 Has anyone cooked potatoes in a waffle maker before? Good right? Leave a comment!