By weight, I’m pretty sure spices are some of the most expensive things in the grocery store.  Normally, I just suck it up and buy them because there’s no way I’m going to go foraging for my own coriander seeds.

But there are a handful of spices that I regularly make at home.

At the top of the list for me is Homemade Chili Powder.  I almost never buy the stuff these days because I’ve found it pretty easy to make.

That said, I thought I’d send chili powder through The Homemade Trials and try to figure out if it really makes sense to make it or if buying it is the way to go.

As always with the homemade trials, I broke it down for TIME, COST, NUTRITION, and TASTE.

Honestly, there is no one recipe that I use for Homemade Chili Powder.  What I normally do is just pick up a few different kinds of dried chilis at the store.  For the version I made for this post I used just normal New Mexico chilis and also a handful of slightly hotter Arbol chilis.

Once you have your chilis picked out, just bake them at 300 degrees for about 20 minutes to bring out the flavors and dry them out even more.  Then let them cool and process them into a powder.  I like to use a spice grinder for this, but you can also use a mortar and pestle if you’re going for a more rustic feel. 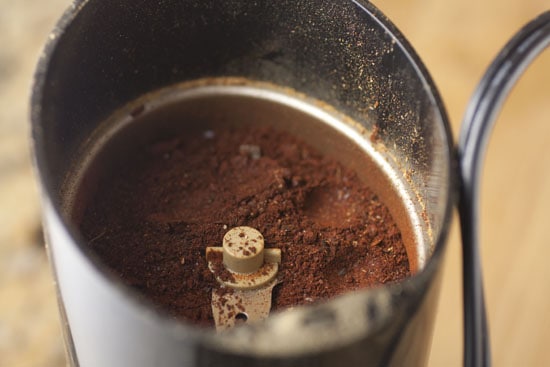 It’s pretty much a no brainer who wins the category of time.

It takes me no time to purchase a small jar of chili powder.  Meanwhile, it takes me about 30 minutes to mix up a batch of it myself.

Now, if I wanted to get technical here I could argue that I can make a huge batch of chili powder at once and it would save me time over the long-run.  But, of course, you could also just go to the store and buy out the entire shelf of chili powder and you’d be set for years.

No matter which way you grind it, store bought chili powder wins the TIME category. 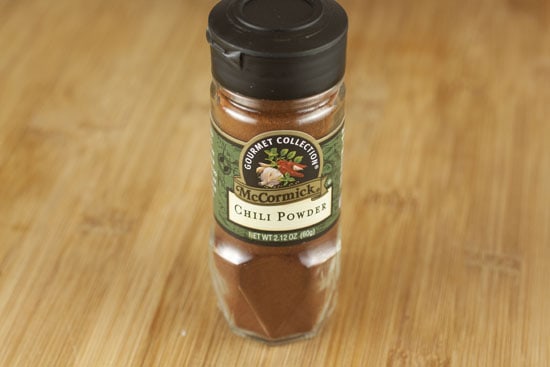 Cost was a bit hard to quantify because it’s hard to know exactly how much chili powder you’ll get out of the dried chilis.

Here’s my best estimation though.

For the store bought version, what I consider to be the average quality chili powder cost me $5.09 for 2.12 ounces.  That’s a cost of $2.40/ounce!  Now, of course there was a cheaper version, but not by much and those cheaper versions aren’t as flavorful.

Of course, you won’t get 5.5 ounces of chili powder out of that amount of peppers though.  I didn’t actually process all of my peppers into chili powder, but the only things that you can’t process are the seeds and the stems which are a pretty small percentage of the pepper weight.

For those that haven’t been following the homemade trials, that’s an insane price mark-up between the store-bought and homemade version.  The store bought version is more than double in price.

So yea.  COST goes to homemade for sure.

Nutrition is really tough to judge here for a few reasons.

2) Both of the versions are pretty similar although the store bought version does have some salt in it as well according to the ingredients.  So you could say that it’s less healthy due to sodium.  I didn’t add any salt to my homemade version.

That said, I’m calling NUTRITION a tie in this case.  There’s not enough of a difference between the two to get a winner. 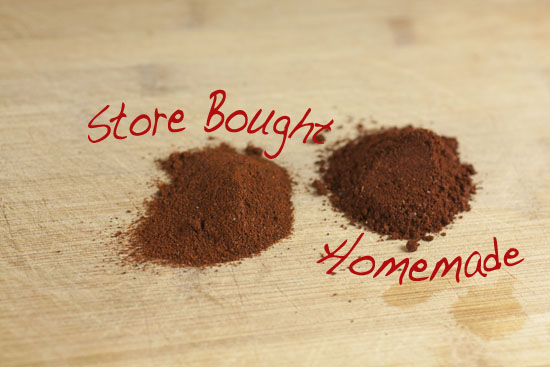 This is a close homemade trials so far and it’s all coming down to taste.

For this version, I thought the homemade version was a clear winner in taste.  I tasted both versions by themselves and this is what I noticed when I tasted them side-by-side.  The store bought version tasted basically like salt.  It has some flavor, but the main flavor component was salt.

Meanwhile, the homemade version is pure chili peppers.  It had a really deep flavor that’s savory and interesting.  Even though I only used two different kinds of peppers, the flavors were really complex.

An added benefit of the rich flavor of the homemade version is that you’ll actually need to use less of it to get a nice chili flavor to your dish.  A little goes a long way.

To me, flavor was a no brainer for the homemade version.

I think chili powder is a spice that you can and should be making at home.  The flavors are much more interesting and while it does take a half hour of your time, you’ll only have to do it probably once a year.

Once you get comfortable using a variety of chilis, the possibilities are pretty endless.

Plus, come on.  You’re really going to pay $2.40/ounce for what is essential a salt mixture?

We can do better than that, people.

Anybody make Homemade Chili Powder?  Leave a comment if you have any tips on good chilis to use!

30 Responses to “The Homemade Trials: Chili Powder” Leave a comment