The first time I made this dish on Macheesmo (seven years ago), it was an epic fail. Here’s the right way!

There’s an old dish called “Bird’s Nest” which is basically eggs fried inside of toast. So you just cut a hole in a piece of bread, toss it in a pan, and then add the egg to the center of it. The egg fries while the toast cooks. It’s a great dish and kids really like it.

But I kinda have a problem with the dish. A piece of toast doesn’t, in any way, represent a nest. A nest is lots of tiny bits of stuff. Not one big flat thing.

So I wanted to rework the dish a bit to actually look like eggs sitting in a nest. The best thing I could come up with was to make thin-fried potato hash browns and then set a few eggs on top to complete the deal.

Now this is a bird’s nest!

I call this dish The Bird’s Nest because well, it looks like a bird’s nest. Thin Hash Browns and soft-boiled eggs!

3) Working with about a handful of potatoes at a time, slowly add them to the oil. Stir well with a metal slotted spoon to separate the potato strands. Fry for about 90 seconds until they are crispy and browned.

4) Remove fried potatoes and drain on a few paper towels. Season with a pinch of salt and repeat with all potatoes. You should end up with a big mound of fried, slivered potatoes!

6) Divide fried potatoes between plates, making a well in the center. Top with chopped spinach and tomatoes. Then nestle in eggs and drizzle with olive oil. Season with chives, red pepper flakes, salt, and pepper.

The Many Fails of Bird’s Nests

The first time I made this dish many years ago, I didn’t even try to get the nest right. I was more concerned about the eggs. At the time I just couldn’t make soft-boiled eggs!

This was my best attempt: 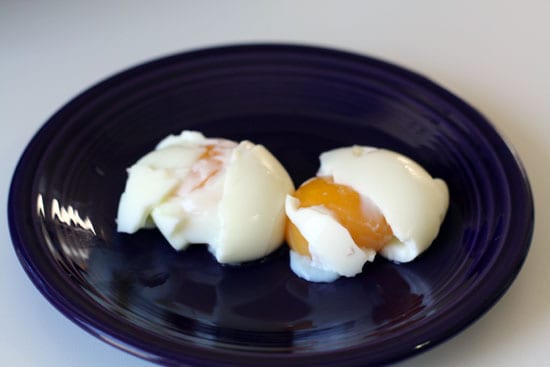 Since then I have perfected soft-boiled eggs and can make them on a whim with no problem. (PHEW!)

But the nest was giving me a ton of issues. I tried this dish four times before I got the method right. I tried pan frying the hash browns and then shaping them around a bowl. I tried baking the shredded potatoes in a mold for up to 90 minutes to get it to hold.

None of it worked. Turns out the best way to do this is also the fastest. You have to fry the potatoes to make thin, slivered fries basically. It’s a beautiful thing…. when it works!

My old version of this dish was cubed potatoes, which resembled a nest about as much as a piece of bread. What you need is grated potatoes, obviously.

Now you need to fry these, but you don’t need a deep fryer OR a lot of oil. Just about an inch of oil in a high-walled skillet or a few inches of oil in a pot will do the trick.

Get your potatoes very dry and fry them in VERY small batches. Basically, I did mine a handful at a time and don’t just toss them in the oil. Spread them out slowly or they will overflow your pot with oil!

Frying these things is absolutely NOT the time to get in a hurry. Work slowly and carefully or you’ll have an oil fire on your hands. Don’t blame me if you drop a handful of shredded potato in a skillet with oil and it boils over!

The good news: Each batch cooks incredibly quickly. Assuming your oil is hot, each batch takes about 90 seconds to be completely done.

Scoop the potatoes out on a plate lined with some paper towels and season it with salt!

This is the thing of my dreams.

Theoretically you plop any egg in these crispy potato slivers and it’s gonna be good. Personally, I just like the look of a soft-boiled one.

I’m not going to go into soft-boiled eggs here, but if you’re interested, here is my walkthrough which works almost always. I might have one fail out of a dozen eggs. It’s pretty failsafe.

Putting it all Together

Stack up some the fried potatoes on a plate and make a little well in the center. I like to add some halved cherry tomatoes and diced spinach. Then place in a few soft-boiled eggs and sprinkle with olive oil, salt, pepper, red pepper flakes, and chives. 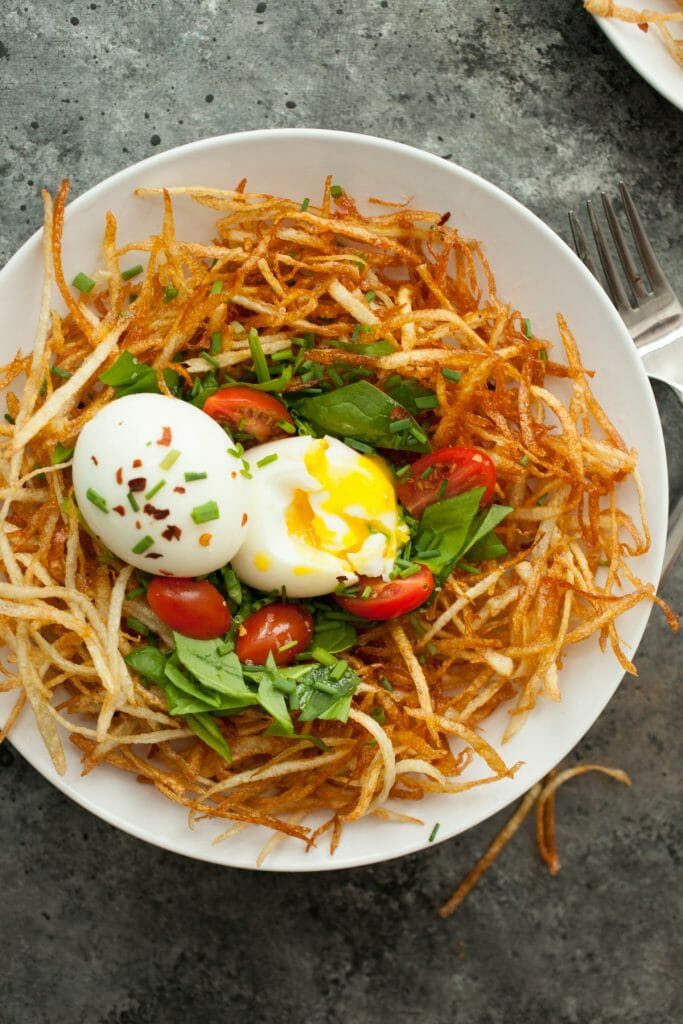 If anything, redoing this recipe has taught me how much you can learn about cooking in 6 years!

These Bird’s Nests are really fun and I’m sure I don’t have to tell you that the super-crispy potatoes and eggs are a breakfast lover’s dream.

This is a bird’s nest, people. Right?