A few weeks ago I came down with some sort of winter cold. I’m sure you know the kind. It wasn’t debilitating, but it sure did linger for days and days. It was the kind of cold that is just annoying, but not bad enough to warrant a doctor visit.

As most people know, one of the best ways to kick a cold like this is lots of fluids.

For my money, tea is one of the best things out there for combatting a cold like this.

In my opinion, this simple recipe is the best tea for a cold. It’s one of my favorite go-to remedies when I’m under the weather. It will kick a cold’s butt.

One downside… it might also make your breath terrible so don’t plan on kissing anybody after drinking it (also don’t kiss people if you are sick)!

Easy homemade recipe to get you feeling better quick! Made with just 5 common ingredients and will clear those sinuses!

1) Slice ginger and garlic thin and wrap them in cheesecloth with a cinnamon stick. The cheesecloth is optional actually. You can just pick the pieces out after steeping or leave them in.

2) Juice half of a lemon and add it to a mug or glass with honey. Add cheesecloth mixture to mug and cover with 10 ounces steaming water (not quite boiling). Cover tightly and let steep for 8 minutes.

3) Remove aromatics (or leave them in) and sip slowly.

The Best Tea for a Cold

This tea might not look like much in the photos, but trust me when I say that it’s strong. Of course, if you’re drinking it, you’re probably so congested that you won’t be able to smell or taste much.

The two key ingredients are loads of garlic and ginger. Raw. Yep. Just do it.

I slice both the ginger and garlic into coins and if you have some cheesecloth you can wrap everything up and make your own little teabag.

If you don’t have cheesecloth like this you can also just add everything together and then spoon out the big pieces later.

I like to add a small stick of cinnamon also which combats some of the harshness of the garlic.

I use a full half of a lemon for one cup of this tea. Don’t go light on the lemon and use a fresh one. The concentrated stuff tastes terrible in tea.

Stir together the lemon and honey and then add the tea bag or just stir in your other stuff.

There are really only two mistakes you could make while making this tea.

Possible mistake one: Using too much water. 10 ounces of hot water is about right. If you use more than that it will dilute the flavors too much.

It needs to steep for at least 8 minutes. This will give plenty of time for the ginger and garlic to infuse into the water.

That’s pretty much all there is to the Best Tea for a Cold.

I went through a whole head of garlic and about a pound of fresh ginger making this tea the last time I was under the weather. It made me feel so much better.

If you’re feeling bad, kick your cold to the curb with this homemade tea! 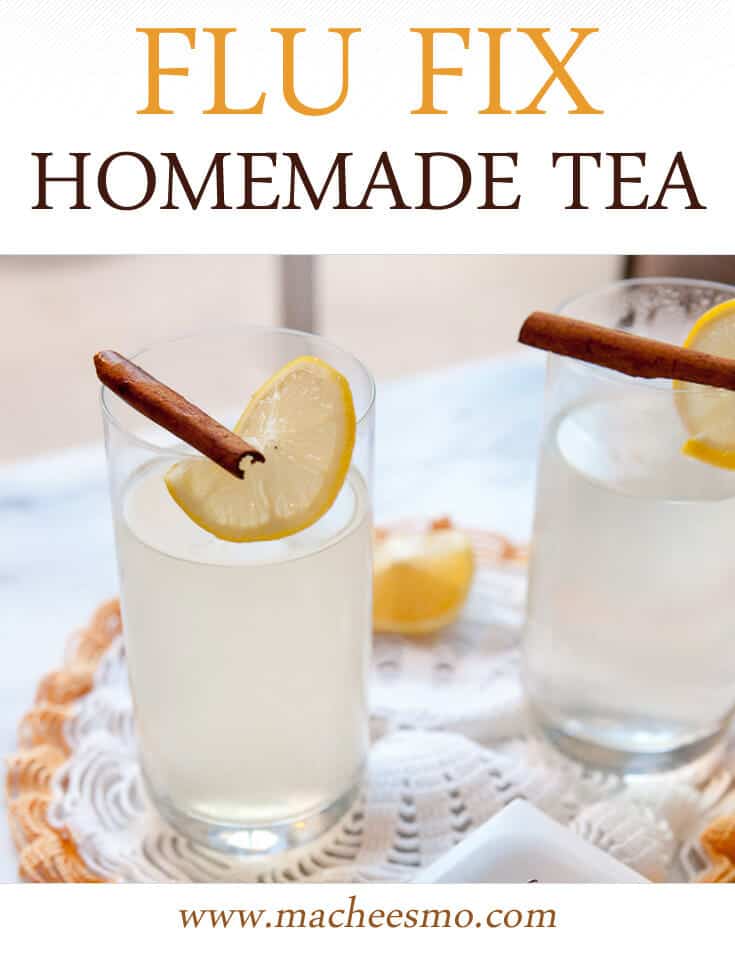 4 Responses to “The Flu Fix Tea” Leave a comment