Normal pasta carbonara is really good. I mean it’s pretty hard to go wrong with bacon, a creamy sauce, and good cheese. But that doesn’t mean that it can’t be improved on! Especially as we get closer to summer when there are so many delicious fresh veggies, it seems strange to make a meal without packing it full of veggies.

So that’s exactly what this recipe does. Not only does it happen to be delicious, but it’s also very quick and easy once you conquer the sauce! Start to finish is definitely under 30 minutes assuming you’re halfway competent with a knife.

Penne pasta mixed with summer squash and zucchini and tossed with a traditional carbonara sauce. One of my favorite pastas!

Adapted from Jamie at Home.

1) Chop your zucchini and fresh squash into half-circles about the size of the penne pasta.  Also chop your bacon into cubes.

2) Whisk your egg yolks (save the whites for an omelet), cream, 1/4 Cup Parm, and a pinch of salt and pepper in a seperate bowl.  Set aside for later.

3) Cook Penne according to box.

4) In a large pan with high sides, cook bacon over medium-low heat until very crispy and brown.  Remove bacon from pan.

5) When your pasta is done, drain it and reserve about 1 Cup of cooking water.

6) Add veggies to the pan with the bacon grease along with a few thyme sprigs if you want and some salt and pepper.

7) Cook the veggies over medium-high heat for just a minute or two.  Any longer than that and they’ll get soggy and mushy.

8) Combine pasta with veggies and add your bacon back in.

9) Kill the heat and slowly add in your egg yolk mixture, stirring furiously while you add it.  If you do this over the heat, your eggs will just cook, but they should into a creamy sauce if the pan isn’t on direct heat.

10) If it looks too thick, add a bit of reserved pasta water to make the sauce thicker.

The original version of this dish starts by noting that it’s really important to get the best ingredients you can. I would definitely agree. If you can get some good thick bacon, really nice fresh eggs, and colorful summer veggies, this dish will be very good.

As far as prep goes, start by chopping up your bacon and veggies. When you’re chopping your zucchini and/or squash, try to chop them into about the size of the penne. It gives the dish a great texture if everything is roughly the same size.

Also, chop up your bacon into cubes. You want to start the bacon in a cold pan and cook it over low heat.

The only other thing you need to prep before you get started cooking is the egg and cream mixture. Just combine your egg yolks (you can save the whites in the fridge for an omelet or something), cream, and about 1/4 Cup of Parm cheese in a bowl and whisk it together. Add a pinch of salt and pepper also.

This dish comes together pretty fast. The thing that takes the longest is probably boiling the water for the pasta actually. So be sure to get that started pretty early.

To start the carbonara though, add your bacon to a large pan preferably with high sides. Eventually everything will be in this one pan so use a big one. Cook the bacon on low heat and start it in a cold pan. The fat should render out pretty quickly though because it is chopped.

You want the bacon to be browned and really crispy.

Remove the bacon but leave a few tablespoons of bacon grease in the pan.

The next step involves just a bit of timing. The trick with the veggies is to not overcook them. Squash and zucchini can get a bit mushy if you cook them for more than a few minutes. So ideally you would start them when your pasta is 2-3 minutes from being done.

When you’re ready, add all the veggies to your pan with a pinch of salt and pepper and a few sprigs of thyme if you want. Stir this all around so the veggies get coated nicely in all the bacon oil.

This will smell pretty delicious. You might have people knocking on your door.

The key to making a good carbonara is to make sure you don’t add the egg mixture to a super-hot pan otherwise it’ll just over-cook the eggs and you’ll have scrambled egg pasta. Scrambled egg pasta isn’t the best thing in the world.

So here’s how to work it. When your pasta is done, drain it and reserve about a cup of the cooking water (most important step) from the pasta. I just ladle out a cup or so of liquid right before draining.

Next, turn off the heat. Then add all your egg mixture and start stirring!

The residual heat from the pan and the pasta will be more than enough heat to cook the eggs, but it won’t cook them quickly so they’ll stay nice and creamy. If it looks a little dry, add back some of your pasta water. The starch from the water will help thicken the sauce and make it even creamier.

I added probably 1/2 Cup of pasta water back to my version. The key is to keep stirring once you add your egg mixture!

The sauce should coat the pasta but shouldn’t clump at all.

The only other trick to this meal is to eat it as soon as possible! Add the bacon back in as well as some of your leftover cheese right on the pasta as you serve it.

Ideally, your veggies will still have a tiny bit of crunch to them, the bacon will be crispy and salty, and the sauce will be rich and creamy.

This is a really simple dish that can really impress! 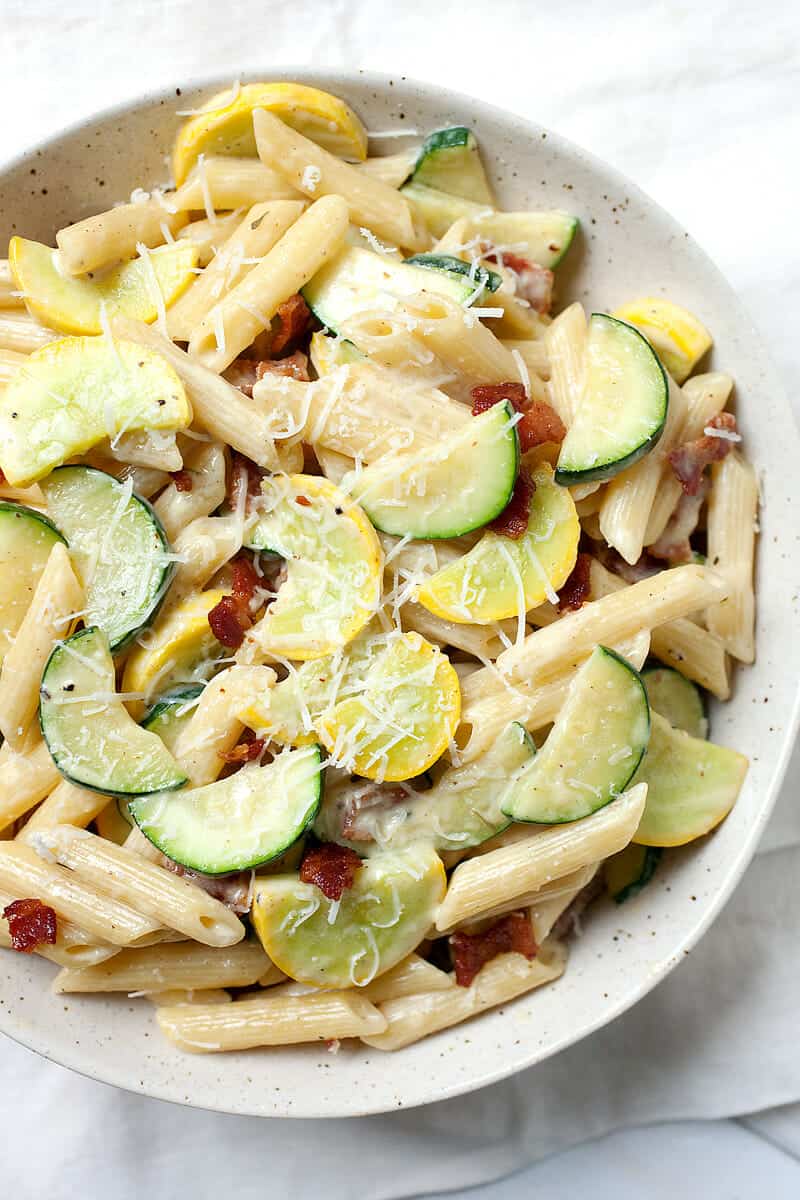