It’s almost that time! You know the time… the time to dust off the grills and enjoy a sunny spring!

I thought we were actually in springtime last week here in Denver and then we got smacked in the face with a very weird (and enormous) blizzard. I posted a photo of my dog on Instagram. It was a deep and thick snow!

That won’t stop me from talking about grilling though. And what better place to start than the humble hot dog. It’s probably the thing Americans turn to first if they are looking for a quick grilling meal.

If you are feeling spry though, do me a favor and try out these spiral hot dogs to kick off grilling season! Arguments for trying them include:

Mostly though, you should make them because SPIRAL HOT DOGS!!!

The easy way to take your standard grilled hot dog up a notch. Easy to do once you get the hang of it!

Preheat grill to medium-high heat. Working with one hot dog at a time, run a skewer through the middle of the dog.

Using a sharp paring knife, slice the hot dog down until you hit the skewer, at a 45 degree angle. Turn the hot dog, cutting a spiral into the hot dog.

If the spiral is too wide, you can do a second spiral by starting it on the opposite side and repeating the spiral cut.

Carefully remove the skewer from the hot dog. Grill hot dogs to your liking and serve with toasted buns and lots of toppings!

Do me a favor and don’t try to make these by holding a hot dog straight up in the air and slicing it down the side. It would probably make a cool Youtube Video FAIL, but will result in pieces of hot dogs and not a beautifully perfect spiral.

To do it right you just need a wooden skewer. Not rocket science!

Just insert the skewer down the middle of the hot dog. Try to get it as centered as possible. Then use a small knife to start cutting around the hot dog in at an angle. You can chop through the hot dog because of the skewer and it will keep you on track for the spiral.

When I did this, I had a hard time making my spiral narrow enough to look awesome. Mine always ended up slightly wider. Like this:

If that happens to you, don’t worry about it. Just repeat the spiral on the same hot dog but starting on the other side of the hot dog. So basically you are cutting two spirals that run around the hot dog and never intersect.

Once you’re done you can slide the skewer out. I was surprised at how sturdy the dogs were. They were easy to handle and I didn’t break a single one in half!

You know the next step. Toss them on a hot grill!

They get so crispy and the spiral opens up which is awesome for toppings!

Serve these spiral hot dogs hot off the grill, on toasted buns, loaded with toppings!

Any spiral hot dog fans out there?! I’m gonna have a hard time grilling a normal hot dog now that I know the joys of the spiral version! 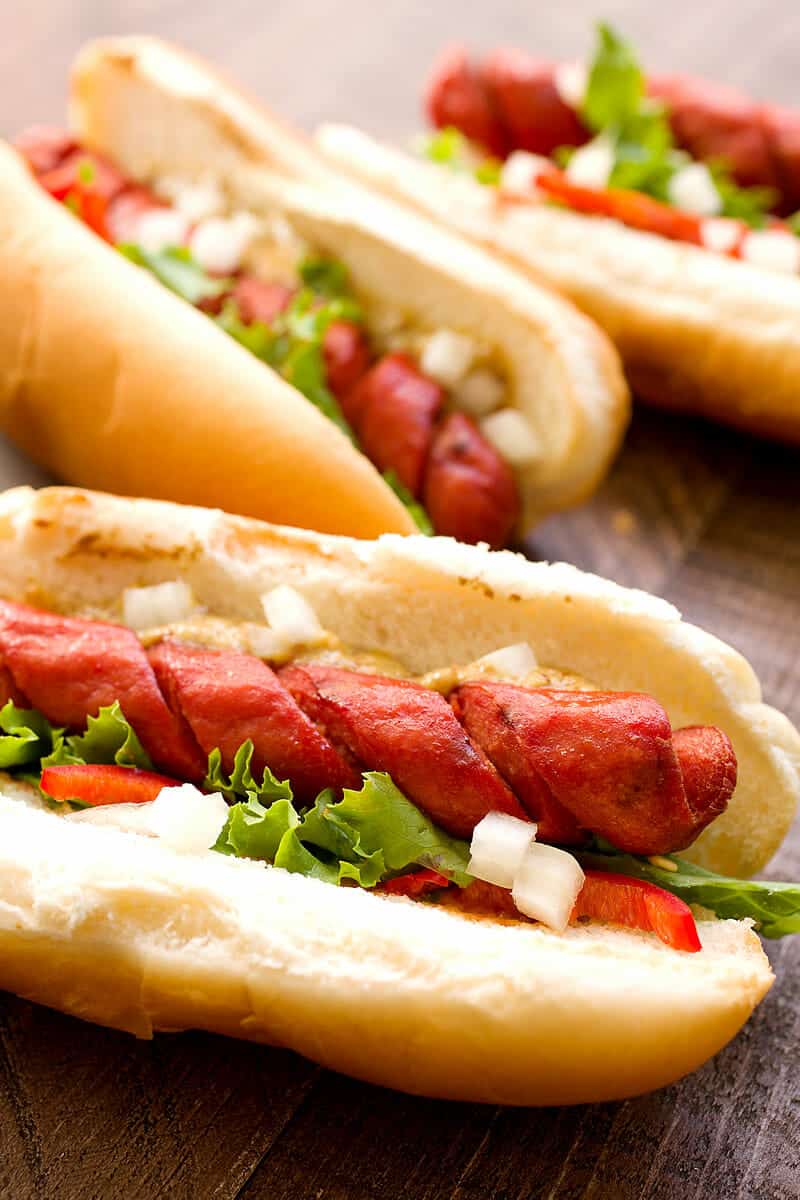 5 Responses to “The Spiral Hot Dog” Leave a comment