During the day, when I’m at home by myself, I drop the thermostat way down in our house to save energy (and dollars). I don’t mind the cold and just bundle up in sweatshirts and hoodies while I work.

But, by dinner time, the chill has completely set in and even though the thermostat will slowly climb throughout the night, it’s takes more than that to bring my frosty limbs back.

Soba Noodles with Mushrooms to the rescue!

This recipe for Soba Noodles with Mushrooms has a few odd ingredients, but if I’m being honest most of them are optional. The broth can be simmered together quickly for an hour or so or cooked longer in a slow cooker while you are out. Either way, it’s savory and chill-crushing.

And don’t forget that soft-boiled egg. It’s easier than you think!

Soba Noodles with Mushrooms, savory bowls that start with an easy homemade mushroom stock. Topped with loads of fantastic toppings.

1) In a large pot, add stock ingredients and bring to a slight simmer. Cover and let the stock simmer for about an hour. Strain out solids and return liquid to a simmer, uncovered, to let it reduce slightly.

2) In a medium skillet add a drizzle of olive oil over medium heat. Then add sliced mushrooms and cook until mushrooms lose their liquid and brown slightly. Keep warm.

3) Cook soba according to package in simmering water. Be careful not to overcook. When done, drain soba and toss with one tablespoon of sesame oil.

For eggs:
1) Bring about 1/2 inch of water to a boil over medium high heat in a pot big enough to hold your eggs in one layer.

2) When water is boiling, add eggs straight from the fridge.

4) Uncover pot and run cold water over eggs for 30 seconds.

5) Peel eggs starting with the larger end of the egg and slowly working up the egg. Cut eggs in half and serve in bowl.

I have a crazy assortment of dried things in my pantry. I sort of collect them. When I’m dying for some good broth, I raid my dried area and toss in anything that looks good.

On this day that broth included a whole bunch of dried Porcini mushrooms, some Kombu strips, a handful of dried black fungus, and some red chiles.

This is kind of a pish-posh of ingredients and I don’t really expect you to have them all or use them all.

I would say the most important ingredients, in order, are:

Believe it or not, the last two ingredients are getting more common and you can find them in some grocery stores and definitely any Asian market.

If you are cooking this quickly, bring a pot to a simmer and gently simmer the ingredients, covered, in about 10 cups of water. Simmer this stuff for at least an hour to infuse the flavors.

Alternatively, you can absolutely toss everything in a slow cooker and set it to low. Let that work for 4-6 hours and you’ll be in excellent shape.

The only important thing to note on this broth is that it’s completely savory, but has no real seasonings at this point. It you serve it as is, it’ll be disappointing.

Be sure to season the broth, either in the pot or by the bowl with dashes of soy sauce, rice wine vinegar, and sesame oil to really bring it to life. Taste as you go. There’s no exact amount of seasoning that you need.

When the broth has simmered, strain out the solids and then return it to the pan to let reduce on a simmer while you prepare the other ingredients.

Well, obviously, for Soba Noodles with Mushrooms you need noodles. You could use any noodle honestly, but I love soba. It cooks quickly so be careful not to overcook it.

After you drain the soba, toss in some sesame oil to keep the noodles from sticking.

I also recommend sauteing some fresh mushrooms for the bowls. Cremini would be the easiest but I also like to toss in some oyster mushrooms. You don’t need a bunch because the broth has a lot of flavor, but it does give the bowl a meaty feel if that makes sense.

I just sauteed my ‘shrooms in a drizzle of olive oil for a few minutes until the reduced and browned slightly.

The other very important topping for Soba Noodles with Mushroomsis the egg!

I’ve written about soft-boiled eggs before and I encourage you to check that post out to see how to really make them without much trouble. I’ve had great success with that method.

You could also just fry the egg quickly though if that’s more your style. Either way, but get an egg in there some how.

Keep your house cool and your meals warm!

If you have questions on the broth or want other substitutions, leave a comment! 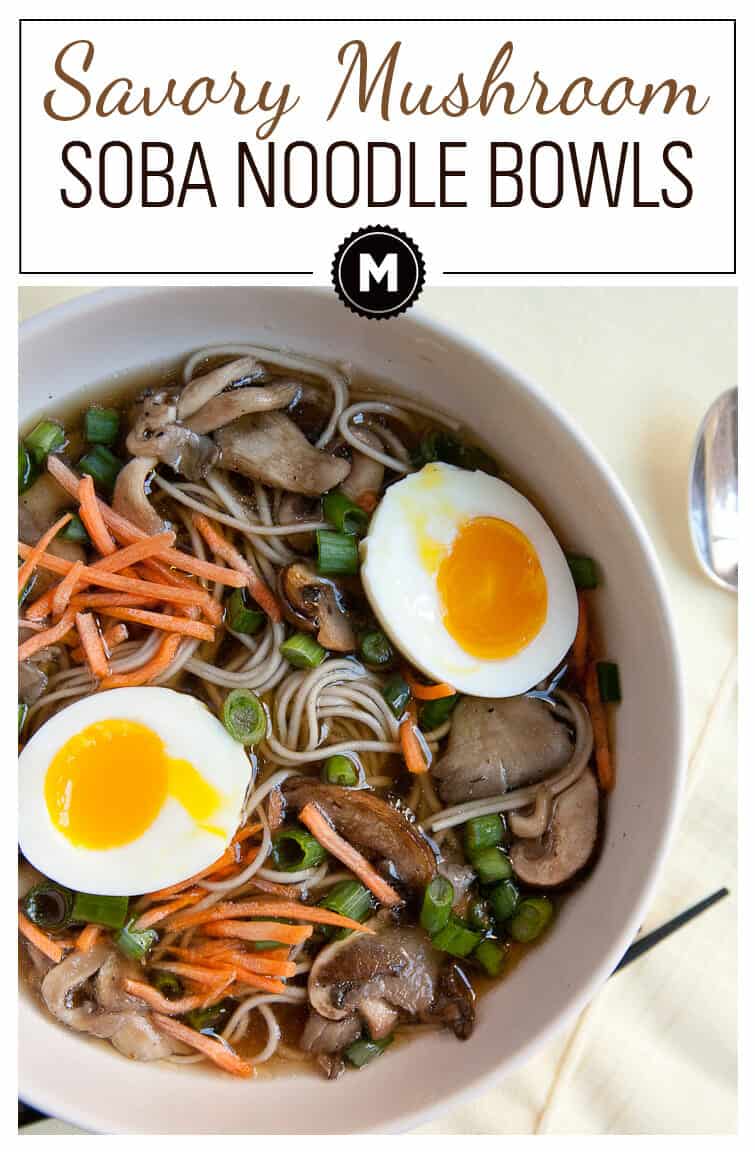