Okay. I have some words.

Did I have to look up delicious in the thesaurus to find those words? YES.

What I can promise though is that if you cook up some of this savory stuffed french toast the next time you are hosting friends or family for breakfast, the only words they will say is “OH DAMN!”

The finished breakfast has a similar flavor profile to my stuffed corn cakes (also a huge hit), but the secret is that these are actually easier to make. Like… they aren’t really hard at all. I won’t tell if you don’t.

1) Chop ham into small cubes. In a medium skillet over medium heat, add ham and cook until it’s browned in spots, just a few minutes.

2) Let ham cool slightly and then stir together with grated cheese and scallions.

3) Whisk together milk, eggs, and cinnamon with a pinch of salt in a square baking dish.

5) Using a serrated steak knife, cut each piece of bread down the middle, being careful not to cut entirely through the bread. Use the knife and your fingers to make a pocket in the bread.

6) Stuff each piece of bread with the ham and cheese mixture. Try to be careful not to tear through the bread, but you can also use a heavy hand on the stuffing. The bread can hold it.

7) After you’ve stuffed all the pieces, heat a griddle over medium heat.

8) Dunk the pieces of bread, one at a time, in the milk and egg mixture. Leave it in for a few seconds on each side so it absorbs the mixture. Don’t leave them in so long that they get soggy though.

9) Melt butter on griddle and add stuffed french toast pieces. Cook for about 4-5 minutes per side until the toast is golden brown. Err on the side of cooking them for longer over lower heat. Also, be sure to stand the toast up on the two long ends for a few minutes also to really sear the French toast on all sides.

10) I like to cut each piece in half after it cooks to show off the stuffing and also make it easier to eat.

You could use a lot of different fillings here. If you wanted to do a vegetarian version, I think it would be fine to use some sweet corn with cheese and scallions or maybe some diced and sautéed peppers.

I went big on the flavor though and sautéed some ham. You just want to cook the ham over medium-high heat until it takes on some color and gets crispy in parts. It should cook pretty fast. Note that you will need a ham steak for this and not deli meat ham. Don’t try to sauté deli meat ham, people.

Once the ham is cooked, stir it together with grated cheese and minced scallions. Pretty hard to go wrong with these flavors.

The trick is to start with a full loaf of French bread. It’s okay if it’s a day or two old. Cut the loaf into very thick 2-inch slices. You could even go a bit bigger if you want. One loaf of bread will get you 4 or 5 good slices.

One of these slices is more than enough for a serving.

Then use a smaller serrated knife (like a steak knife) to cut a pocket into the bread slice. Don’t cut all the way through the slice though. Basically make like a wide pocket. It should resemble a hot dog bun with the ends still attached.

Next, stuff this sucker FULL. Don’t be shy, but be careful not to tear through the bread (if you do though, it’s okay).

They should be stuffed really full.

Next step is very French toast like. Whisk together some eggs, milk, and a pinch of cinnamon and salt. Dunk each piece of stuffed bread in the custard mixture and let it soak up the custard for a few seconds. Don’t leave it in there too long, but give it a few seconds to absorb some of that goodness.

Then using a griddle or large nonstick pan, cook the French toast pieces in some melted butter over medium heat.

The trickiest part about these isn’t actually the stuffing part. It’s controlling the temperature. If you cook them too hot, they will burn on the outside and be raw on the inside (custard and unmelted cheese)!

So err on the side of a lower heat and let them cook for longer. 5-6 minutes per side should get you there, but don’t be surprised if they need a few extra minutes. They should feel crisp and dry to the touch on the sides.

Because these are so thick, I also recommend standing them up on both ends for a few minutes to sear on the edges.

When these come out of the pan, slice them in half for easier serving. Once big piece is a really hearty serving.

Just like any French toast, syrup is all you need. And yes… syrup and cheese go together just fine.

Okay. So it turns out I had like close to 700 words for this savory stuffed French toast.

It’s far and away my favorite brunch item I’ve made in awhile. For how delicious they are, they should be at least twice as hard to make.

Take a plunge into the world of stuffed breakfasts. Make these and make people go, “OH DAMN.” 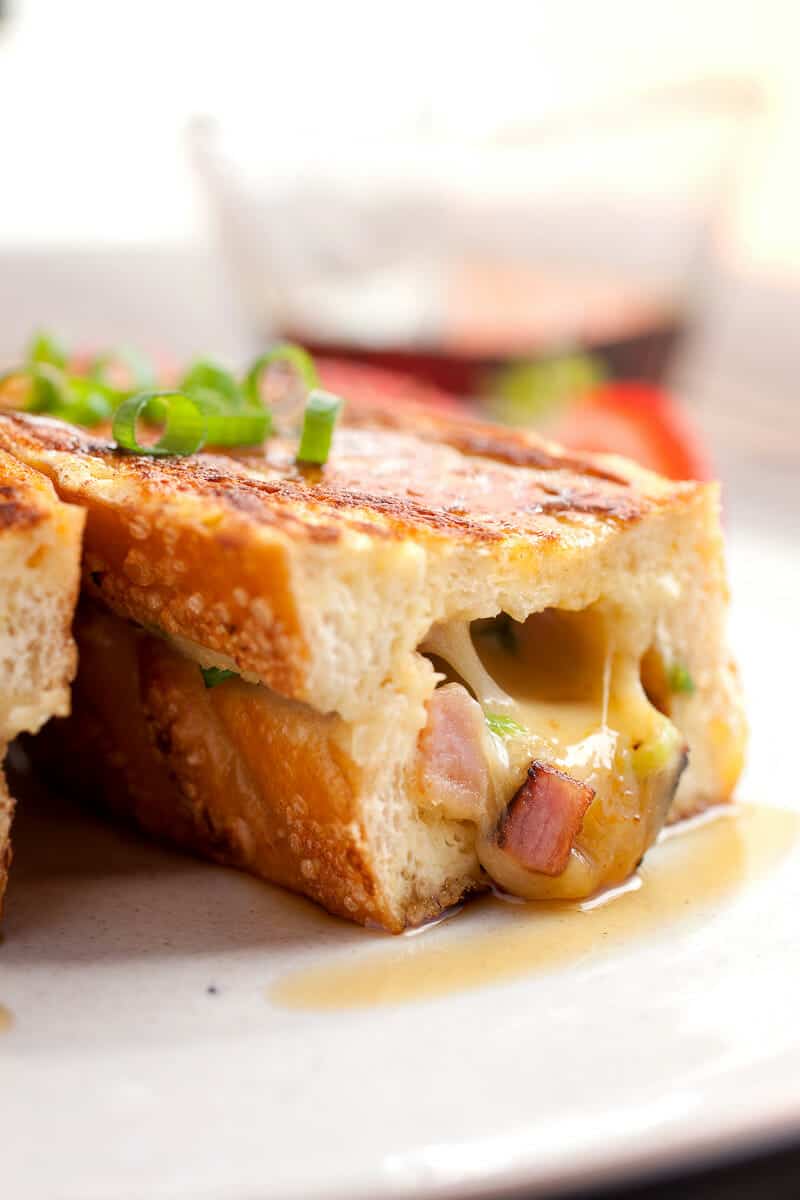