This is the conversation that Betsy and I had while eating this meal (more or less).

Betsy: So, how was your day?
Nick: Pretty good. I made this cheese.
Betsy: Wait. You made the cheese in this dinner?
Nick: Yep.
Betsy: It’s really good, but… your life is weird.

To be honest, I’ve had making this kind of cheese on my to-do list for awhile. I had heard rumors that it is pretty easy, but at the same time it seemed like science and I’m pretty bad at such things.

When I saw it in the most recent Cook’s Illustrated though, I knew I had to give it a shot because I figured their method would be the most likely to work.

Even though I almost ate all of the cheese that I made, I did manage to save enough to stir it into a spicy spinach sauce to make the traditional Indian spinach dish (Saag Paneer) that I love so much.

Adapted from a Cook's Illustrated recipe.

For the Cheese:
1)Line a colander with a few layers of cheesecloth. In a large pot, bring milk to a simmer. Stir in salt and buttermilk. Let sit for about two minutes.

2) Pour milk mixture through cheesecloth and let drain for 15 minutes. Pull edges of cheesecloth together and press out as much liquid as you can.

3) Wrap cheesecloth tightly in a ball and lay it on a few paper towels. Press it with a cutting board and some weight for 45 minutes.

4) Unwrap cheese and crumble or dice cheese. Let it air dry a bit while you make the other dish stuff.

For the spinach:
1) Wash spinach and turnip greens well and chop off any large stems. Then microwave on high for 3 minutes until they are wilted.

2) Chop 1/3 cup of both the spinach and greens and set them aside. Add the rest of the greens to a blender.

3) Add butter to a large skillet. When melted, add ground spices and cook for about 30 seconds over medium heat.

4) Add onions, garlic, ginger, and jalapeno along with a pinch of salt. Cook until the veggies start to brown slightly, about 5 minutes. Stir in tomatoes and let cook until the mixture is pretty dry, another few minutes.

5) Transfer half of this onion mixture to the blender along with water and 1/4 cup peanuts or cashews. Blend until mostly smooth. Some chunks are fine.

6) Return blended sauce to skillet with the other half of the onion/tomato mixture (still chunky). Bring to a simmer over medium heat and stir in set-aside spinach and greens. Season with salt and pepper. Stir in buttermilk.

7) Gently fold in cheese cubes and cook for another 1-2 minutes just to heat everything.

8) Serve over rice or with flatbread with cilantro and peanuts.

Even though the spinach sauce has a dozen ingredients and the cheese has only three, I was more concerned about the cheese.

It worked out fine though. My only advice, if you decide to make this, is to make sure you use a larger colander than I did. Mine was overflowing.

It’s a really simple process though. Just bring your milk to a simmer and stir in the buttermilk and salt. Then let it sit for a few minutes.

Pour that through your cheesecloth lined colander and let it drain for about fifteen minutes. 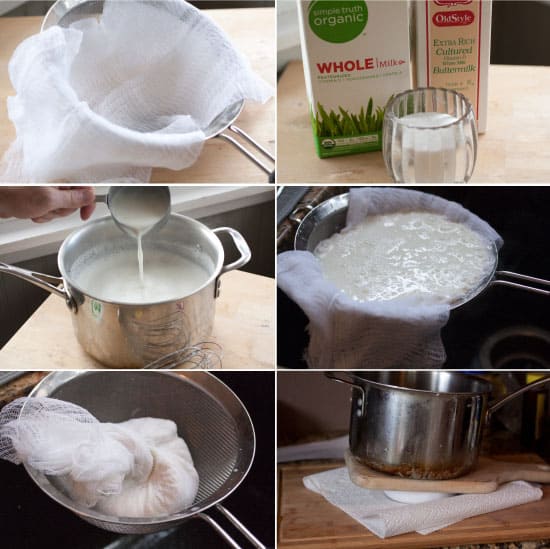 Once the mixture has drained a bit, wrap the cheesecloth tightly and squeeze out as much liquid as you can. Then put the ball of cheese on a paper towel with some weight on it.

Let it press for about 45 minutes and then you can unwrap the cheese and slice it up into cubes.

I found the cheese to be a bit better if you let it air dry for 10-15 minutes. It dries out and has a firmer texture which is nice.

It’s really good though and I was kind of amazed by how easy it was and how much cheese it actually made.

You could use all spinach, but CI recommended using mustard greens as well for a bit of extra flavor. I chose turnip greens which also worked.

Basically just rinse all your greens and then chop off any large stems. Add them to a large bowl and microwave them on high for 3-4 minutes until they are wilted. You might have to work in batches.

Chop up enough spinach and greens to equal 1/3 cup of each and set it aside. Then add the rest of the greens to a blender.

I definitely think you need a blender or food processor for this dish to really work although if you diced everything really finely you could just make a really rustic version of the sauce I guess.

Meanwhile, melt some butter in a large skillet. Then add your ground spices, diced onion, ginger, garlic, jalapeno, and a pinch of salt. Let that all cook until the veggies are starting to brown a bit.

The spices will turn really fragrant and your kitchen will smell instantly like your favorite Indian food restaurant.

Then add in your canned tomatoes and let that all cook together for a few minutes.

Add half of the onion mixture to your blender along with a cup of water and a handful of peanuts or cashews.

You should have a pretty full blender at this point!

I recommend letting this cool for a bit before blending it so you don’t run the risk of flinging hot stuff all over your kitchen.

Eventually, blend it up though and you’ll be left with a nice green sauce that is really flavorful.

Add this back to your skillet with the unblended onion mixture and the reserved greens that you chopped earlier.

Stir in the buttermilk and season with salt and pepper. Let it cook for a few minutes.

Then just gently fold in the cheese and cook it for another minute or two so everything is warm. Be gentle with the cheese or it will just crumble into super-tiny pieces.

Serve the stuff right away over rice with some cilantro and peanuts.

This Saag Paneer may not exactly be a weeknight dish, but it’s definitely worth it to try it out on a weekend some time.

The cheese making was really fun, I thought, and the flavors in the dish are really authentic and wonderful.