Whelp, it’s that time of year. The time of year where I’ll find myself staring at a huge pile of tomatoes at a market and wondering “How many of these can I physically carry home?”

When tomatoes are ripe and in season I tend to not fuss with them too much. I eat them sliced raw with a little good olive oil and salt. For breakfast though, I like to make this quick tomato fry up which is inspired by a full english breakfast but lighter on the meat and beans.

It’s not incredibly difficult and is kind of more of a concept than an actual recipe. It’s really great this time of year though when tomatoes are at their best. Embrace the tomato fry up!

This is the season when tomatoes are at their best. This is based on the English full breakfast minus a few things and plus a few!

1) Cut potatoes in half and boil them in salted water until they are fork tender, but not completely mushy. You want them to have some bite to them still. They will probably need to boil for around 7-8 minutes. Drain potatoes and rinse them with cold water. Then pat them dry.

2) In a large sturdy skillet, like a cast iron skillet, add a drizzle of oil and the breakfast sausage over medium-low heat. Also toast bread in the pan if you want.

3) Once bread is toasted, remove it and add the potatoes as well as a second drizzle of oil if pan is dry. Season potatoes with season salt and pepper. Let them cook for 5-6 minutes until they start to get nice and crispy. Turn heat up a bit if they are cooking too slowly.

4) When potatoes are getting crispy, move them to one side of the skillet. Add in halved tomatoes and scallions and let cook for 2-3 minutes.

5) Add a fresh drizzle of oil in the center of the skillet and crack in 1-2 eggs. Let eggs cook until the whites are mostly set, then cover eggs with a heat-safe bowl so they can steam (or you can flip them for over-easy). Season the entire fry-up with salt and pepper and sprinkle with fresh oregano.

Divide the fry up between two plates. Serve each plate with an egg, a piece of toast, and all the other ingredients piled up!

The basics of this breakfast are simple and you should feel free to substitute stuff to your liking. Want bacon instead of sausage? Make it happen! Want to go full on veggie? Toss some mushrooms in!

Really good tomatoes are a must though. I used a few heirloom tomatoes that were actually slightly underripe which is fine since they will cook a bit anyway.

Most importantly, don’t slice or cut the tomatoes. Just cut them in halves. If you chop them too much they will dissolve in the skillet.

I really like potatoes with my fry up and to make sure they cook quickly in the skillet I recommend boiling them for 6-8 minutes first so they are tender. That way you can just crisp them up in the skillet. It’s the same method I use for my home fries.

You don’t need a ton of potatoes and I like using the smaller new potatoes.

Start the fry up in a large skillet, probably the biggest you have, 12-inch at a minimum and 14-inch would be best. Add a drizzle of oil, the sausage, and a slice of bread over medium-low heat. Let the bread toast and the sausage begin to cook down.

When the bread is toasty on one side, take it out of the skillet. We need that room for other stuff!

The potatoes and the sausage take the longest to cook so add the boiled potatoes to the skillet and season them with some seasoned salt. Let this all cook for 6-8 minutes until the potatoes start to get crispy. You can turn up the heat a little at this point if you want.

Once the potatoes are browned on the edges, move them all to one side of the skillet. It’s okay to kind of pile them up. If the skillet is dry, add another drizzle of oil and add the tomatoes and scallions. Add the tomatoes cut-side down so they get a nice sear on them.

Once those sizzle for a minute or two, crack an egg or two in the center of the skillet. You can either do these sunny-side up or flip them for over easy.

Personally, I like them sunny-side up. After the whites are mostly set, I put a heat-safe bowl on top of the egg so it steams lightly. It only takes a few seconds like this to finish the egg.

Finish the fry up with a sprinkle of salt and pepper and some fresh oregano! 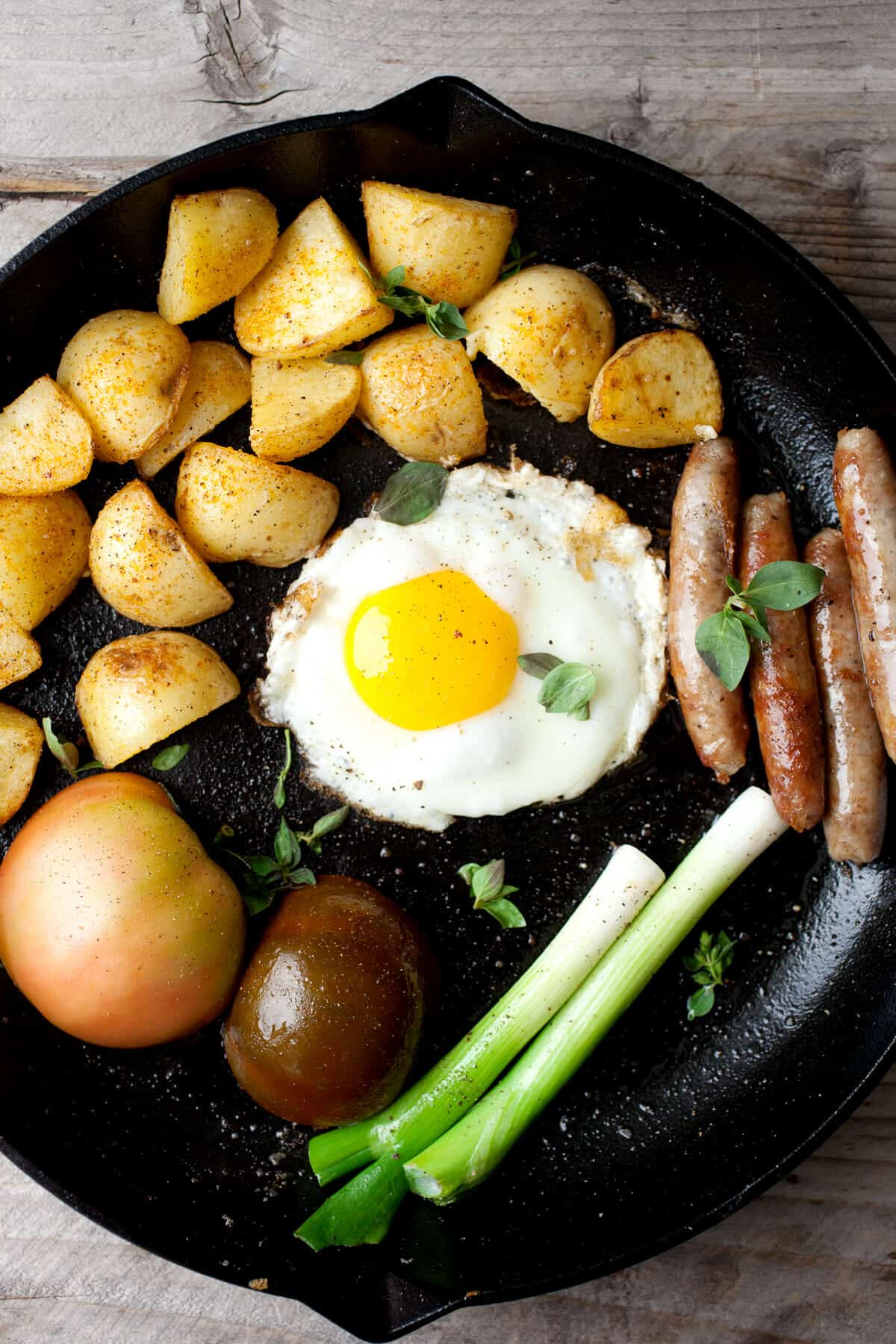 4 Responses to “Quick Tomato Fry Up” Leave a comment