This post is sponsored by HERDEZ® Salsa—the #1 salsa brand in Mexico and a staple in Mexican kitchens for over 100 years! I used their Guacamole Salsa for these Pulled Pork Tortas. Be sure to follow HERDEZ Salsa on Instagram for more great recipes! 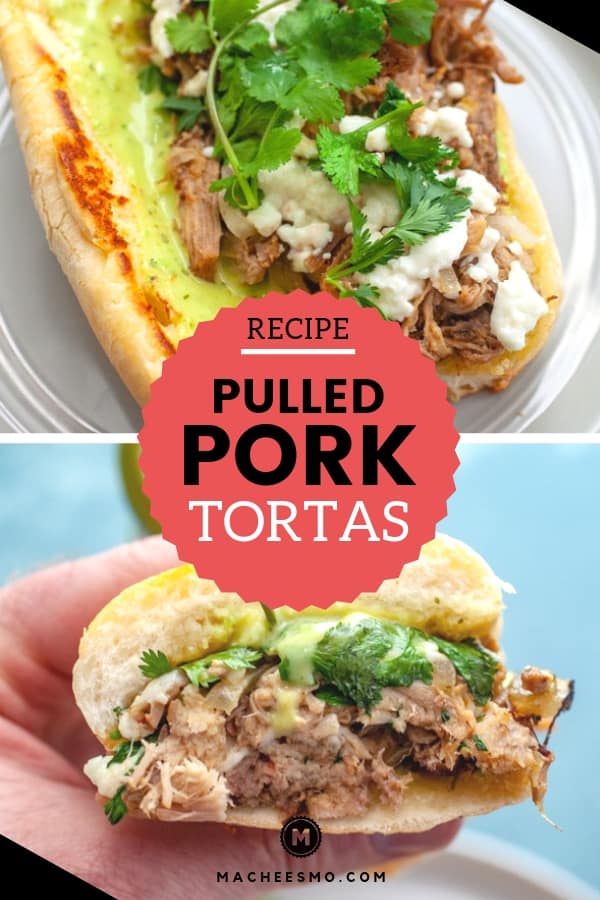 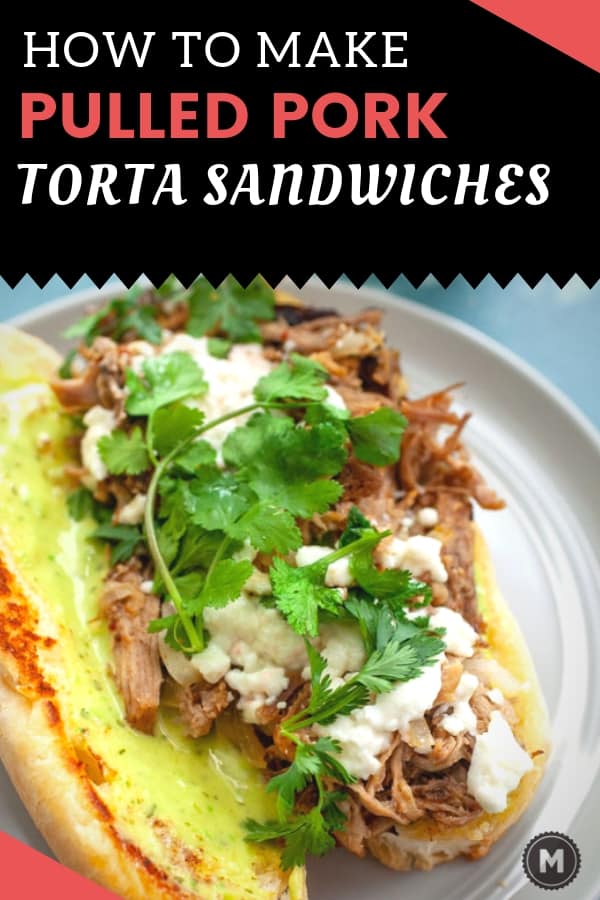 To make these tortas doable in a reasonable amount of time, I made the pulled pork in a pressure cooker, but if you don’t have one, you could toss all the ingredients in a slow cooker and cook it for about 8 hours and end up with the same result.

I tossed my ingredients in an Instant Pot and it was ready for sandwich making in about 90 minutes (including preheating time and prep).

Once you have the pulled pork made, the sandwich is really basic, but the flavors are classic and delicious. Sauté onions in the skillet with some pulled pork and finish off with as much fresh cheese and cilantro as you’d like.

For the bun, I like to slather mine with HERDEZ Guacamole Salsa. If you haven’t tried this salsa yet, it’s a must-have in my opinion. We always have a jar of it in our fridge. I’m not saying that just because they’ve become a partner! We actually had some in our fridge anyway! Ha!

I love this salsa because it has a rich creamy guacamole texture, but is also made with tomatillos, onions, jalapeno peppers, and cilantro. HERDEZ always uses fresh, simple, quality ingredients in their salsas and this one is no exception. HERDEZ is available in stores nationwide so be sure to check out the Mexican food aisle next time you’re at the grocery store or order some online here.

It’s absolutely perfect on any taco, but it’s also great as a late-night snack with chips.

So, make some tortas! They are easier than you might think and a definite crowd pleaser, especially after a hard day!

Have you had a Torta?!! It’s a Mexican Sandwich that’s usually filled with griddled meat, onions, and cheese, all stuffed in a soft roll. SO GOOD. I made this version with pressure cooker pulled pork and slathered it with Guacamole Salsa!

1) Chop pork shoulder into 3-4 large chunks and place in an Instant Pot or pressure cooker with cumin, oregano, salt, pepper, chipotle peppers, Adobo sauce, beer, and orange juice. Seal pressure cooker, bring to pressure, and cook at high pressure for 45 minutes. Turn off pressure cooker to allow pressure to release naturally for 10 minutes, then you can release it manually and remove the lid.

2) Remove pork pieces from the cooker and shred with a fork. Pour off cooking liquid. Return pulled pork to a bowl and moisten with cooking liquid. I would add about a cup of the cooking liquid to the pork. Feel free to add more if yours still seems dry.

To make a torta:

1) Add a drizzle of olive oil to a large cast iron skillet over medium heat. Add a small handful of sliced white onion to the skillet and cook for a few minutes until onions soften.

3) Slice your bun in half. Move your pulled pork mixture to one side of the skillet and toast your bun, cut side down, on the skillet.

5) When bun is toasted, slather with HERDEZ Guacamole Salsa on both sides. Then scoop your pulled pork mixture into the toasted bun, fold over, and cut in half. If you aren’t eating the torta immediately, wrap in foil to keep warm.

Leftover pulled pork will keep well in the fridge for a week or you can freeze it in an airtight container once it has cooled for up to 3 months.

You could absolutely toss the ingredients for this pulled pork in a slow cooker if you don’t have a pressure cooker, but if you are time constrained, this is a great option!

After 45 minutes at high pressure (plus time to heat up and cool down), the pulled pork is done!

I knew right about now that this was going to be a very good pulled pork torta! 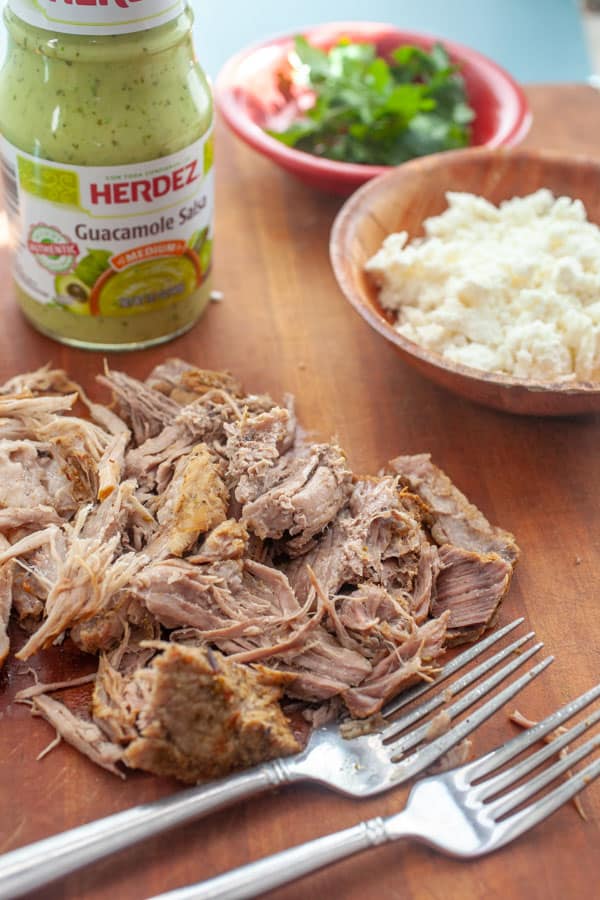 Now for the magic. Toss some onions in a skillet with a drizzle of olive oil and when they start to soften, add the pulled pork! Let that cook together for a few minutes.

Move your pulled pork into a corner of the skillet and pile on the cheese and cilantro. Then toast your bun! I like to use a soft bolillo roll for my tortas.

Now for the HERDEZ guacamole salsa! Slather it heavily on both sides of the bun!

Then scoop the skillet ingredients into the bun and you’re ready to go! 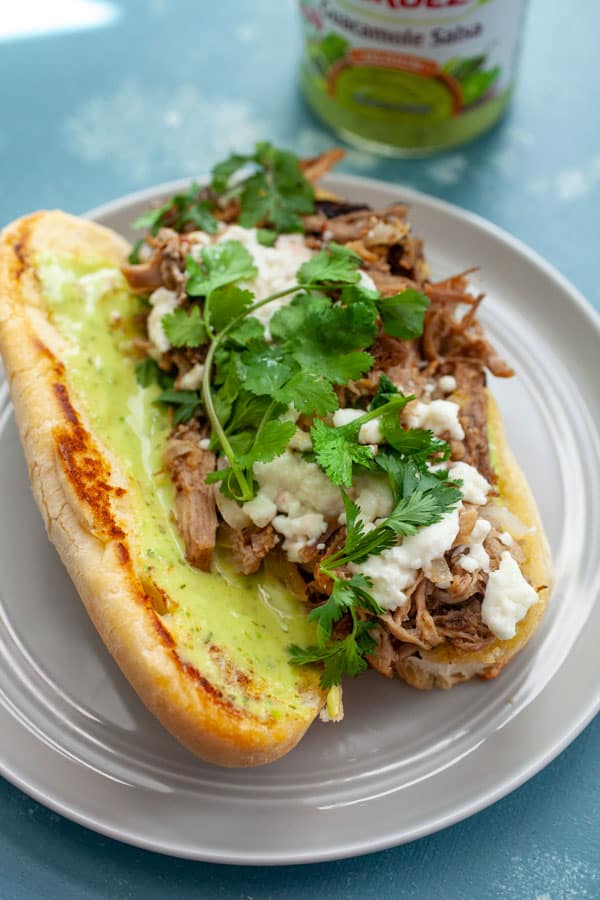 These Pulled Pork Tortas with Guacamole Salsa might just be my new favorite sandwich.

If you’ve never made a torta before, the time is now! 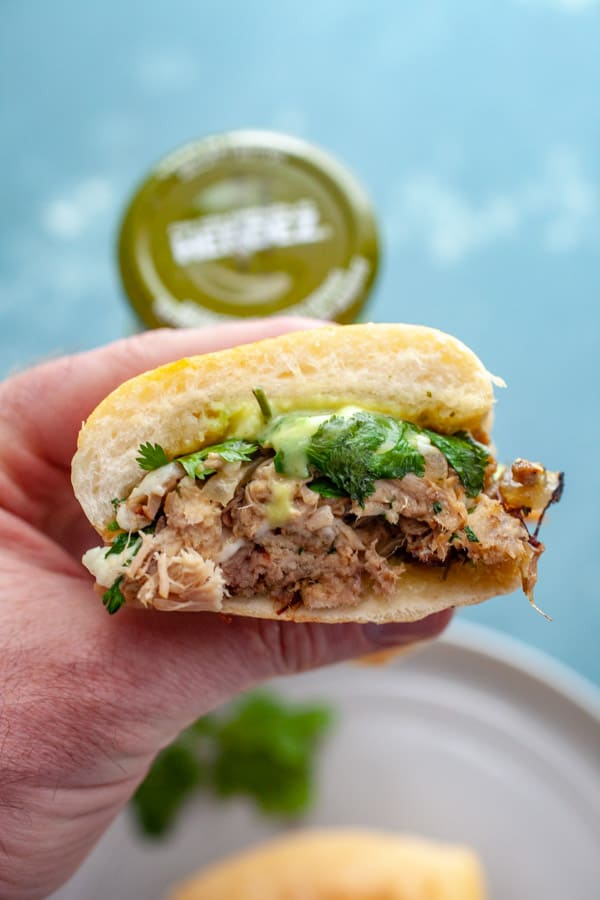 Here are a few other great Sandwich Recipes!