I was in charge of making some appetizers for a New Years party this year and while I made mostly dips like this and this, I also wanted to make something warm and more substantial.

So I made about sixty mini empanadas.

It was somewhat ambitious and there was at least one time where I was cursing at my decision. The end result was really awesome though.  Of course, you don’t have to make small versions of the empanadas. In fact, I wouldn’t recommend it because it’s sort of a pain.

The cool thing about these Pulled Chicken Empanadas is that you can freeze them before baking them and then move them straight from the freezer to the oven! So while they are a bit of work up front, they then will make for many quick dinners.

Homemade empanadas with a spicy chicken filling. This is a great make-ahead recipe, just freeze until you are ready to bake!

For dough:
1) Mix together flour and salt in a large bowl. Cube butter and use your fingers to cut the butter into the flour until it’s in very small pieces, almost like a sand consistency.

2) Add in egg yolks and warm milk and stir dough until it comes together. Knead the dough a few times with your hands. If the dough is very dry and won’t hold together, add a bit more milk. If the dough is too wet and sticky, add more flour by the tablespoon.

3) Once the dough is a nice even consistency, split it into four even pieces, wrap them in plastic and store them in the fridge for at least an hour.

For the filling:
1) Add whole chicken, bay leaves, and chile peppers to a large pot and cover with water. Bring to a simmer and simmer for about an hour until chicken is poached.

2) Remove chicken and spoon out chile peppers. Pour off and reserve cooking liquid.

3) Let chicken cool until you can handle it and then shred or chop it into tiny pieces.

4) Using a food processor, add the chile peppers (no stems but seeds are fine) plus 1 cup of cooking liquid and puree until smooth. It’s okay to add a bit more cooking liquid if it is really dry.

5) In your pot, add the olive oil over medium heat along with onions and minced garlic. Cook for about four minutes until they start to soften.

6) Add in tomatoes and chopped chicken. Add in as much of the chile puree as you want – to taste. I used all of it, but you may not want it super-spicy. I recommend starting with half of it and adjusting it to your liking.

7) Let the filling simmer for 10-15 minutes over medium low heat. Season with salt and pepper. Once all the flavors are combined, remove from heat and let cool. Once the filling is room temperature, stir in olives and cheese if you’re using it.

TO Make Empanadas:
1) Work with one piece of dough at a time, roll it out on a lightly floured surface until it’s about 1/8 inch thick. Then cut it into circles according to what size empanada you want. A small empanada would be a 3 inch round. A larger one would be maybe 6 inches.

2) Once your rounds are cut out, roll each round out a bit more to make it thinner. Then add a big spoonful of filling to the center of the round, leaving about 1/2 inch around the outside.

3) Brush outer edge with egg white and fold over the pocket, using a fork to crimp the edges.

At this point you can either cook the empanadas or freeze them for later.

To bake them, bake at 350 degrees Fahrenheit for 25-30 minutes until nicely browned. I recommend baking them on parchment paper.

To freeze, place empanadas on a baking sheet and freeze until solid. Then you can transfer them to a bag and store them until needed. You can move them right from the freezer to the oven and just add on 5 minutes to the baking time.

The dough for these empanadas is somewhere between a pie crust and an enriched dough like you would use for cinnamon rolls or something. It has plenty of butter to make it flaky but also some eggs and milk to give it a nice texture.

The dough is pretty simple to pull together. You don’t need any fancy equipment. Just stir together your flour and salt in a large bowl. Then use your fingers to work in the butter until it’s almost a sand consistency.

Next, stir in the egg yolks and milk until the dough comes together. Knead it for a few times in the bowl until it resembles a soft dough. If it’s too dry, add more milk. If it’s very sticky, add more flour.

Then just cut the dough into four equal pieces, wrap them in plastic wrap and store them in the fridge! 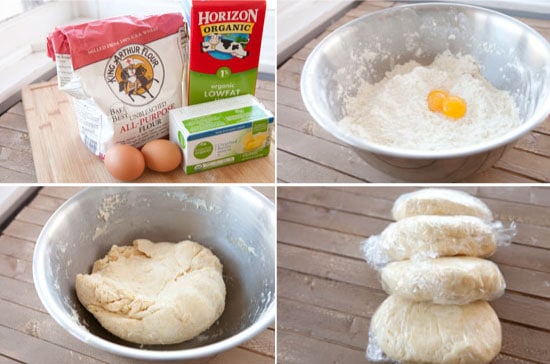 While the dough hangs out in the fridge, you can work on the filling for these. This filling recipe makes a lot and you might have some leftover which you can use for burritos or something.

But start the filling simply by putting a whole chicken in a big pot with dried chiles and a few bay leaves.

Cover it with water and bring it to a simmer. Simmer the bird for about an hour until it’s cooked. The peppers will obviously give off a lot of flavor as they cook also.

When it’s done, spoon out the peppers.

Remove the stems from the peppers and process them in a small food processor with about a cup of the cooking liquid from the chicken.

This will make a very delicious puree that’s on they very spicy side. We’ll add this back to the filling later.

Once the chicken is cool enough to handle, go ahead and shred it into pieces.

These pieces were too big. Make them smaller than this!

Put your large pot back over medium heat and add the oil along with a diced onion and some minced garlic. Let those cook for a few minutes to soften and then add the chicken and tomatoes to the pot.

Finally, add in the chile puree and use a few forks to continue to pull apart the chicken as it simmers.

I used all of the chile puree for my version and I thought it had just the right amount of heat. You could start with half the puree and see where that gets you though.

Also, season the filling well with salt and pepper.

It’s a good idea to let the filling cool before making the empanadas. It’s it’s hot, it’ll make the dough hard to work with.

Once the filling is room temperature though, you can stir in your olives and cheese straight into the pot.

When you’re ready to make some empanadas, work with one piece of dough at a time and roll it out until it’s about 1/8 inch thick. Then use a round to cut out your desired size. A 3-inch round will make a small empanada. A 6-inch round is about as big as I would go. It’s okay to re-roll the dough a few times to really maximize it also.

Once you have your dough punched into rounds, roll each round out a bit more and then add a heaping spoonful of toppings to the center of the dough. The dough is nice and stretchable, but do leave about 1/2 inch around the edges so you can seal the empanadas nicely.

Traditionally, empanadas can also have hard boiled eggs in them, but that’s not really my style so I left them out.

Once your filling is added, brush around the edges with egg wash (1 egg whisked with 1 tablespoon of water) and fold the dough over.

Use a fork to really seal the edges well. Poke a few holes in the top of the empanada so steam can escape as it cooks also.

If you are baking these right away, just cook them on a baking sheet lined with parchment paper for 25-30 minutes at 350 degrees.

They should be golden brown on top.

The very nice thing about these empanadas is that once you’ve made them you can stick them on a baking sheet and freeze them solid. Once they are frozen, you can transfer them to a freezer-safe bag and store them for months.

When you want to cook a frozen one, just move it straight from the freezer to a 350 degree F. oven. It’ll need to cook for about 5 extra minutes, but will turn out just as delicious as you if you made them right away.

I’ll be the first to admit that these Pulled Chicken Empanadas are a bit of work, but they really were tasty and they store really nicely. If you have a spare few hours, they might be worth the effort for you!