This post is sponsored by Land O’Lakes, Inc. Check out their full line of products including the Land O Lakes® Butter I used for this recipe. Be sure to follow them on Facebook and Twitter for more great recipes.

Many years ago, in the time I describe as BB (before baby), I used to cook at a local shelter in Grand Junction, CO. The big meal gap they had was breakfast where they would frequently have a hundred hungry people lined up. In the winter, warm meals were very welcome and I saw it as a chance to use a skill I had to really help people.

The shelter would get donations, but nothing fancy, of course. Generally, I would end up bringing some extra cheese or butter along with me just to make something a bit better. It’s the little things, right?

This potato casserole with sausage gravy recipe was one of my go-tos when I was cooking breakfast at the shelter. Because it starts with raw potatoes, it has a long bake time which would give me plenty of time to make the gravy (always a hit) and make as much coffee as possible.

I used to make huge batches of it very early in the morning, but I pared this recipe down so it’s doable at home. It’s hearty, comfort food, but pretty much always results in a smile.

Once my life calms down a bit, and my kid can put on his own pants, it’s on my list to start doing this sort of thing again in the Denver area. I really felt great about being able to contribute and help out in my local community. Even though I would be tired the rest of the day from waking up early, I knew it was a small price to pay!

This is slow comfort food at its best. Homemade simple potato casserole with fresh potatoes topped with sausage gravy!

1) Preheat oven to 375 degrees F. Peel potatoes and grate them into a bowl of cold water. Rinse grated potatoes well to remove starch. Drain and pour out onto paper towels to dry a bit.

2) In a large bowl, stir together sour cream, cheddar cheese, salt, and pepper. Then mix in grated potatoes. Mix together well using your hands if necessary.

4) Bake potato casserole at 375 degrees F. for 75-90 minutes until potatoes are very crispy around the edges and tender in the middle.

5) For sausage gravy, cook sausage in a medium pot or skillet over medium heat, breaking up the sausage in the pot as it browns.

6) When sausage is well browned, stir in flour and cook for a minute. Then slowly add in milk, stirring constantly to avoid lumps. You’ll need at least 2 cups of milk, but might need up to 3 to get a nice consistency of gravy. It should be thick, but pourable. Season gravy with salt and pepper.

7) When potato casserole is done, cut it into serving pieces and serve with sausage gravy. Garnish with fresh chives or just dig in!

This recipe doesn’t have many ingredients, but it does require patience and time as the potatoes bake. If you used frozen hash browns for the potatoes, it would cook quicker, for sure, but would lose some texture. You can easily make the casserole in advance if you want!

One of the most important steps when using fresh potatoes is to grate them and then dunk them in water to rinse off as much starch as possible. This will prevent the potatoes from ending up gummy in the dish.

After you rinse them, just drain them really well. Some water is fine, but you don’t want pools of water.

In a large bowl, stir together the cheddar cheese, sour cream, salt and pepper.

Then add in your grated potatoes. I recommend using your hands to really combine everything well. A spoon won’t do the trick!

Spread this potato mixture out in a 9×13 baking dish. You don’t want it too thick or it’ll never bake all the way through. Be sure to grease or butter your pan lightly so the potatoes come out easily.

Drizzle the casserole with melted butter and bake this beauty for 75-90 minutes at 375 degrees. Yes. It might take an hour and a half for this to completely finish baking.

It’s okay, though. While you’re waiting, you can have some coffee and make some sausage gravy!

In a pot or skillet, brown some pork sausage over medium heat. Break it up as it cooks so there aren’t any large chunks.

Then stir in the all-purpose flour and cook for a minute or two to form a roux in the pot.

Add the milk to the sausage mixture in a slow stream, stirring as you add it to avoid lumps. You’ll need at least two cups of milk to make the gravy, but might need closer to three. It’s kind of an eyeball thing. If it gets too thin, just let it cook for a minute or two and it’ll thicken up.

Season the gravy with salt and pepper when it’s done!

You’ll know when that potato casserole is done. It’ll be crispy around the edges and tender in the middle.

Serve big squares of the casserole ladled with sausage gravy. If you want to get fancy you can garnish it with some fresh chives, but it’s great without it also!

Comfort good is good food in my book, and this potato casserole with sausage gravy fits right in. 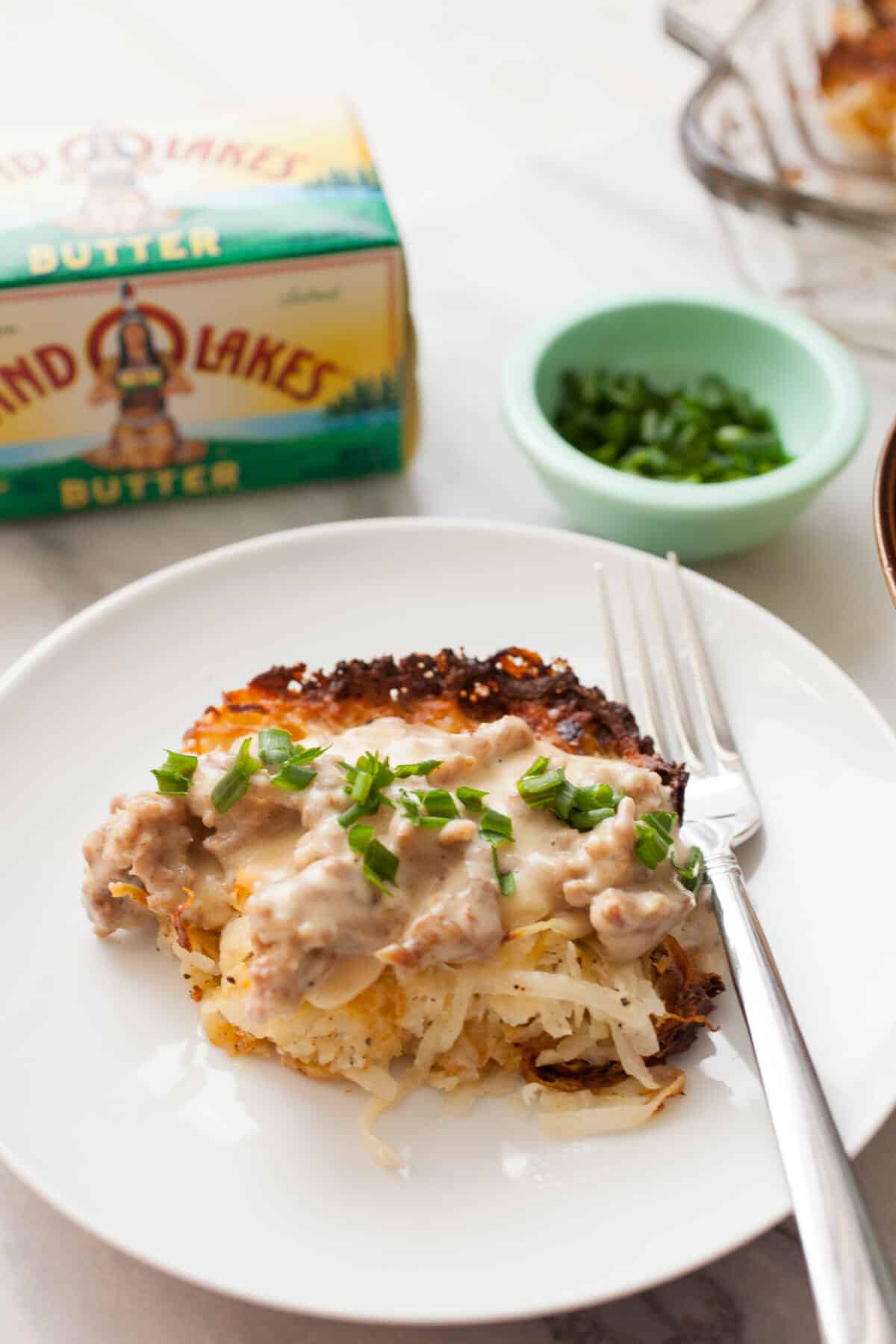 If you’ve had a special experience giving back to your community, leave a comment! Would love to hear some other stories!

5 Responses to “Potato Casserole with Sausage Gravy” Leave a comment