It has the perfect ratio of ingredients and ends up being perfectly crispy where it should be but still soft and tender on the inner parts. I hesitate to call a recipe perfect because I think things can always be improved, but this one is pretty darn close. I can’t think of anything I would easily change.

Given how delicious it is, this recipe also isn’t finicky and doesn’t have a lot of ingredients and spices. It’s basic stuff stirred together in a bowl and baked. One important step, as you can see, is to line the baking dish with parchment paper so you can literally lift the pie out and peel back the layers. YUM.

An all-in one Brunch masterpiece, this pie is everything you want in a breakfast dish. Shredded potatoes, bacon, veggies, and just enough cheese and egg to hold it together.

This recipe starts with bacon. I started thinking that a full pound of bacon would be too much, but after it renders down into crispy little bites, it’s the perfect amount. More would definitely be overkill in my opinion and less would leave you hunting and pecking for it in the pie.

Render the bacon in a large skillet over medium-low heat. After about 10 minutes, it should be nice and crispy. Then you can remove the bacon and pour off most the bacon grease. Leave a few tablespoons though so we can cook the leeks and kale!

The only tip with the veggies is to make sure you chop them into thin shreds. This way they kind of almost dissolve into the final breakfast pie. Season them with salt and pepper as they cook.

Now toss everything together in a bowl! Bacon, hash browns, kale, and cheese. You can either use packaged hash browns or you can peel and shred a pound of fresh ones. Just be sure to rinse them and dry them well if you use fresh ones.

Stir in the eggs and transfer it to a baking dish lined with parchment paper. It already looks good!

Bake the breakfast pie at 350 degrees F. for about hour until it’s crispy and delicious around the edges. Honestly, it’d be pretty hard to overcook this. I think you could bake it for an extra 20 minutes or so if you wanted it very crispy and it would be fine! 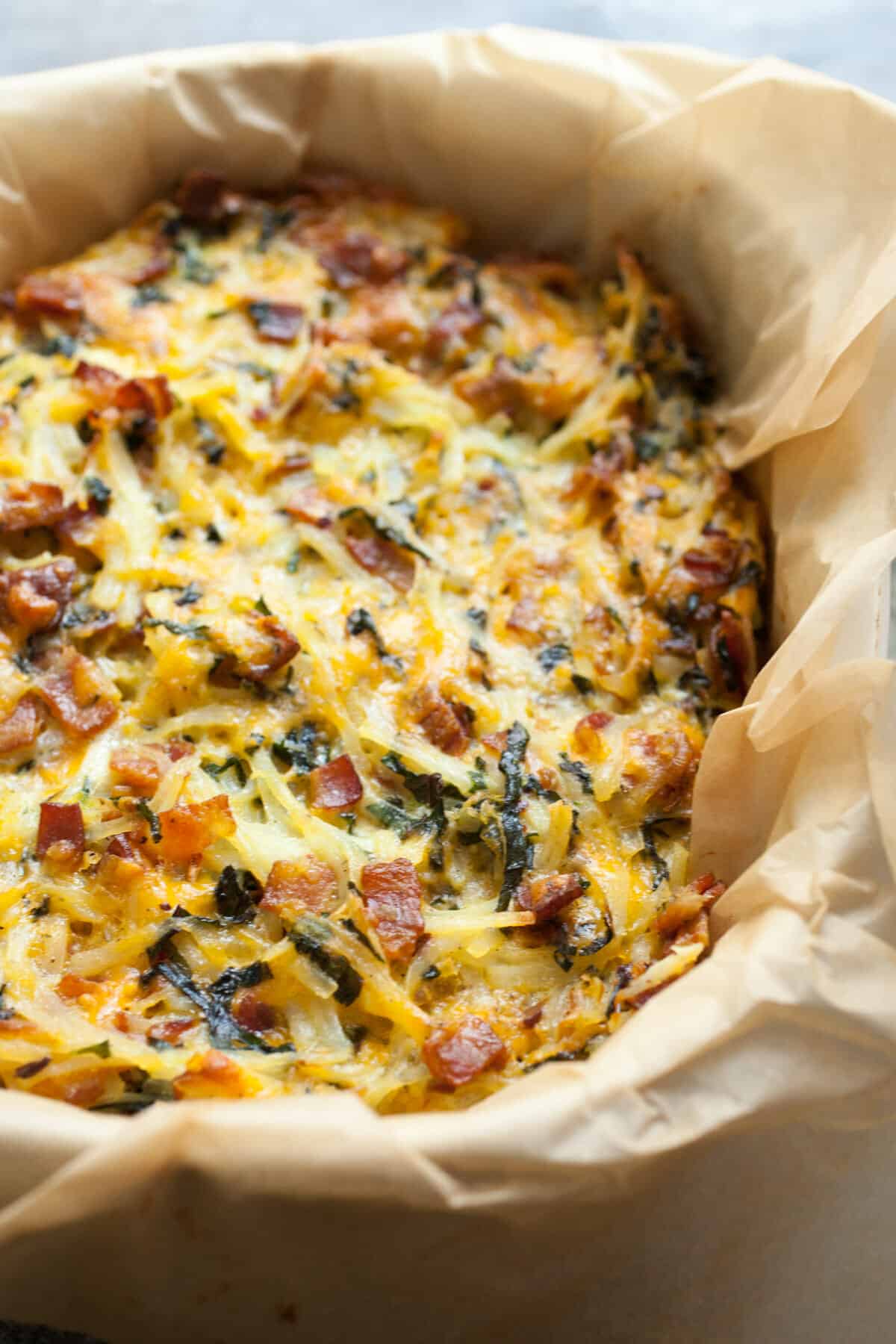 Once the potato breakfast pie cools for a few minutes, you can literally lift it out of the baking dish, peel back the parchment, slice it and serve it!

If you happen to have leftovers, you can store them in the fridge or you can also wrap it tightly and the pie freezes beautifully for a few months.

Sorry to add to the huge list of breakfast casseroles on the Internet, but you all needed this one. Trust me.