Betsy ran off for a weekend of skiing in Steamboat Springs a few weeks ago and left me at home with a fast approaching cookbook deadline.

When she came home, she barely mentioned the slopes, but said, “I had a sandwich.” I congratulated her on her sandwich but asked if there was anything specific about it.

She went on to describe this recipe for Peanut Butter Bacon Sandwiches. While this sandwich has no cheese in it, the final texture has a very grilled cheese feel to it. It’s really perfect after a cold day out on the mountain… so I hear…

1) Lay out the bacon strips on a sheet pan or on a cooling rack and bake at 350 degrees for about 25 minutes until the strips are very crispy. Let the bacon cool slightly and chop it finely.

3) Heat a large cast iron skillet over medium heat. Add one piece of bread, butter side down. Spread on about two tablespoons of peanut butter.

4) Add in a drizzle of honey, sliced banana, and a big handful of chopped bacon.

5) Top with a second piece of bread, butter side up. Cook for about four minutes and flip. Slice and serve immediately!

You can also make this sandwich in a panini press or press the sandwich between two hot cast iron skillets until it’s nicely toasted on both sides.

This sandwich only has a few ingredients but all of them bring some serious flavor.

Ok. The bread doesn’t really bring serious flavor, but you gotta put this stuff on something.

Let’s talk bacon because it’s obviously very important to this sandwich. Without it, the sandwich would be too soggy. The bacon brings a great crunchy texture and also  some saltiness.

You have to cook the bacon right though for all of this to work.

If you’ve read my best way to cook bacon post, you’ll know I like to bake my bacon on a raised rack so it gets very crispy. If you bake the bacon at 350 degrees for about 20-25 minutes, you’ll be in business.

You can cook the bacon any way you like though as long as it’s very crispy.

Once the bacon is done, just chop it up so it’s in nice bits.

When you’re ready to get started, lightly butter the bread. You can use any sandwich bread for this bad boy, but I used sourdough.

Normally I use a bit more butter when I make grilled cheeses, but because the other ingredients are so rich, I kept the butter very light. Just enough to get the bread browning nicely.

You can barely even see the butter on my bread slices.

Heat your pan over medium heat and add a slice of bread, butter-side down.

Then spread on two tablespoons of peanut butter and a drizzle of honey. I photographed this off of the pan, but putting it together on the pan works also.

Then add on your sliced banana and a big handful of bacon bits.

When it comes to cooking this creation, you have many options.

1) If you have a panini press, toss it in there until it’s browned. Done deal.

2) Cook it like a normal grilled cheese. Just cook it over medium heat, for about 4-5 minutes per side, until it’s lightly browned.

3) Or you use my crazy homemade panini setup. I heated two cast iron skillets, put the sandwich down, covered the sandwich with foil, and then put the second pan on top. It creates a hot press thing that works really well.

Any way you cook it is fine though. There’s nothing really to melt like in a grilled cheese so you just want to heat the filling through. Basically when the bread is toasted, it’s ready to go.

I had to take a big bite.

These Peanut Butter Bacon Sandwiches are comfort food pure and simple. The flavors are perfect together though and you could do much worse than have this in your lunch plans. 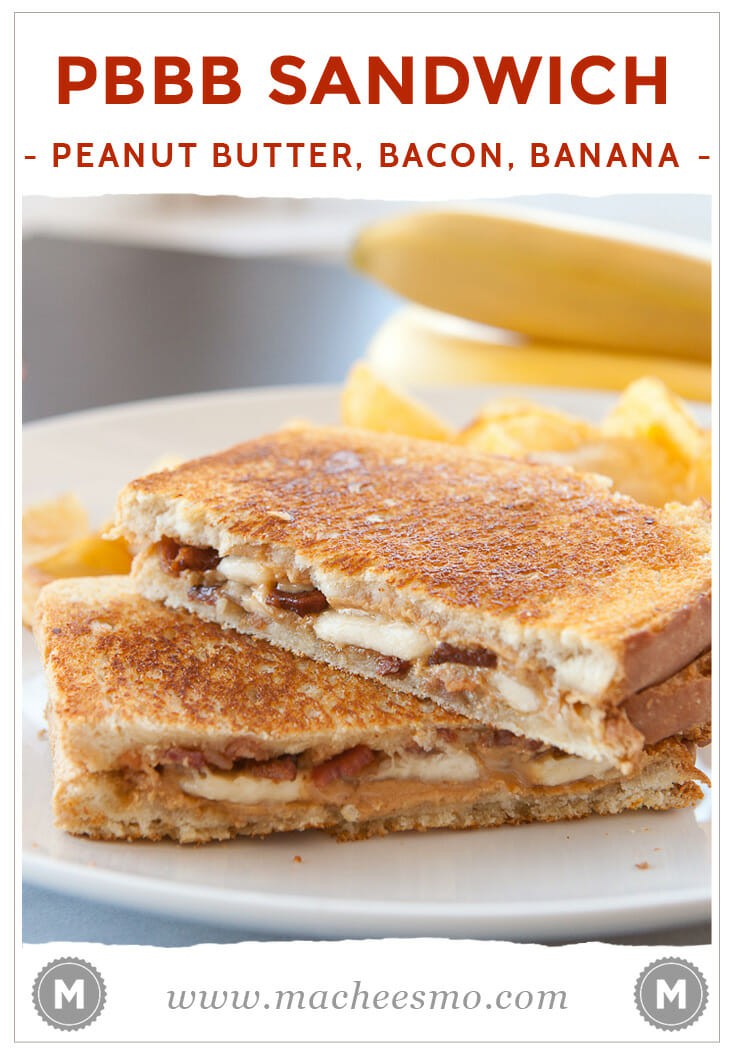