It’s the season of pies and some pies are just classics. I’m talking pumpkin, apple… you know the game. But, if you’re looking for something completely different, definitely try this Lavender Honey Pie. The filling is really easy to pull together and the creamy custard texture is like no other pie I’ve had.

It amazed me how few ingredients are in this filling. It’s so simple to make it seems almost like cheating. It reminded me a lot of the lemon buttermilk pie I made last year actually because it’s so simple but has complex flavor.

You could leave the lavender out if you can’t find it easily (check health food stores), but it adds some nice floral notes to the pie. I loved the combo and had more slices than I’d like to admit when it came out of the oven!

This is a simple pie with just a few filling ingredients, but the flavors are deep and rich. It’s a pie you might pass over on first glance, but will quickly become a favorite!

Recipe adapted from a Martha recipe.

Combine water, apple cider vinegar, and ice in a separate bowl. Add the liquid to the dry stuff a tablespoon at a time until the dough just comes together with some crumbs on the edges. You should need 4-6 tablespoons of the liquid.

Shape the dough into a round disc, adding more liquid in small drops if needed to get the dough to stick. Once the dough is in a solid disc, wrap it in plastic wrap and store it in the fridge for at least an hour, but overnight is best.

When ready to make pie, Preheat oven to 425 degrees F.

Roll pie crust out on a lightly floured surface until it’s roughly 10 inches in diameter. Transfer to your pie pan and trim edges to your liking. Poke some holes in the crust with a fork and line the pie with parchment paper or foil. Then add pie weights or dry beans to the crust.

Heat honey and lavender in a small pot over low heat for 5-10 minutes. Add butter and let steep for a few minutes off the heat. Strain out lavender buds and add other filling ingredients. Whisk together well and let filling cool for a few hours in the fridge (or make in advance).

Pour filling into pre-baked pie crust. Bake at 350 degrees F. for 30-35 minutes until center is just set. Remove and let cool for 30 minutes. Then slice and serve.

This pie crust is one of my favorites. It has a little apple cider vinegar in it which gives it some tang. It’s also super-flaky due to lots of butter!

Cut in the cold butter until it’s in pea-sized pieces. Then stir in the water/vinegar mixture until the dough forms a loose ball. Let it chill in the fridge for at least a few hours and then roll it out on a lightly floured surface.

If you can see chunks of butter in your dough, you did it right!

Then transfer the pie crust to a 9-inch pie pan.

Figure out some sort of design to do with the crust. I just use my fingers to crimp the edges a bit. Nothing fancy. Poke some holes in the crust also so steam can escape.

I think it’s best to pre-bake crusts like this so they start baking a bit before you add the filling. Line the pie with parchment paper and fill it with pie weights or beans. Bake the crust for about 15 minutes at 425 degrees F.

Don’t freak out if the crust falls a bit during this pre-bake. You can reshape it before you add the filling.

Okay. Let’s go back in time, actually. You should make the filling before you make the crust. It’s really easy though and you could even make it the night before you wanted to bake the pie.

Heat the honey in a small pot with the lavender over very low heat. Once the mixture is hot, turn off the heat and let it steep for about five minutes. Then strain out the lavender using a wire mesh strainer.

The whisk in the other ingredients. Let this mixture cool completely before making the pie. That’s why it’s a good idea to make it in advance!

Fill your pie crust with the pie filling. Not rocket science!

Bake this sucker for 30-35 minutes at 350 degrees F. At first it might not seem like the pie is going to set up, but it totally will.

Most importantly, when this sucker comes out of the oven, let it rest for 30 minutes so the custard can set up nicely before trying to cut into it. 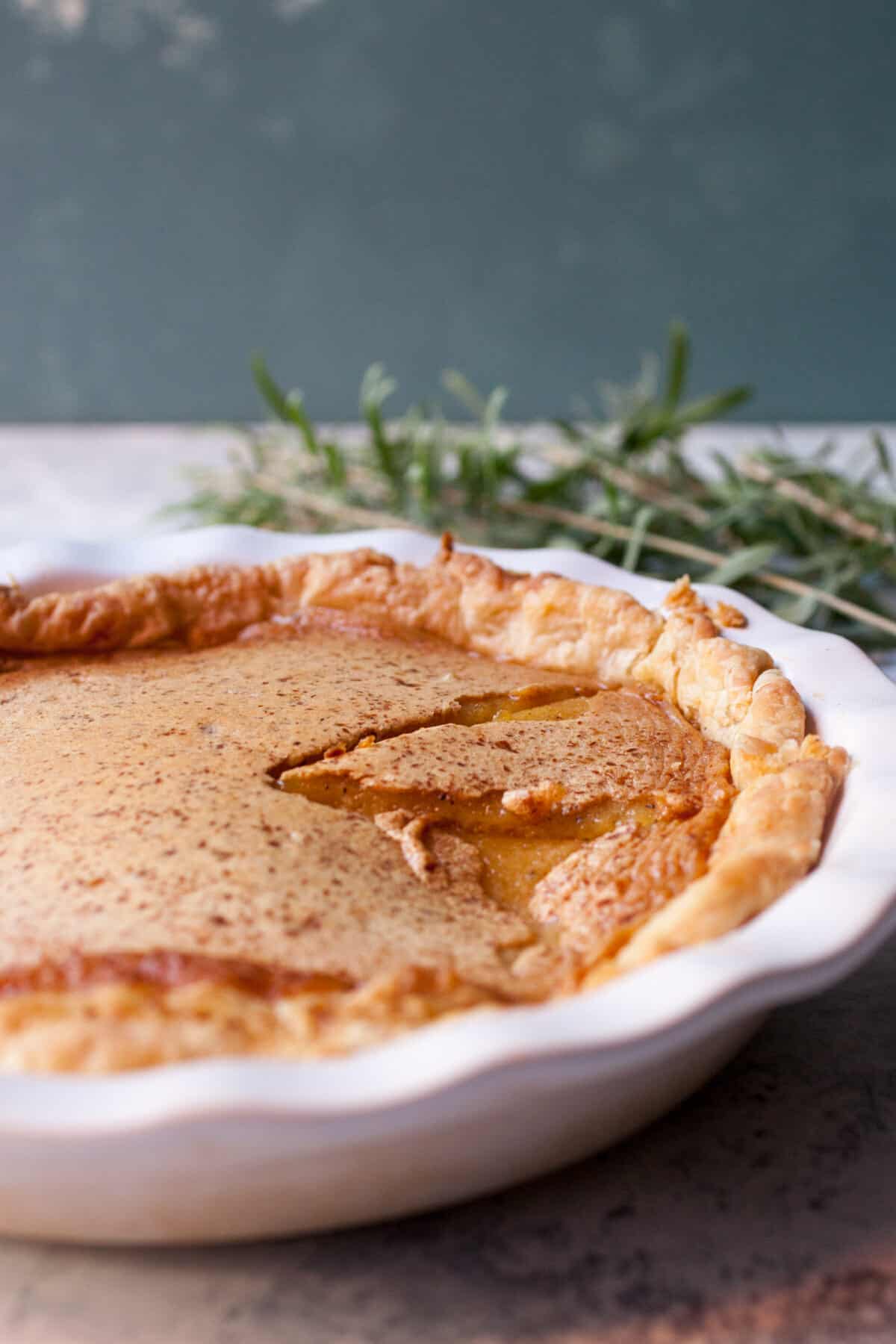