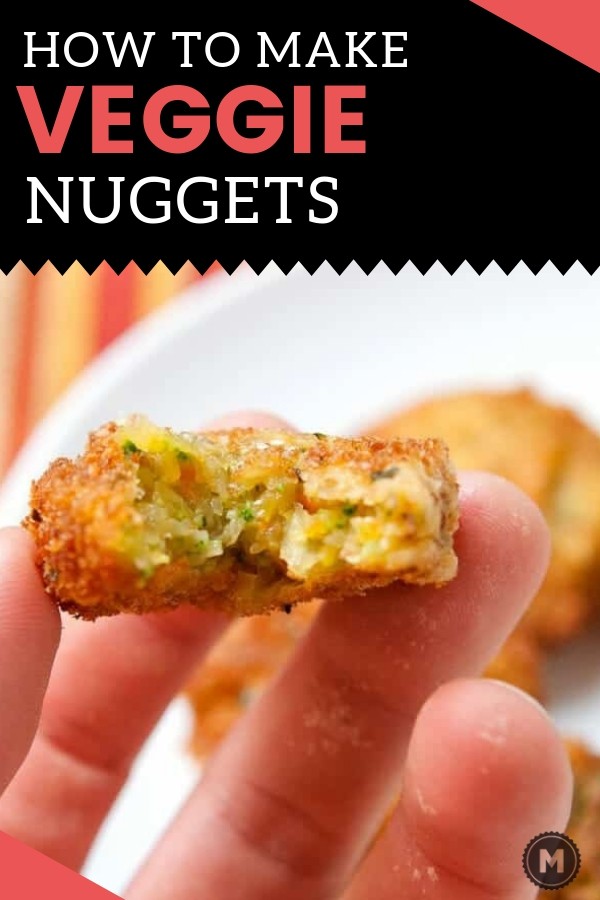 This Homemade Veggie Nugget video was updated on 12/4/2020 to include video and new descriptions.

I first made these Homemade Veggie Nuggets many years ago for a dinner party with another couple. The wife in the couple is a vegetarian and so while I wanted to make chicken nuggets for the crew, I had to figure out a vegetarian version as well!

This recipe was the result and it has since become a complete staple. I actually prefer to chicken nuggets a lot of the time because it’s packed with healthy veggies and is super colorful and flavorful.

Even the most adamant chicken nugget lover won’t be able to resist these deep-fried vegetable nuggets!

I had never made these before, but I figured the method could probably be similar to the chicken nuggets. I knew I wanted to start with lots of colorful, fresh vegetables.

I just roughly chopped up all these things.

For my chicken nuggets, I add in an egg and some flour as a binder for the nuggets, but for this veggie nuggets version, I added in a few potatoes which I thought would be enough binder to keep it all together.

Blanch these vegetables in salted, boiling water. They will need different times so don’t just toss them all in together. The broccoli will cook quickly, maybe 2-3 minutes, while the other vegetables will need closer to ten minutes.

The finished blanched vegetables should be fork-tender.

At this point, these homemade veggie nuggets are pretty easy IF you have a food processor.

If you don’t have a processor and want to try them out, your best bet is to mash the veggies together with a potato masher. Or you could try grating them on a box grater.

A food processor makes quick work of it though. Just pulse everything together including the Serrano pepper and salt and pepper.

This was my finished, very colorful mixture!

The mixture will stick together at this point, but it’s fragile. I wouldn’t recommend shaping the nuggets right away.

Instead, spread the mixture out on a baking sheet in an even thickness.

Stick the baking sheet in the freezer for 15-20 minutes. You don’t want it to be frozen solid, but you want it pretty cold and solid.

Then use a small cookie cutter to cut out your nuggets!

Once the nuggets are cut out, dip them in egg followed by Italian bread crumbs.

These were my finished little nuggets.

At this point you have two options:

Freeze them! Just place all the breaded nuggets on a clean baking sheet and let them freeze completely. Then transfer them to a freezer safe bag and they will store fine for months.

Fry them! If you want to cook them immediately though, just dunk them in a fryer with 350 degree F. oil. They will cook quickly and only need 3-4 minutes to get golden brown.

Can you bake these Veggie Nuggets?

You absolutely can bake these if you don’t have access to a fryer. After you bread them, lay them out on a baking sheet and drizzle with olive oil. They will probably need to bake at 350-400 degrees F. for 15-20 minutes to get nice and crispy.

Frying them is the way to go though if you can.

When they come out, don’t forget to season them with some salt right away.

Serve them with a sauce of your choice!

These homemade veggie nuggets are super-crispy on the outside and slightly sweet when you bite into them (probably because of the beet).

I have to say, these gave my normal chicken nuggets a run for their money.

Make a big batch of these, freeze them, and then skip the freezer fake nuggets for the next shopping trip! 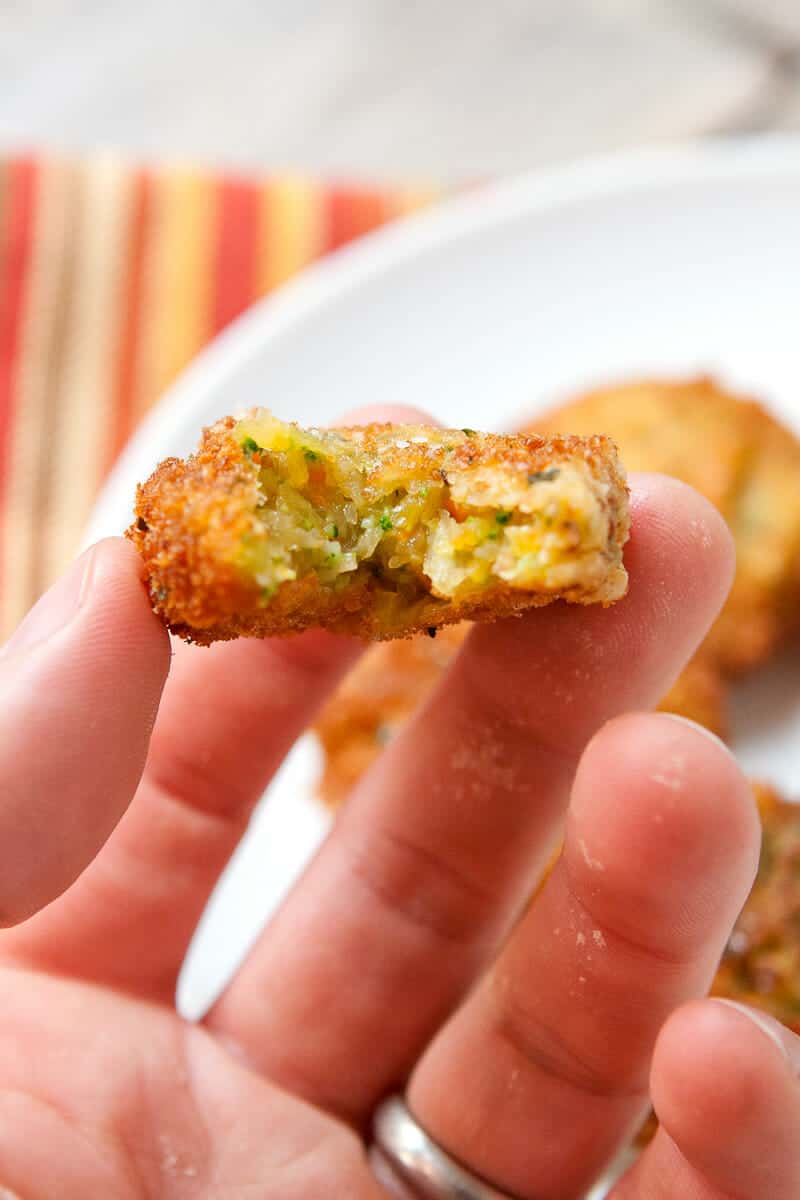 These vegetable nuggets are an awesome weekend cooking project and a great way to introduce tons of vegetables to your kids!

This is the best way to turn vegetables into tiny kid-friendly nuggets. Making homemade veggie nuggets isn’t hard and beats the store-bought versions!

1) Chop carrots, parsnip, new potatoes, golden beet, and broccoli into one-inch chunks. Bring a pot of salted water to a simmer and blanch all the veggies until tender. I recommend blanching the broccoli separately from the others. The sturdier veggies will take about 10 minutes to soften, while the broccoli will take 2-3 minutes.

2) Drain the veggies and add them to a food process along with the Serrano pepper, olive oil, salt and pepper. Pulse the mixture until it’s mostly smooth.

3) Transfer the pulsed veggie mixture to a baking sheet and spread it out into about a 1/2 inch thick layer. Transfer baking sheet to freezer and let freeze for 15-20 minutes until the mixture is hard, but not completely frozen.

4) Use a cookie cutter to cut shapes out of the cooled veggie mixture.

5) In two small bowls, whisk together the eggs in one and measure out the bread crumbs in a second one. After you cut out the shapes, dip them in the eggs and then in the breadcrumb mixture.

At this point you can either add the breaded nuggets to a baking sheet and freeze them and then transfer them to a freezer safe bag. They will keep great for months.

Or you can fry the nuggets immediately by heating oil to 350 degrees F. Once the oil is hot, fry the nuggets until they are golden brown, about 3-4 minutes. Then transfer the nuggets to a paper towel to drain.

Serve the nuggets while warm with ketchup and a sprinkle of salt.