Over the weekend, I cooked for a friend’s baby shower and the menu was a simple Tex-Mex buffet spread. As an appetizer, I made a boatload of guacamole and figured I could just set out a bunch of chips for the guac with various salsas and stuff.

I figured I would take the opportunity to do something I’ve had on the list for awhile: Run tortilla chips through The Homemade Trials.

Chips are surprisingly simple to make and I figured it might just make sense to do so especially if you need a lot of them.

1) If you’re using a cast iron skillet, pour in 2-3 cups of oil and heat over medium-high heat until the oil is 350 degrees F. (I recommend using a deep fry thermometer to ensure proper temperature).

3) When oil is hot, add a batch of corn tortilla wedges and fry for 2-3 minutes, flipping occasionally with tongs, until the chips are a light brown color. When they stop rapidly bubbling, it means they are done.

4) Remove chips to a plate or bowl with a paper towel to drain oil and season immediately with salt. The chips will continue to crisp up as they cool. Repeat frying with all tortillas. Add more oil if the level gets low.

You can store cooked chips at room temperature in an air tight bag or container for 5-7 days. Be sure to let them cool completely before storing them.

I didn’t put actual amounts on the recipe because it doesn’t really matter. Just make as many as you need. Actually, make double the amount you need because you’ll be sad when they are gone.

While you can cook the chips in a deep fryer (if you have one) I still use a plain old cast iron skillet for mine. You don’t actually need a ton of oil to make the chips. I usually start with three cups of oil and then cut my tortillas into 8ths and add them to the hot oil (350 degrees F. is perfect). They only need 2-3 minutes to cook through.

Flip them occasionally with a set of tongs as they fry and they are done when they have mostly stopped bubbling (water is mostly evaporated) and the chips are a light tan color.

As soon as they are done, transfer them to a bowl or plate with a few paper towels so they can drain and keep on going with another batch. Season the cooked chips with a sprinkle of salt when they come out of the fryer.

If the oil ever gets low in the pan, just add another cup or so.

I made 50 tortillas worth of chips (400 chips) or about 2.5 pounds of chips in about an hour so it can go pretty quick once you get the hang of it.

This is the easiest category to manage because obviously it takes some time to make them from scratch. No matter what, any store-bought brand will be faster than homemade.

This category might look close when you look at the breakdown but it’s really not. 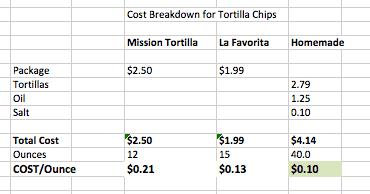 One quick note: I believe there is a bit of a scam going on in the chip world and I’m going to confirm this when I buy more chips. I poured my chips out of the bags they were in and they weighed less than it said on the packaging. In other words, I think the weight on the packaging includes the packaging which is kind of dumb.

So while the package of Mission chips I bought said 13 ounces on it, there was only 12 ounces of chips in the bag. Go figure.

Anyway, imagine you are hosting a huge party and need 40 ounces of chips (the amount I made for the baby shower). That would cost you only $4 if you made them yourself, but anywhere from $5.20 to $8.20 if you bought the chips depending on brand. That’s a pretty sizeable difference.

Cost goes to homemade chips for sure.

This was an extremely hard category to calculate, but I did my best. 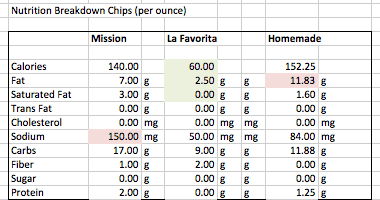 The reason it was hard to calculate had to do with oil usage. Essentially, I use five cups of oil during my cooking, but had 2 cups leftover in the pan at the end so you could say that three cups were used in the chips. The problem with this is that a good portion of the oil is actually soaked into the paper towels after the fry.

I think I underestimated the amount of oil that soaked into the towels (I guessed at 1/2 cup), but I think it was probably closer to a cup. Anyway, that makes my homemade version slightly higher in calories and fat than store-bought brands.

A second note: I double and triple checked the “La Favorita” chip nutrition info. Somehow their chips are literally half the calories and almost no fat for the same amount of chips. The only way I can figure this is possible is that they probably bake their chips or very lightly fry them.

So, at the end of the day, I’m calling this a tie. If you compare fried to fried, then it’s pretty close. If you baked your chips at home, they would be really close to the “La Favorita” nutrition info. You are essentially working with the same ingredients in any case so it makes sense that this is a draw.

This category was not close. Homemade chips are definitely better than store-bought chips. They are thicker and somehow crunchier and can hold up better to dips and cheese and anything you want to put on them.

If you look at the above picture, it becomes clear that manufactured chips don’t actually start with tortillas. Their chips are really thin and I would bet they make some kind of thin dough that they fry immediately to get the chips. Meanwhile, homemade chips are really thick and actually more filling than the store-bought kinds.

In a perfect world, I would only want to eat homemade chips. That’s all there is to it.

This one is hard because chips are just so easy to buy! Here’s what I would say:

If you’re going to buy chips, check out the nutritional info for them. I didn’t think the baked ones were noticeably worse than the fried ones. That’s a substitution I’m making from now on that I had never noticed until I looked at them closely.

Here are the two times that I’m definitely making my own chips:

1) If I’m cooking a really sturdy dish that needs a thick chip. Heavy nacho dishes, for example, would be a disaster on the thin, baked chip. You would have a huge soggy mess on your hands.

2) If I’m cooking for a special occasion or if I’m cooking a huge batch, I think it’s probably worth it to make them. That’s when you start to see some savings factor in and you end up with a better chip anyway.

What do you think? Do you ever make your own chips? If so, when do you take the time to do it?