Even though I frequently rant about how I don’t love pancake mixes (or any baking mix really), I realized recently that that was mostly just speculation.

I had never really tested out any particular pancake mixes in a taste test or tried to calculate their nutrition or cost compared to homemade versions.

This was a really fun homemade trials for me because, while the result made me happy, I also learned a lot in the process.

I’ve made a good amount of pancake variations over the years. While the cloud cakes are probably my favorite stand alone pancake variety, they are a bit of work.

Is it worth it to make pancakes at home or should you buy a mix? Here’s the breakdown!

1) Whisk together dry ingredients in a medium bowl. Add in egg, milk, buttermilk, and melted butter and whisk. Batter should be thick, but very pourable. Feel free to add a little more milk to adjust.

2) Use a 1/3 cup measuring cup to pour batter onto a pre-heated griddle or skillet over medium heat. Lightly oil/butter the skillet before cooking.

3) Cook pancakes until they start to bubble a bit on the surface, about 3-4 minutes. Then flip and cook for another 1-2 minutes.

Serve pancakes while warm with extra butter and maple syrup.

The batter is nice and thick, but it should be very pourable. If it’s too thick, feel free to add more liquid. It’s flexible.

Ok. So that’s the version I’m using for these trials. Let’s talk about…

I made sure to get a wide range of pancake options here. For starters, I got some frozen pancakes that are already cooked. Then I got a popular brand of mix and also a brand that’s sold in specialty stores.

As with all the homemade trials, I’ll be judging all of these in the categories of TIME, COST, NUTRITION, and TASTE.

Here’s the thing, I found that having a mix saved me zero time when making pancakes. Maybe like 10 seconds, but not enough to count. You still have to add liquid to the mix, mix the mix, and cook the pancakes.

When it comes to time, it’s totally a tie between mixes and homemade.

That said, obviously the frozen pre-cooked pancakes win the time category. You just toss those little guys in the microwave for a few seconds and BOOM. Breakfast. Sort of? 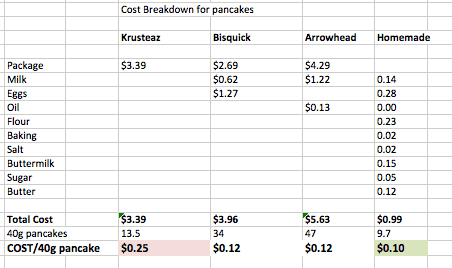 If we can all just take a look at the above chart, you’ll see one reason why you should never buy pre-cooked pancakes. They are SUPER expensive!

I found this funny because I typically think that the frozen items like this are marketed (and purchased) by people who don’t have a lot of money.

That’s exactly the opposite of what it should be. Rich people in yachts who do not like the flavor of actual pancakes are the only people who should be buying pre-cooked pancakes.

The COST category goes to the homemade version. I even used organic eggs and milk so you could’ve gotten the costs down more. Remember that any time you buy a mix, you are essentially paying for someone else to measure for you.

This was a really tough nutritional breakdown to calculate. It took me about an hour to do the math and I’m fairly positive that there are some mistakes.

That’s okay though. At the end of the day, it’s pancakes. They aren’t exactly known for being healthy.

A few notes though:

I think the NUTRITION category is a pretty close tie between homemade and Arrowhead. But all of these small differences get immediately wiped out when you add butter and syrup to the equation so it seemed almost silly to calculate these.

First, just look at this. I should not be able to hold a pancake in my hand like a damn hockey puck.

I had never actually seen these frozen pancakes before. While they sort of look like pancakes, I assure you that’s where it stops.

They have the texture of a sponge and almost no flavor. They are counting on you to flood them with syrup so you won’t notice.

To do my taste test here, I made all the pancakes (at the same time on the same griddle) and then tasted them without any butter or syrup.

I’m not sure I’ve ever actually tried a pancake without those things. It was interesting.

The frozen ones were not even in the game.

Out of the two mixes, I thought the Arrowhead one tasted best. It had a nice, nutty flavor to it that all the other pancakes lacked (including homemade).

But it was very apparent what the homemade pancake was. It tasted like butter and milk and freshness. In comparison some of the others tasted a bit chemical-like.

I’ve eaten a lot of mix pancakes in my life and I’ve never noticed it before tasting it side-by-side with a homemade version, but the difference is noticeable.

TASTE goes to homemade. Not even close.

I was actually pretty shocked that my homemade version stayed close in the cost and nutrition categories. Typically when I use real butter and eggs in dishes, it’s noticeable in those breakdowns, but it wasn’t really in this case.

This might be the most lop-sided homemade trials ever.

The only reason I can see buying a mix is if you are traveling or something and don’t want to lug extra ingredients around. Otherwise, it’s almost no extra work to do it right and the taste is just plain better.