A few weeks ago I went to a surprise party for a good friend of mine. The theme of the party was sushi and I thought I’d bring an appetizer. I’ve been wanting to try my hand at potstickers or dumplings for awhile now so this was as good a time as any. While I like the steamed variety, potstickers are actually my favorite. A good potsticker is crunchy and browned on the bottom and then steamed on the top so that the filling is cooked through.

These Homemade Potstickers were actually easier to make then I thought. And they were very tasty.

I really stressed about this recipe. I was worried about the filling and the technique. But the reality of it is that if you just get a few things right, they are going to be delicious. So if you want to make them, try not to get too worried about that stuff. Most likely, they will be very edible and, if you’re feeding friends, they’ll be impressed.

Homemade potstickers with a pork, shrimp filling. Once you get the method down for shaping these, you can make as many as you can eat, which is a lot.

I kind of fused two recipes together for these. One from Rasa Malaysia and one from Steamy Kitchen.

Dipping sauce: (You can buy very good dumpling dipping sauce in some supermarkets, but below is a recipe if you want to make it yourself)

1) Chop up all meats and veggies and add them to a large bowl.

2) If it is too runny or thin, add 1 Tablespoon of cornstarch to thicken it a bit.

4) Using a large pan with a tight-fitting lid, coat the bottom of the pan with a few Tablespoons of neutral oil (ie canola).

5) Once the oil is glistening hot, place the dumplings in the pan, seam-side up. Make sure that none of the dumplings are touching or they will fuse together.

7) After a few minutes of frying, steam the potstickers (first pour off pools of oil from pan), turn the heat down to low, slowly pour about 1/4 Cup of water in pan and very quickly put the lid on the pan.

8) After a few minutes of steaming, take the lid off and the potstickers are ready.

9) Cut into one before serving to make sure it’s cooked all the way through.

There are a ton of  filling variations for Homemade Potstickers. Some have cabbage added, some are thickened with a corn starch mixture. I decided to pass on both of those and just keep it simple. Almost all recipes I saw though used both pork and shrimp. It definitely makes the filling really flavorful. 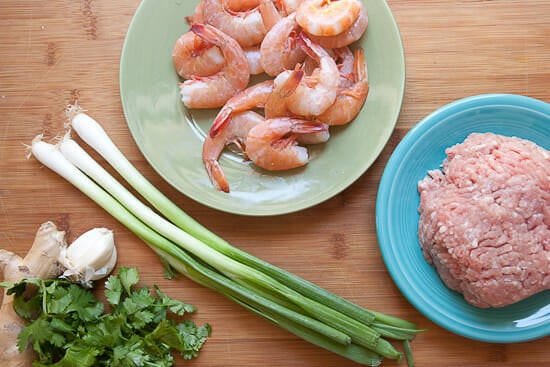 Also, you’ll need some veggies. I chose to only use the veggies that would give a ton of flavor to the filling: Scallions, cilantro, and ginger. Take some time to make sure that each one is minced really well (or grated for the ginger). Otherwise, you might end up with a huge piece of something in a dumpling.

Also, I used these sauces and oils to give some good moisture and extra flavor and saltiness to the filling. It’s the same basic stuff you would use for a dipping sauce, so the flavors meld nicely.

Chop up all your meats and veggies and add them to a large bowl. Pretty straightforward stuff. 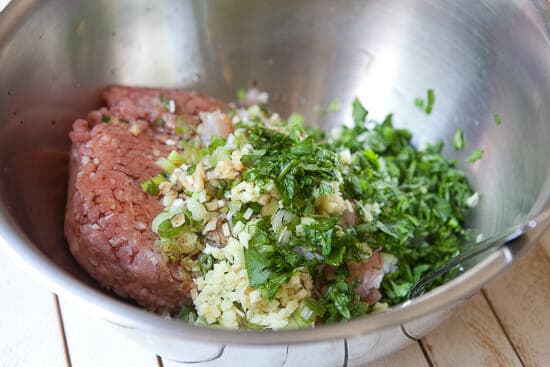 All mixed up it doesn’t look very pretty, but it makes a perfect filling. If it’s too runny or thin, add 1 Tablespoon of corn starch to thicken it a bit. In my completely amateur assessment, mine was fine without it.

Ok. So it was impossible for me to photo these while I made them. But I found some success with the below setup. The red bowl is just a bowl of water I used to lightly wet the outside of the dumpling wrapper which makes sure it seals nicely. 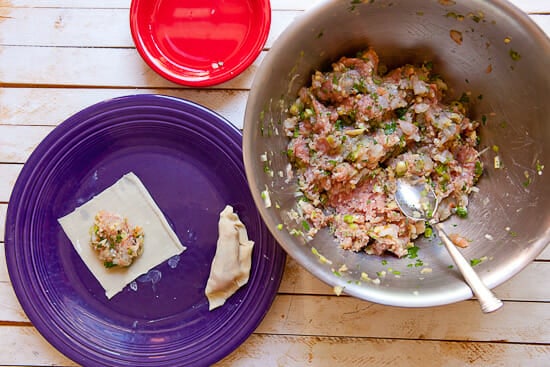 I would try to buy the thickest dumpling wrappers you can find. Also, the round ones actually work better than the square ones but either are fine.

I only had one variety available and they worked fine but I would’ve liked something a bit thicker. My dumplings were not perfectly shaped so I don’t want to sound like an expert on that part of the deal. Steamy Kitchen has some excellent photos that definitely helped me out. 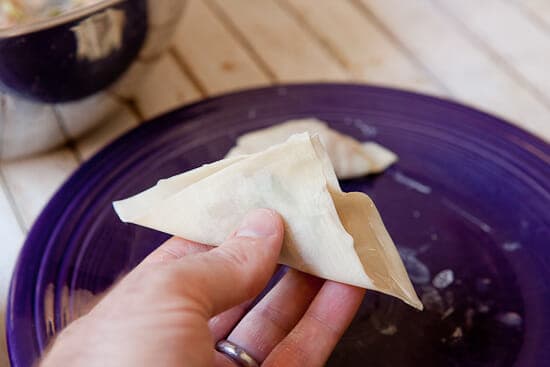 Also, this video from YumSugar was probably the most helpful. It shows the basic technique that I went with. This is definitely one of those things that is kind of hard when you start but after a few you get a lot quicker at it and by the end my dumplings were even looking pretty even. 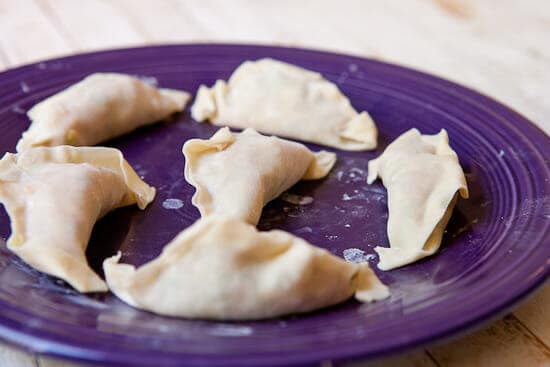 Once you have all these shaped, the hardest part is done in my opinion. To cook these guys all you need is a large pan with a tight-fitting lid. Coat the bottom of the pan with a few Tablespoons of neutral oil (I used canola). Once the oil is glistening hot, place the dumplings in the pan, seam-side up. Make sure that none of the dumplings are touching or they will fuse together. 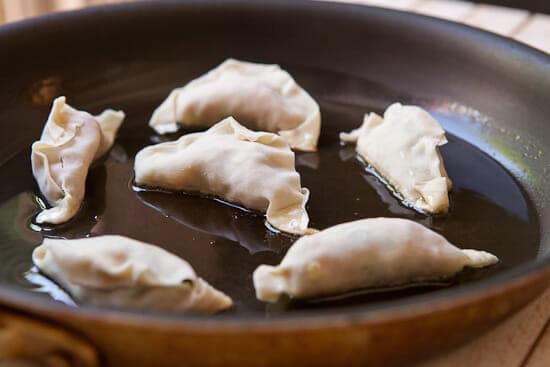 Let these fry on medium-high heat for about 3 minutes until the bottoms of the Homemade Potstickers start turning a nice brown. My potstickers didn’t actually stick to my pot, which I consider a plus!

After a few minutes, you need to steam these dumplings to finish them off. Right now only the bottom half of the dumpling would be cooked if you cut into it. Steaming them makes them light and fluffy on top and keeps the crust crispy on the bottom. It’s not for the faint of heart though, because you have to basically add water to a pan with very hot oil in it. So be careful!

If you have pools of oil in your pan, pour some off before you add your water.

Get all the little kids out of the kitchen in case there are splatters and then turn the heat down to low. Slowly pour about 1/4 Cup of water in your pan and very quickly put the lid on the pan.

Note the timing! Slowly pour in the water and quickly add the lid. If you were to just DUMP in the water it will splatter even worse! Don’t be tortoise slow about it, but be controlled with it! 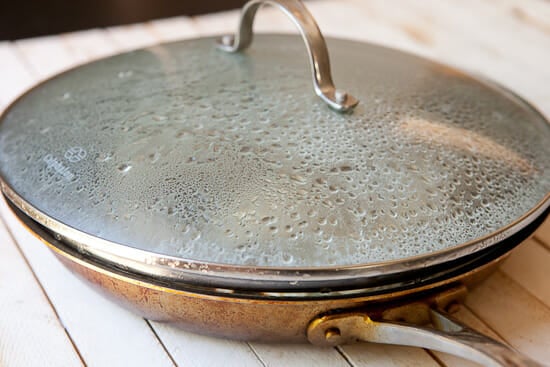 Once the lid is on it will sizzle. It will steam. Guests will be concerned/impressed. Eventually though the water will evaporate and the pan will calm down.

After a few minutes of steaming, you can take the lid off and you should have some very delicious dumplings. Be sure to cut into one before serving to make sure it’s cooked all the way through. 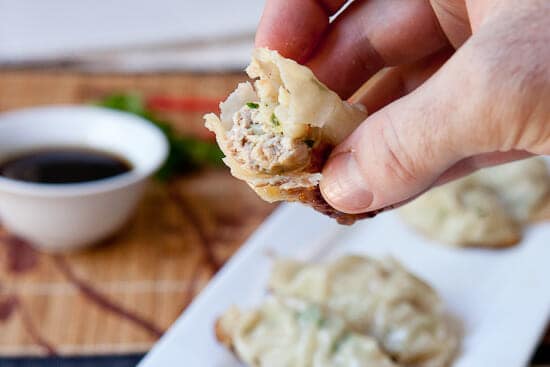 Note that my folds on the potstickers aren’t perfect. That’s fine. As long as they are sealed so the filling can’t escape, they will be good. 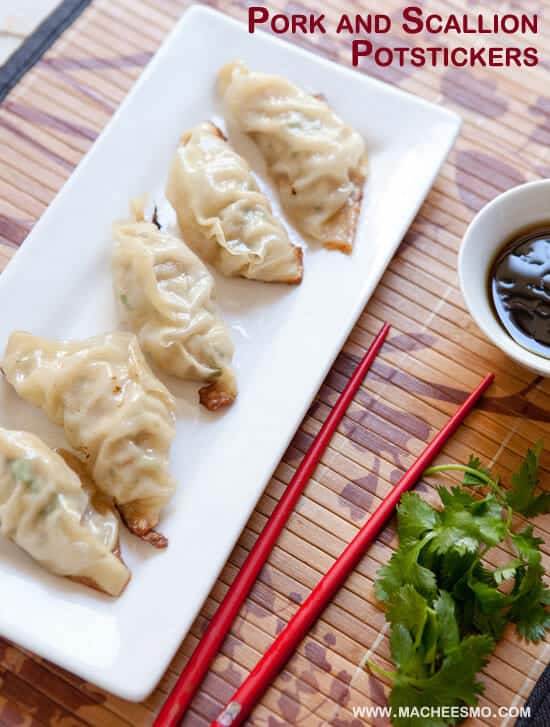 Just remember. If they aren’t perfectly folded, just call them rustic. Either way, once your guests eat one of these Homemade Potstickers, they will immediately forget how it looked because these guys taste so very delicious!