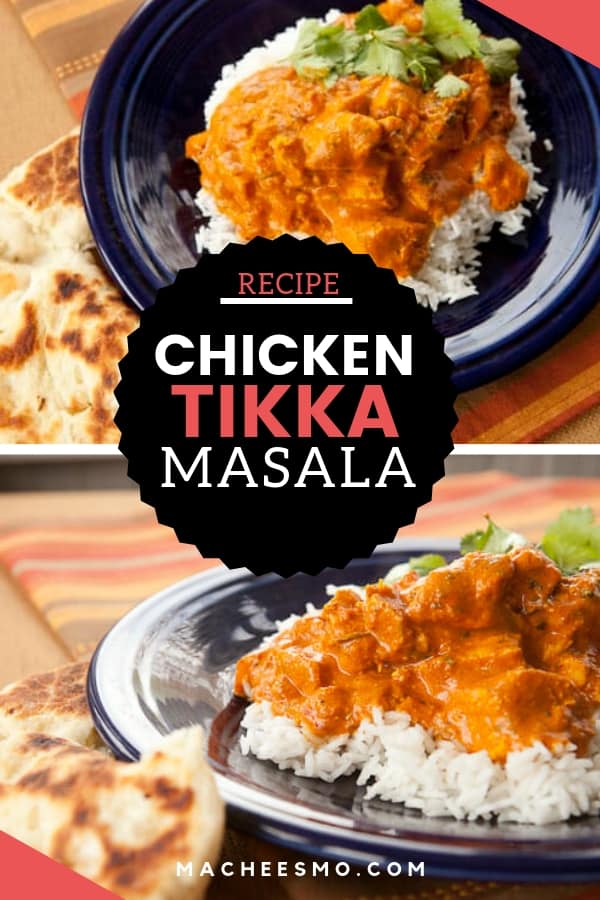 This Authentic Chicken Tikka Masala recipe reminds me what I love about cooking. It’s pretty much the definition of a slow meal. There are shortcut versions of this recipe on the internet, but all the shortcuts come with a price! This authentic version will take you some time to make, but most of the time is idle time and nothing about it is particularly hard or stressful.

Some people might see the total time for this chicken tikka masala recipe as a deal-breaker, but sometimes it can be a benefit. There’s something great about starting dinner right after lunch and having your house smell amazing for the entire afternoon. It’s the kind of smell that will make a visitor want to stay for dinner. It will make you very  very  hungry.

I sort of fell in love with this Chicken Tikka Masala recipe as I made it and so I even went an extra step and made some homemade naan bread for it. That’s sort of unnecessary but if you’re feeling ambitious it’s a fun project.

Served without the na’an and with rice, this recipe is a super-flavorful gluten-free recipe as well!

This chicken tikka masala recipe is made from scratch and with love. It takes some time, but is very much worth it!

FOr the naan:
1) Heat milk until it’s about body temperature (100 degrees F.) Transfer to small bowl and whisk in yeast and sugar. Let sit for a few minutes until it starts to foam.
2) Stir together flour and salt. Then mix in minced onions, yogurt, and melted butter.
3) Stir in warm milk and mix until combined. Dough should be slightly sticky. If it is very sticky, add more flour by the tablespoon or if it is dry, add milk by the tablespoon.
4) Once dough is pulled together, knead it for a few minutes in the bowl, then transfer to a clean lightly-oiled bowl, cover, and let rise for 2 hours.
5) Punch dough down and divide it into 9-10 dough balls. Use floured hands to work with the dough. Let dough balls rest for 10 minutes.
6) Heat a heavy skillet on medium-high heat. Once hot, brush with oil or ghee. WOrking with one dough ball at a time, stretch it out and lay it in the pan. It’s okay to have some thicker parts and if it is slightly misshaped. Let naan cook for 2 minutes per side until it’s lightly charred. You should be able to cook two at once in a 12 inch skillet.
7) You can keep the naan warm in a 250 degree oven until serving or they are also okay at room temperature.

For the Chicken Tikka Masala:
1) Mix together garlic, ginger, turmeric, garam masala, coriander, and cumin. Divide mixture in half. Add half to a bowl with yogurt and salt and add in chicken. Marinate for at least 3 hours in the fridge.
2) When ready to make the sauce, add ghee or veggie oil to a large heavy pot over medium heat. Add onion, tomato paste, smashed cardamom and smashed chile peppers. Cook for five minutes until onion is soft and paste is darkened.
3) Add remaining half of original spice mixture along with tomatoes and juices. Bring to a simmer and scrape up any bits stuck to pan. Simmer for a few minutes.
4) Add in cream and cilantro (stems are okay). Simmer on low until sauce thickens, about 30 minutes.
5) Preheat broiler in your oven and line a baking sheet with foil. Lay out marinated chicken on a few wire racks. Broil chicken until nicely charred for about 10 minutes per side.
6) Let chicken cool. Then dice into bite-sized pieces and add to sauce.
7) Simmer chicken in sauce for 20 minutes until chicken is cooked through. SErve chicken over rice with cilantro and onion naan (optional).

That’s a long list of ingredients, no doubt, and might make it a very ambitious project for a new cook.  It definitely highlights the benefits of a good pantry though. The only things I had to buy to make this recipe was chicken, some tomato sauce, onions, some butter, ginger, and some cream.

The really long part about making this tikka masala from scratch is the marinade. The chicken just needs to sit in the marinade for at least three hours. You could go longer even, but I did three hours with good results.

Of course, you could do this part the night before and drastically cut down your prep time!

Stir together the ground spices (garam masala, turmeric, coriander, and cumin) with the ginger and garlic. You’ll use half of this very amazing spice mixture for the chicken and half for the sauce later.

Just mix the spice mixture with some yogurt and salt and then add all  your chicken to the marinade. Cover this and let it sit in the fridge for a few hours (or overnight).

How to Cook the Chicken Tikka Masala

Skipping ahead, when you’re ready to cook the chicken, line a baking sheet with aluminum foil and lay out the chicken on a wire rack.  Preheat your broiler to HIGH heat. Broil the chicken for about 10 minutes per side.

This won’t really cook the chicken all the way through, but it will give it some awesome char on each side.

While your chicken is charring, you can work on the sauce!

This sauce takes some time also to cook down and develop good flavors. You should start it at least an hour before you plan to eat.

Indian food uses clarified butter a lot (called ghee) and so I recommend making a small batch of it for cooking. You can also use vegetable oil though if you want (a shortcut!). If you need help making clarified butter, you can check out Clarified Butter Tutorial on it. I didn’t even strain it for this recipe. I just melted down some butter over low heat and then let the  solids settle to the bottom and scooped off the top as needed.

Add that mixture, plus some ghee (or oil) to a large heavy pot over medium heat. Add the onions and tomato paste as well and cook it until the onion is soft, about five minutes. It’s okay if there is some bits stuck to the pan. 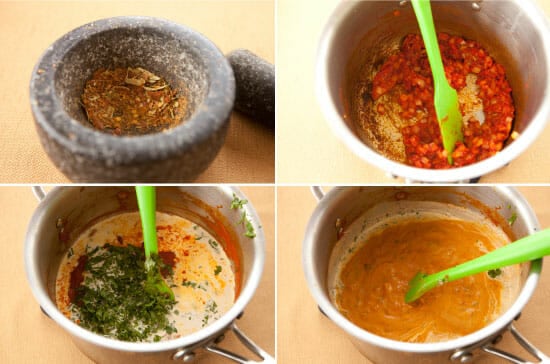 Then add the tomato sauce (or diced tomatoes) to the pan and use the juice to scrape up any bits stuck to the pan. Let that simmer for a few minutes and then add in the cream and cilantro. Stir that together and let it simmer for 30 minutes or so over LOW heat.

Then you can stir in all the chopped chicken that you charred earlier. Let this all cook together for 20 minutes or so to finish cooking the chicken and combine flavors.

As a bonus, I made some onion naan for dinner also. It’s a pretty easy dough to pull together honestly. Just mix together a small pinch of sugar, the yeast, and warm milk until it foams (a few minutes).

Then stir together the flour, salt, yogurt, butter, and onions. It will look like a lot of onions in the dough, but that’s good.  Then add in your milk mixture and stir until it comes together in a dough.

Knead the dough a few times and then transfer it to a clean lightly-oiled bowl. Let this rise for 2 hours.

Then punch it down and use lightly floured hands to divide the dough into 9-10 small balls. The dough will be pretty sticky so use lots of flour.

Cook the naan in a hot cast iron skillet over medium-high heat. Brush the pan with some ghee or vegetable oil before adding the dough. I just stretched the dough out with my hands before tossing it in the pan. Nothing fancy!

The naan will need to cook for about 2 minutes per side and should char lightly from the heat.

You can keep the naan warm in a 250 degree F. oven or just serve it immediately.

Serve the chicken over rice and garnish with cilantro. Serve the naan on the side!

This Chicken Tikka Masala is one of those authentic meals that looks some simple: some sort of red sauce with chicken over rice, but the flavors are deep and really complex.

It’s a really amazing dinner and worth every minute of work. 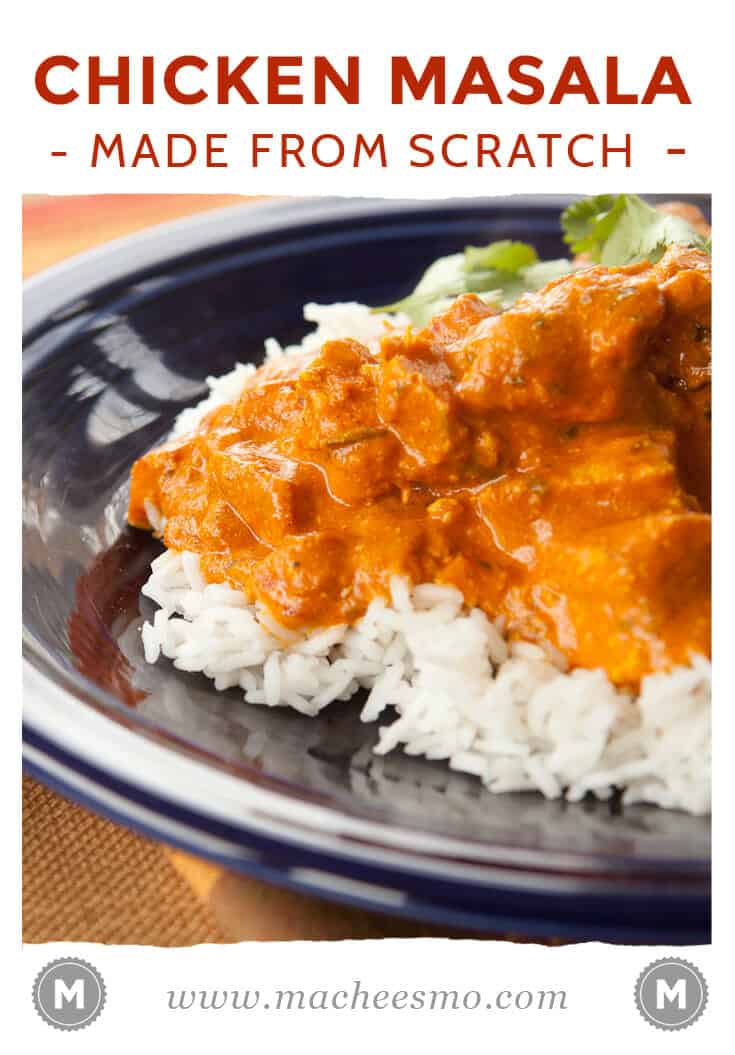 Here are a few other great Indian recipes: