I frequently get asked if I would ever open a restaurant. The answer has always (and will always be) no. I have no desire to do such craziness. If I did though, it would almost certainly be a breakfast joint of some sort. Breakfast is just my favorite thing to cook and many of my most successful recipes are breakfast recipes. Plus, I could put these Hash Brown Egg Nests on the menu and make literally dozens of dollars.

These are a slightly more advanced riff on the classic Egg in a hole which is cooked in toast. I guess I like that version fine, but toast is, well, a bit boring. Hash browns are better in pretty much every case, correct? Plus, they are easy to shape!

Seems like the solution is to make them with a hole in the middle and then fill ’em up with perfectly cooked over-easy eggs!

What can go wrong? Some things, but not much, honestly. It’ll be great. Just try it!

Who needs toast?! You can make these Hash Brown Egg Nests! This is your new favorite breakfast!

What Potatoes to Use for Hash Brown Egg Nests

First, let’s chat hash browns. You can buy prepared hash browns that have been rinsed and are ready to cook, but it’s not terrible to do on your own. Some people make the mistake of just grating potatoes and tossing them in a skillet. This will make food. But it won’t make excellent food.

To make excellent hash browns, peel the potatoes and grate them but then rinse them really well in cold water. This will rinse off the starch on the potatoes which will make sure the potatoes don’t stick together in a big lump.

Most annoyingly, after you rinse them you need to dry them really well. I just use paper towels to get off as much liquid as possible from the surface of the potatoes.

Then add a drizzle of oil and the seasonings.

These go on a hot griddle (or big skillet) for 4-5 minutes until they start to get crispy. Then you can start stirring them to cook evenly. Try not to mess with them too much though.

After 8-10 minutes of cooking, make a few mounds with your hash browns.

Assuming you have metal molds, you can make the wells in the hash browns right the griddle. If you are like me and have plastic ones, then don’t put the plastic on a hot griddle. Hopefully, this is obvious.

So I had to pull my hash browns off, shape them around the molds, and then gently slide them back on the griddle. It was a few extra minutes of work, but not terrible.

When you’re shaping the hash browns, be sure to really pack the potatoes around the mold. You want a nice sturdy wall so the eggs can’t escape.

Once you have some nice wells in your hash browns, in goes the eggs!

Let them cook on the first side for 90 seconds or so until the eggs are mostly set. Then very gently flip them. Ideally they will stay together as a single thing.

Hopefully, your hash browns are crispy and wonderful and the eggs are just cooked.

Plate up these hash brown egg nests with some fresh scallions and salt and pepper. Could you serve them with ketchup? I suppose. I’d go for hot sauce first though. 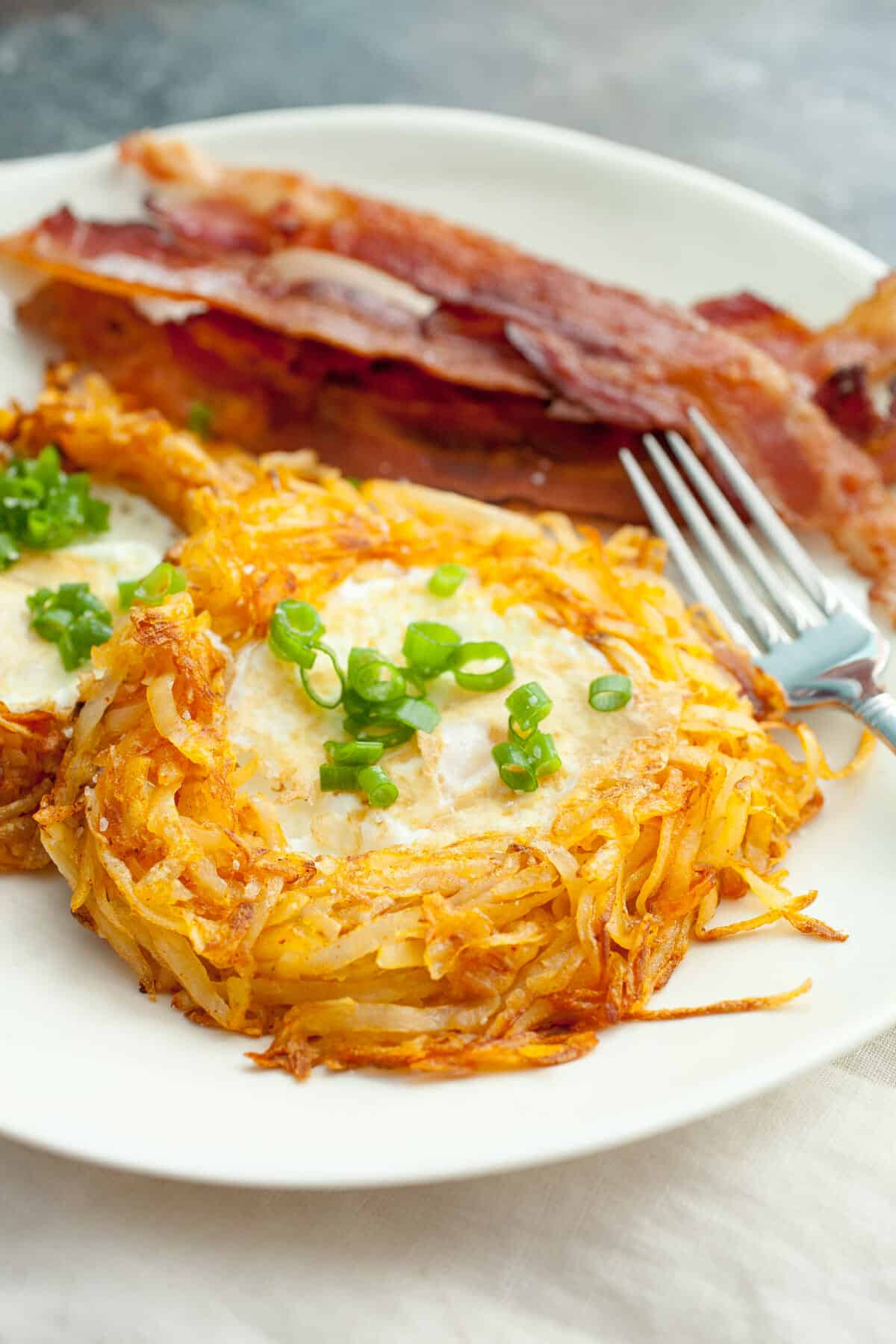 These are really fun to eat and weren’t as difficult to make as I thought they’d be.

Save the toast for the jam, people. Make Hash Brown Egg Nests!!! 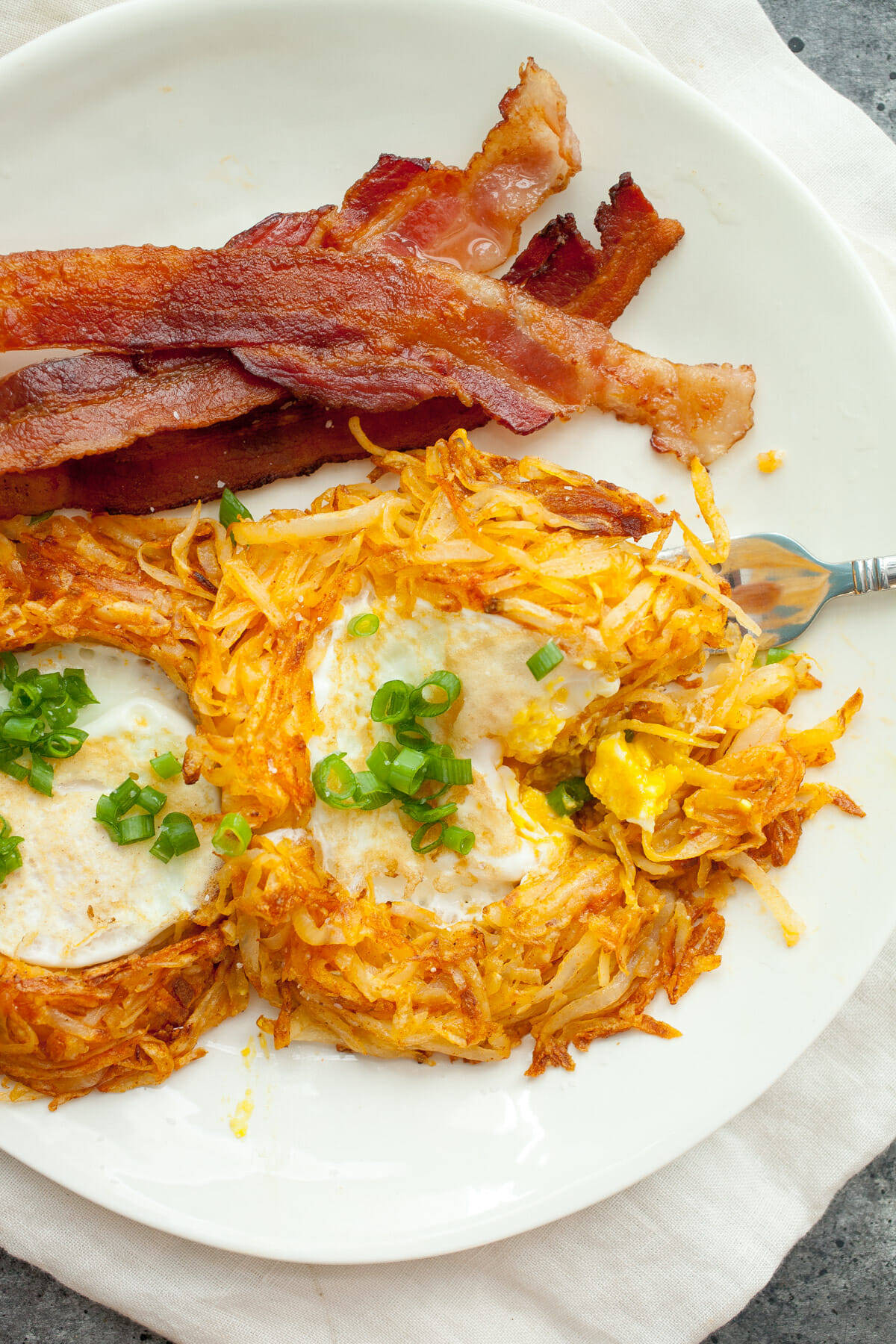