This is a sponsored post written by me on behalf of Simply Potatoes. All opinions are 100% mine.

Eggs benedict dishes are one of my absolute favorite to make for brunch and I’m always happy to share a variation on the classic with English Muffins. This is an update on an old post I made where I use hash browns for the base!

The key to this working is to make sure the hash browns get nice and crisp so they can hold up to the egg and sauce mixture! For my version, I used Simply Potatoes hash browns. Their products can be found in most refrigerated dairy sections and are easy to prepare (no peeling/shredding). Most importantly, they are made with real ingredients and not frozen!

Of course, if you wanted to make your own from scratch, check out my Southwestern hash browns, which would be an awesome base for these benedicts.

English muffins, you are on alert. Hash browns might just be the new benedict kings!

A hash brown benedict is a great change from the classic with an English muffin. It’s a great breakfast with potatoes, meat, and eggs!

1) Prepare potatoes according to package by cooking in a nonstick skillet over medium heat with a drizzle of oil. Brown the hash browns well on one side, then press into rounds and continue to cook until the rounds are crispy on both sides, about 6-7 minutes per side. Keep potato rounds warm until ready to serve.

3) Whisk until egg mixture is frothy and hot. It should at least double in volume and be slightly steaming.

4) Slowly whisk in melted butter until it forms a smooth sauce. If the sauce gets to thick, add a bit more water and whisk.

5) Poach eggs in lightly simmering water with added vinegar. Cook them for about 2 1/2 minutes. Drain eggs with a slotted spoon and pat dry on a paper towel.

6) Plate hash browns topped with seared Canadian bacon or ham while eggs cook. Then immediately top with eggs and sauce and serve right away garnished with scallions!

Mushy hash browns are nobody’s friend and it’s important to knock them out of the park on the crispiness for these benedicts to work.

Whether you are using Simply Potatoes hash browns or making your own, make sure to add them to a large skillet with a good amount of oil over medium heat. Season the potatoes with salt and pepper and try not to move them around too much while they cook. Just let them sit for 5-6 minutes to get some nice color on one side.

As the potatoes start to brown, you can portion them into little rounds. If you have a set of biscuit cutters, you can use those to portion out your rounds or you can just use a spatula to get them close. Do pack them down a bit though so the potatoes compress slightly and form patties of hash browns.

You want a nice solid surface for your benedict toppings!

Don’t rush these as they cook. Just let them get nice and browned on both sides. They will probably need 10 minutes per side to get to the right doneness.

Once they are crispy enough, you can keep them warm in the pan over low heat or transfer them to a 250 degree F. oven while you make the rest of the dish.

In my opinion, there are three tricky parts to making a good benedict: timing, eggs, and sauce. We’ll get to the first two in a second, but let’s handle the sauce first since I think that’s the trickiest of the three.

Hollandaise sauce is a lot like homemade mayo, except instead of oil, we’ll use melted butter. It’s also a warm sauce which makes it a bit easier to mix actually, but you run the risk of over-cooking the yolks which isn’t good.

There are lots of ways to make this sauce and I’m sure there’s an official cooking school way that I don’t know. What I do know is that my way works… so whatever.

Start with two egg yolks in a bowl. To this bowl add all your other ingredients except the melted butter.

Whisk everything together and then put the bowl over a pan with simmering water. You want to be sure that the bottom of the bowl isn’t touching the water. You just want it to steam.

Whisk the bowl pretty continuously as the yolk mixture starts to heat up. It’ll be a bit runny at this point, but that’s fine. Keep whisking for a minute or two and eventually your mixture will at least double in size and turn really frothy. This should also be hot to the touch at this point and very lightly steaming.

I go back and forth on whether or not you need to clarify your butter for hollandaise sauce. To be honest, I rarely do it and my sauce usually comes out fine.

But technically, even though it’s kind of a pain, if you want to make a really good sauce, you need to clarify your butter before mixing it in with the sauce. I did an entire post on how to clarify butter a long time ago, so just check that out.

For this version though, I just used melted butter but tried to let most of the solids settle to the bottom of the melted butter.

Once your egg mixture is frothy and hot, start slowly whisking in the butter. Start slowly and whisk furiously!

As your butter incorporates, the sauce should get really nice and thick.

It’ll be a delicious thing.

You wouldn’t want to make hollandaise sauce way before you serve the meal, but it will keep fine for 15-20 minutes. If it cools down, just put it back over the heat and add a few drops of water. It should loosen up and return to a nice hot sauce without a problem.

At some point, you need to sear your ham (or Canadian bacon or just bacon) in a skillet. I like to get mine nice and crispy!

I haven’t talked about poaching eggs yet because you should save them until the end! Using this method, I can poach four eggs at a time and have about a 95% success rate with the eggs. (You’re bound to lose one occasionally though so have extras ready.)

Get a wide pot of water simmering and add about 1/4 cup of plain white vinegar to the water. The acid in the vinegar will make the eggs stick together really nicely.

Give the water a stir with a slotted spoon to create a small whirlpool. Crack the egg in a bowl. Don’t crack it straight into the water. Gently pour the egg into the simmering water from the bowl. Do as many as you feel comfortable with. I used to do two at a time, but when I was on food fighters I did five at a time in two different pots!

Set a timer for two minutes. Once time is up, start checking the eggs. Use a slotted spoon to carefully scoop one out and gently poke it. It should feel firm in the white sections and liquid in the yolk. As the eggs finish, move them to a plate with a paper towel to drain slightly.

More than any one ingredient, the timing of eggs benedict can throw some people off. This is the general schedule I used for these:

1) Cook hash browns (and keep warm)
2) Put large pot of water on to boil for eggs later
3) Sear ham and keep warm
4) Make Hollandaise sauce
5) Poach eggs
6) While eggs poach, lay out each plate and make sure your sauce is hot.
7) Plate and serve right away!

Doing this schedule means that the things that are most time sensitive (the eggs and the sauce) are the very last to be prepared.

If you wait more than about five minutes between when the eggs are done and you eat the darn thing, the eggs will be cold and the sauce won’t be great.

But it’s not hard once you get the hang of it.

Top each hash brown and ham stack with one egg and a good drizzle of sauce.

To be honest, I’m not sure I would recommend the hash brown method if this is your first benedict ever. Stick with the english muffin just because it removes an element of cooking.

But if you’re feeling ambitious or an eggs benedict expert, this was a freakin’ awesome variation. The potatoes do a great job of sopping up all that delicious sauce and egg mixture. Obviously, if the ham is too heavy for you, you could use something lighter like tomatoes, spinach, or mushrooms!

But yea.. if you’re a brunch lover, it doesn’t get much better than this! 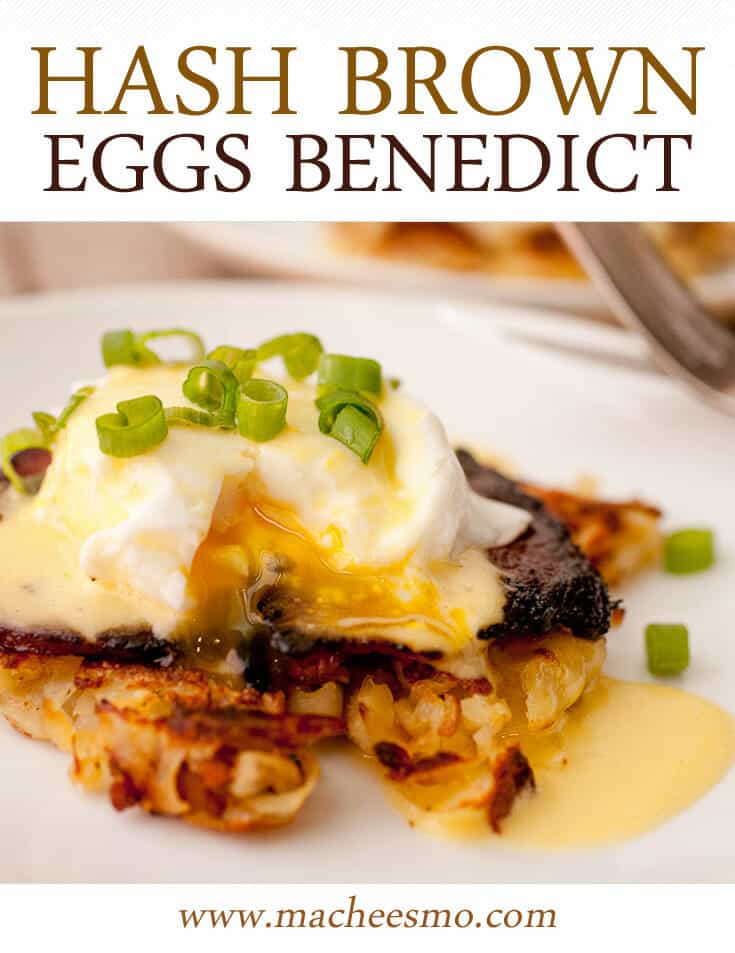 Simply Potatoes is offering to give away a free month of Simply Potatoes products to a Macheesmo reader. To be entered, just leave a comment on this post! I’ll pick a winner at random a week from today (04/04/15).