During these upcoming summer months, I love making simple grilled pizzas like these because they keep the oven off and I also think you can get a really nice crispy crust using the grill. Using Flatout’s Thin Crust Artisan pizzas, this recipe becomes ridiculously easy. You could easily make these grilled pizzas on a busy weekday even!

There are only a few tricks to make these grilled pizzas really shine. For starters, you need to be sure to grill the veggies before adding them to the pizzas. The pizzas cook so fast that the veggies would be raw if you just tossed them on. Second, you might be inclined to really pile on the toppings, but trust me when I say more is less! The toppings in the recipe should make six small thin crust pizzas. If you overload them they will lose their crispiness!

Who knows… maybe these little beauties can even find their way to your grill this Memorial Day weekend!

This easy grilled pizza has a super-crispy crust and fresh ratatouille toppings (which are also grilled). Perfect for a summer cookout!

Like I mentioned in the intro, you have to grill these veggies before you toss them on the pizza. For the initial grilling, keep them in big pieces. I just sliced everything in half longwise. For the eggplant, I also sliced off some of the thick peel so both sides were flat.

Drizzle the veggies with olive oil and season them well with salt and pepper. Then toss them on a hot grill for 3-5 minutes per side until they have nice grill marks and are tender. Ideally, they would still have a little crunch to them. The eggplant will need a bit more time than the zucchini and squash.

Spread some pizza sauce over your thin crust pizzas and add mozzarella. Then sort of shingle the sliced, grilled veggies on top. Top with Parmesan and dried oregano. Sprinkle with salt and pepper also!

My only tip here is to go relatively light on the cheese and toppings. You don’t want to weigh down the crust too much!

Toss these bad boys back on a hot grill for 5-6 minutes (covered). The crust will get really nice and crispy and the toppings should get bubbly and delicious.

This is the grilled crust that dreams are made of!

The flavors in this grilled ratatouille pizza are really classic but I like the pizza spin on it. Easy to eat while walking around also so these would be great for a casual party. 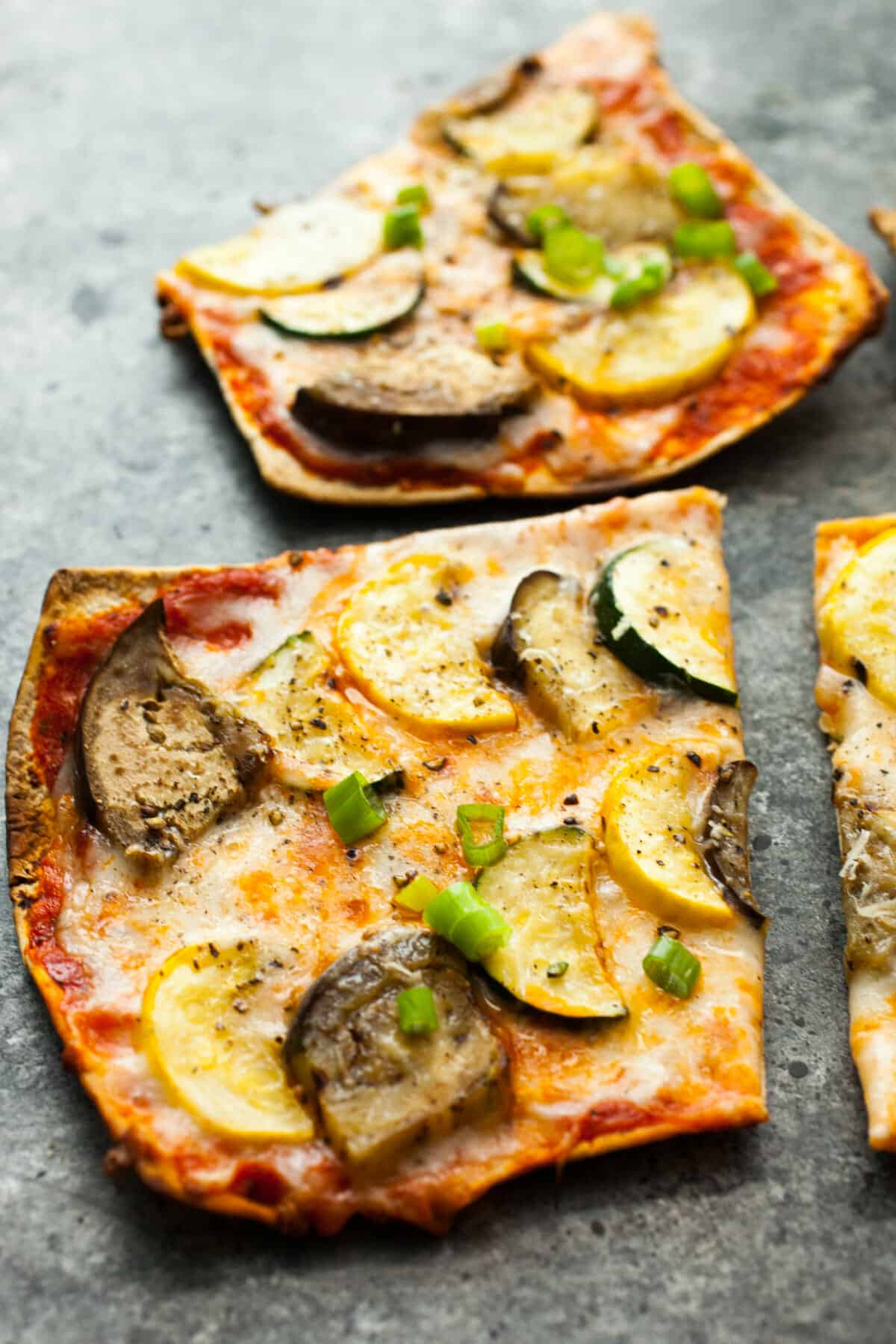 Here are a few other unique pizza ideas!