One of my favorite parts of the holidays are the food traditions that come with it. Whether it’s homemade latkes or something more substantial like a full prime rib, I find that people really look forward to preparing and sharing the same things this time of year. This GIANT Sweet Potato Cinnamon Roll is officially a new tradition in our home!

This is the first year that we’ll be working through the holidays with a near-one-year-old kiddo. While my main focus is making sure he doesn’t swallow an ornament, I’ve found myself thinking more about what sorts of traditions I want to create for him as he grows up.

One that I’ve done for the last few years and hope to continue is making cinnamon rolls. I love spending the time to make a homemade version (usually I make the dough the night before). I think I like them because they are an event and take some time and patience. This giant sweet potato cinnamon roll is no exception.

It’s also a stunner of a thing though. You slap this bad boy down on the table on Christmas morning and your family will know it’s a special day.

To make sweet potato puree, peel and cube one medium sweet potato. Boil sweet potato for 15 minutes until tender. Then drain and mash and measure out one cup for recipe. You can also use canned sweet potatoes!

TO make dough:
1) Warm milk and orange juice in the microwave on high for 15 seconds. It should be warm, but not steaming or hot. Add to a mixing bowl and stir in yeast. Let sit for 5 minutes.

3) Once combined, stir in flour one cup at a time.

4) Using a stand mixer: mix with the dough hook for 4-5 minutes until the dough is soft and combined well. You can also do this by hand by working the dough vigorously in the bowl.

When dough is really soft and smooth, add dough to a clean metal bowl that has been lightly oiled. Cover and let rise for two hours until it doubles in size.

To make Roll (or rolls):
1) Stir together filling ingredients except softened butter in a small bowl.

2) When dough is doubled in size, flour a clean surface and roll dough out into a large rectangle. If you’re measuring, shoot for a rectangle that’s about 10×16 inches. Nice and big.

3) Spread softened butter over the surface of the dough. Then sprinkle with filling mixture. Cut dough into 1 1/2-inch thick slices. You can eyeball it.

4) Roll up one strip of dough and place it in the middle of a buttered 12-inch cast iron skillet. Then start wrapping other dough strips around the center until all the dough is wrapped, forming a large cinnamon roll. Alternatively, you can roll each strip into it’s own roll and place the individual rolls in a baking dish.

5) Cover the large cinnamon roll and let it rise for 30 minutes. Preheat oven to 350 degrees F.

6) Bake large cinnamon roll for 40-45 minutes until center is cooked and top is golden brown. If you have a thermometer, the internal temp should be 190 degrees F. (if you’re doing individual rolls they will need 30-35 minutes)

Make frosting by combining ingredients in a stand mixer with the paddle attachment or whip together with a hand mixer. Beat together the softened cream cheese and milk and then add the powdered sugar in 1-cup batches until the mixture is thick, but still pourable.

This is a pretty standard enriched dough with one little change. I added some mashed sweet potato into the mix. It adds extra moisture to the dough and gives it a nice color. You can’t really taste it too much though in the final version.

Start the dough by warming some milk and OJ and adding it to a mixing bowl with the yeast. Let this sit for a few minutes until it’s bubbling. If the yeast doesn’t look like this, you need new yeast!

For the sweet potatoes, you can just peel, cube, and boil a sweet potato for about 15 minutes. Then drain and mash it and measure out the right amount. You can also just use canned sweet potatoes.

Mash that together with the egg, sugar, melted butter, and salt.

Mix that into the yeast mixture and then add the flour in one cup batches. You can either use a stand mixer with the dough hook attachment to mix the dough or you can just knead the dough in the bowl.

Either way, the sweet potato cinnamon roll dough should be nice and soft and spring back if you push on it. It’s an easy dough to work with.

Cover that bad boy and let it rise for about two hours. It’s kind of hard to see that mine doubled in size, but I’m using a really big bowl.

You can absolutely make the dough up to this point the night before. Rather than letting it rise on the counter, just stick it in the fridge and it will rise slowly overnight.

The filling for this giant sweet potato cinnamon roll is pretty standard. I like some sugar, brown sugar, pecans, and cinnamon. Lots of cinnamon actually.

Roll out the dough on a lightly floured surface. Ideally, you would end up with a large rectangle that’s about 10×16. Since you’re making one large roll, the dimensions aren’t actually that important. If you were making individual rolls (which you can do), you’d want to be more careful to make sure you get identical rolls.

Brush the dough with softened butter and spread on your filling.

How to Make a Giant Sweet Potato Cinnamon Roll

Cut the dough into 1 1/2-inch wide strips and start rolling!

Roll up one strip and place it in the center of a 12-inch cast iron skillet that has been buttered.

Then start wrapping the other strips around until the roll is done! Don’t worry if the roll doesn’t go all the way to the edges right now. It’ll expand as it bakes.

Press down on the dough a bit also to try and even out any height differences.

Let this roll rise a second time for 20-30 minutes while you preheat the oven to 350 degrees F.

Then bake it for 40-45 minutes until it’s golden brown and cooked through.

Make the frosting while the roll is baking. Whip together the softened cream cheese and milk and then beat in the powdered sugar until it’s thick, but still pourable.

Then frost this sucker.

Dust the finished sweet potato cinnamon roll with a little orange zest for a pop of flavor.

Cut the roll like a cake or peel off layers. Whatever works.

No doubt, this is a cooking project, but what better time to try it out then the holidays.

Let’s all agree that the Giant Cinnamon Roll tradition is a pretty good one! 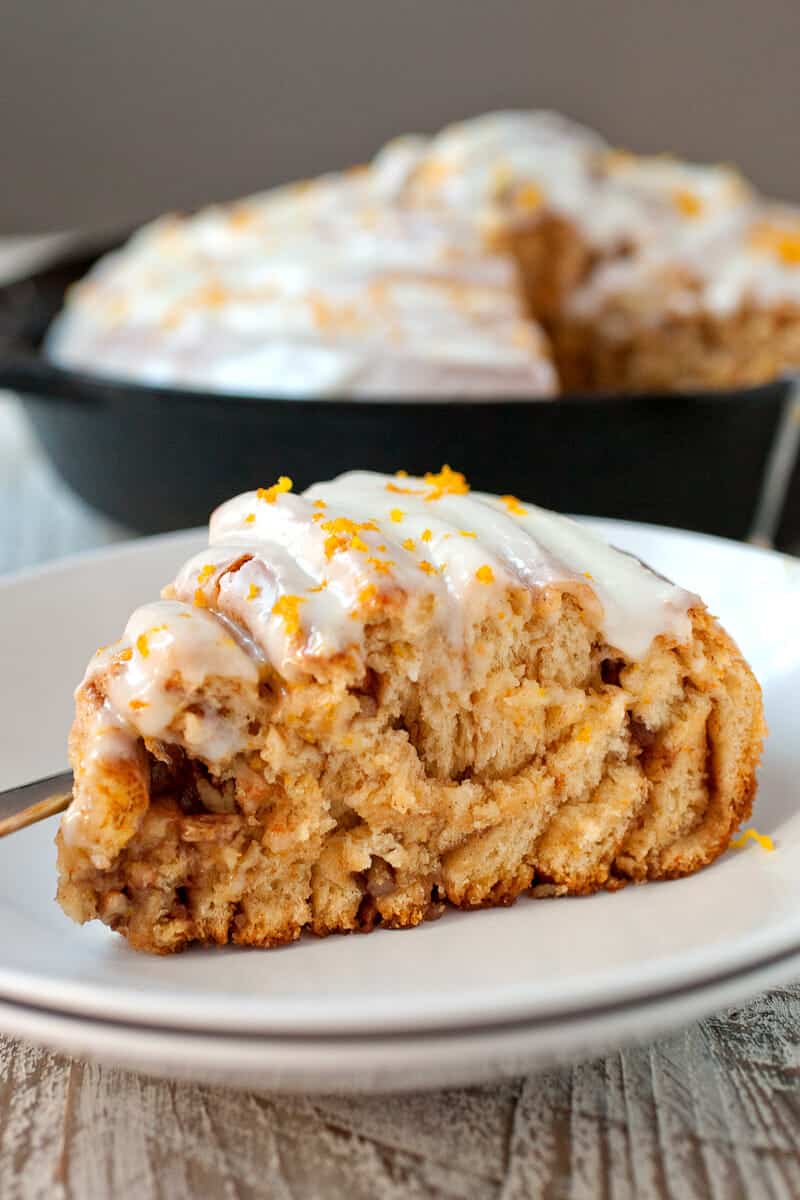 Here are a few other great Cinnamon Roll Recipes!