Last week, instead of a poll I asked you all what I should do a homemade trials on last Friday and the resounding word was to try out French Fries!

I’m happy to oblige and I knew this would be a tough one!

As always I did my best make a level playing field homemade version and then compared my version and a few store-bought varieties in the areas of TIME, COST, NUTRITION, and TASTE.

Let’s see how I did!

For my version, I wanted to make baked fries instead of actual deep-fried french fries because all of the store-bought version involved baking.

It’s not even really worth posting this recipe for baked french fries because it’s so straightforward. Basically I just peeled and sliced up a few potatoes and then gave them a quick rinse in cold water.

Then dry the fries really well and toss them with a few tablespoons of vegetable oil and a good seasoning of salt and pepper.

You’ll have to bake these for close to 30 minutes, stirring them occasionally, until they are crispy and browned.

I chose two varieties of frozen fries to do a comparison here. Cascadian Farms and Ore-Ida. Both are pretty common and available in most grocery stores.

Let’s see how the breakdown went!

The two frozen varieties were a complete tie on this, but the homemade version lagged by about 10 minutes. I’ll also say that I didn’t quite agree with the recommended cooking times on either of the frozen fries. I wanted them much crispier and ended up baking them for an extra 7-8 minutes.

Still though… the frozen varieties were noticeably faster than the homemade version! 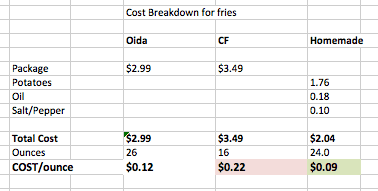 It turns out potatoes are cheap!

The homemade variety pretty easily won on cost. You are paying a lot for convenience in the case of frozen french fries! 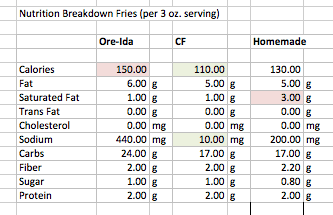 There is a few subtle differences here on nutrition, but to be honest, I think this is mostly a tie with one exception. The Ore-Ida version has substantially more sodium than either the CF brand or the homemade recipe (I sprinkled on a good dash of kosher salt in my seasoning). If you’re worried about your salt intake, you may want to tread lightly there!

But, even with that said, there isn’t a lot to differentiate these items. If I had to pick a true winner, the CF brand is fairly healthy, but it’s subtle and all of these are basically just made of the same thing. 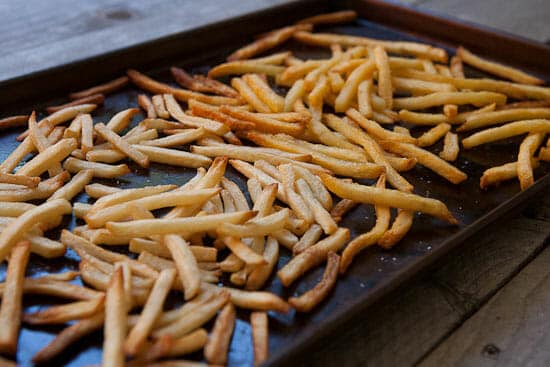 This is where I get to eat a big slice of humble pie!

My homemade version was absolutely not the best. Betsy and I both agreed that the Ore-Ida version was hands down the tastiest and crispiest fry. (It’s the one in the back in the above picture).

I think part of this is because I’m fairly sure they flash fry their fries before freezing them so they get really crispy. While you could do this at home, I think it’s unrealistic to do that regularly which is why I didn’t for the comparison recipe.

It did make a noticeable difference though and they were just simply much tastier than my version!

Well, I think I lost this one!

The only category I solidly won was the cost category and really that would only factor in if you were eating fries every day (which I wouldn’t recommend).

Here’s what I will say. I’ve made a ton of fries in my day and if you happen to have a frier setup (like for a deep fry party maybe), then by all means make fresh french fries! They are delicious.

But, for everyday meals, the frozen ones are just fine! Nutritionally, you are talking about basically the same thing and they have really mastered the flash fry/freezing process so I don’t feel bad about recommending it to those interested!

That said, if anyone disagrees (or has a killer baked french fry method that you think could compete) leave a comment!