Have you ever RSVPed for a party after the party has already happened? It’s like you dropped the ball AND missed the ball entirely?

Sometimes that’s how I feel when I discover a cooking trick that’s been around for a while, but I somehow completely missed it. I saw the little mason jar blender hack that I use in this post on Pinterest and thought 1) What a cool trick and 2) That’ll never work!

Then I noticed some of the pins were from cerca 2013.

But, I would imagine that there are still many people out there that don’t know about this trick so I figured I would spread the word (and also I just wanted to try it).

Turns out the hack for mason jars and blenders completely works and makes morning smoothies beyond easy. Because you can freeze the ingredients in the mason jar and drink the smoothie out of the jar, you just blend it up and breakfast is ready!

Mason Jar Smoothies made in advance and frozen. Then use a quick blender hack to make a fast breakfast smoothie with minimal dishes!

1) Peel and roughly chop carrots. Divide them between six mason jars and add a handful of spinach to each jar.

2) Peel a pineapple, cut it into quarters and cut out the core from each quarter. Chop up two quarters and save two quarters for something else (eating). Add sliced bananas, blueberries, and chopped pineapple to mason jars in an even distribution.

3) Add 2 tablespoons greek yogurt to each jar and top with a tablespoon of ground flax. Seal the mason jars and freeze.

4) When you’re ready to make a smoothie, open a jar and add a cup of orange juice.

5) Remove the blade, washer, and housing for a blender and assemble it on the mason jar. It should screw on in place of the mason jar lid and be a water tight seal.

6) Stick the mason jar on the blender and blend until smooth!

TIP: Before you add a bunch of ingredients to the jars, assemble one on the blender empty to make sure it fits correctly.

The smoothie world is large and while I gave the recipe I use a lot for smoothies for this recipe, I would recommend you make it your own. If you have leftover fruit or veggies in the fridge, they will almost certainly work in a mason jar smoothie. I would maybe stay away from spicy stuff or really aromatic stuff (garlic smoothie?!), but otherwise it’s a free world.

Carrots and spinach are always a good, cheap smoothie base though. You can chop stuff pretty roughly and just toss it in the jars.

I always like blueberries in my smoothies. Normally I buy the frozen kind, but since I’m going to freeze these, I used fresh which were actually cheaper on this day.

If you have any bananas that are about to go bad, toss them in also.

Pineapple adds some nice citrus to the smoothie. I just cut the peel off and diced up about half of the pineapple which was enough for these six jars.

If you want to get fancy, you can try this spiral method of peeling your pineapple, which looks awesome but is a bit unnecessary for a smoothie.

Pile in all the fruit!

I added two other things to my mason jar smoothies: Greek yogurt and flax for a little extra fiber and creaminess. You could add chia seeds, honey, or any number of other things. Fill up the jar, but make sure to leave enough room for some juice so you can blend the thing on day two.

Ready for a Mason Jar Smoothie?

Put a lid on the mason jar smoothies and freeze them overnight. They would keep fine in the freezer for a few weeks. I’m not sure I would leave them longer than that though or they might develop some off flavors.

When you’re ready to make a smoothie, add about a cup of orange juice to the mason jar. You could use any juice or just water, or a mix of juice and water.You do need some liquid though because everything in the jar is frozen solid!

This is so cool.

Remove the bottom from your blender jar along with the blade and gasket. It should look something like this!

Amazingly, if you have a regular sized mason jar (not the wide mouth), this will screw right on to the jar and be a water-tight seal!

BIG FAT TIP: Before you make up a huge batch of these, take apart your blender and actually make sure yours will work on a mason jar.  It would suck to make these jars and then just be stuck with jars of frozen ingredients because your base won’t fit on the jars.

Assuming it does though, you can screw the mason jar right into the blender and blend away!

My favorite part of this method? You don’t have to clean the blender container! It’s so much easier to clean out the mason jar and the base!

Having these ready, you can make a breakfast smoothie in literally about two minutes. It’s awesome and the finished smoothie is in its own glass!

Let’s talk about how great mason jar smoothies are. Leave a comment! 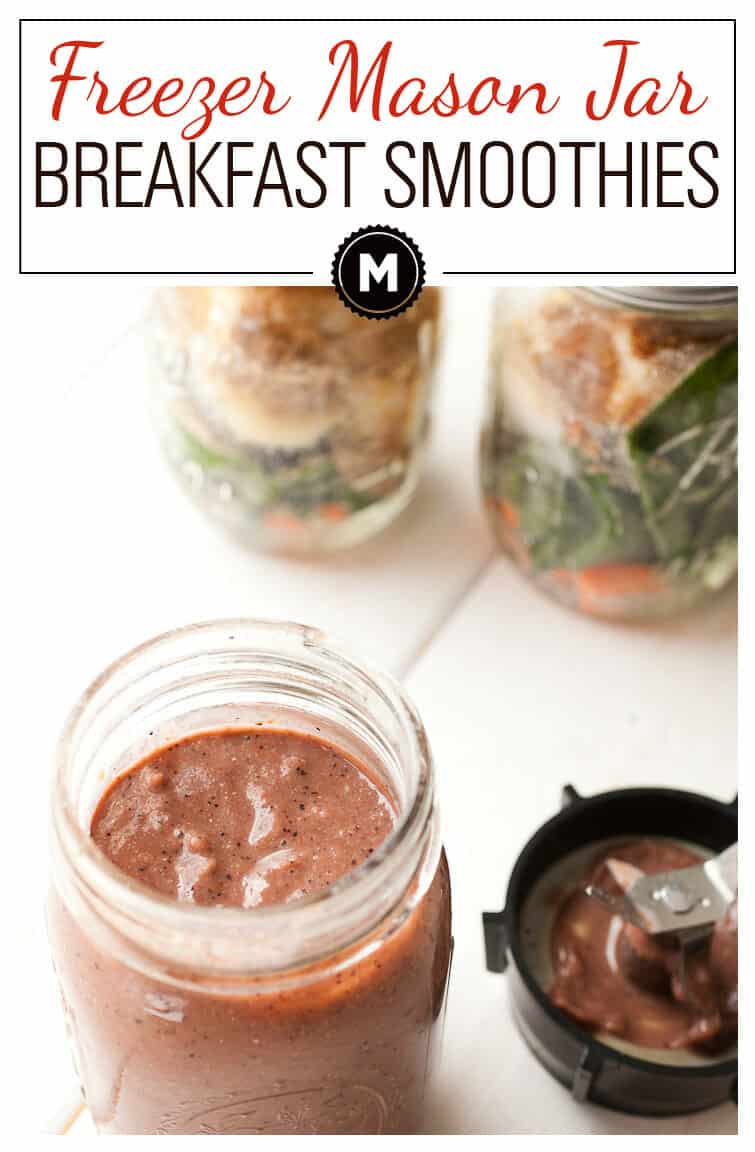