The weather in Denver has taken a turn for the best this last week. It has been almost T-shirt weather, but you can still see the snow-covered Rockies in the distance.

So, while we aren’t completely into springtime yet, I was kind of over heavy dishes last week. I wanted something light and fresh that we could eat out on the porch with a light beer or chilled glass of wine.

While normally you fry or bake falafels and serve them with pita, this falafel salad is a totally fresh take on the ingredients. Same flavors, but easier to make and lightened up!

This is one of the easiest and freshest salads I’ve made. It keeps great for days and makes great lunches or side dishes.

Adapted from a Budget Bytes recipe.

1) Cook bulgar by toasting it in a dry pot over low heat for 1 minute. Then add 1 cup of water to the bulgar, cover and cook for about 20 minutes until bulgar has absorbed all the water (if the pot looks very dry, add more water). Once bulgar is cooked, remove it from heat and fluff with a fork.

2) While bulgar cooks, chop the veggies. Take your time to chop the onion and cucumber so there aren’t any huge chunks.

3) In a large bowl, toss together chopped herbs, veggies, and chickpeas. Stir to combine and then stir in the cooked bulgar.

4) For the dressing, whisk together ingredients until the tahini is smoothed.

Most of the ingredients in this recipe are very basic and stuff you might even have in your kitchen. The one thing you might have to hunt down is bulgar. Bulgar is basically wheat grains that have been cracked and partially cooked. You should be able to find it cheaply in most bulk stores.

If you can’t find it though you could honestly substitute couscous or something like brown rice. (Just cook those things according to instructions.)

To make the bulgar though, toast it in a DRY pot for a minute over low heat and then add the water to it, cover the pot, and let it simmer for about 20 minutes until the bulgar absorbs the water.

When the bulgar is done, remove it from the heat and fluff it a bit. This stuff is so good in all kinds of salads.

Lots of veggies go into my version of this salad. Grape tomatoes, cucumbers (no seeds) and red onion, plus a boatload of parsley and cilantro!

Toss that all together with the drained and rinsed chickpeas.

Look how fresh and delicious this salad looks!

Don’t forget the dressing! You don’t need a food processor or anything for this. Just whisk the ingredients together in a small bowl until the tahini is smooth. You can taste the dressing and adjust it if you want it spicier or saltier.

You could stir the dressing into the salad, but personally I like to drizzle it over and serve the dressing on the side.

As the weather gets warmer, this falafel salad needs to be on your menu! Whether it’s for a picnic or a light dinner, you can serve it with so many things! 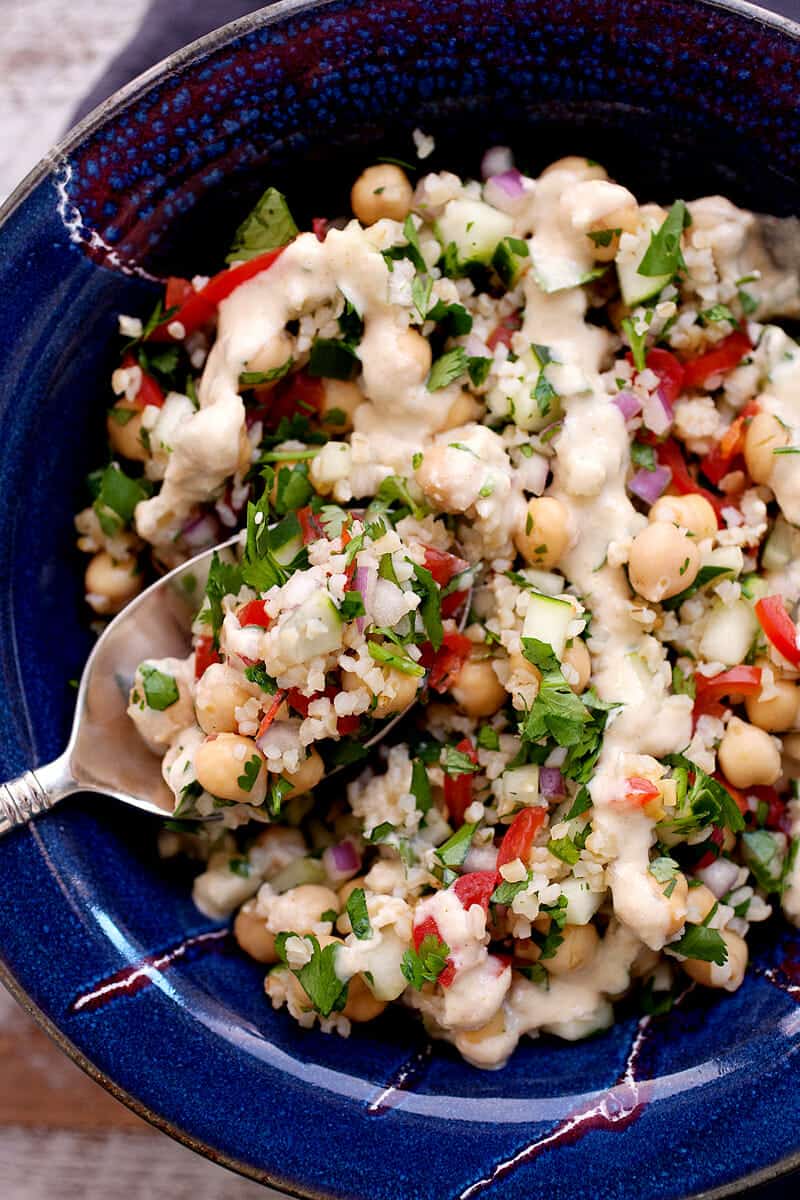