I’ve been binge watching The Great British Baking Show on Netflix recently and I’m pretty sure it’s the best cooking show I’ve seen. I just love how nice the competitors are to each other and how great they are at baking crazy and complicated baked goods. Plus, I love that there isn’t any American-sized prize. It’s just for the love of baking!

On one episode – I can’t remember which exactly – they were making a bunch of different Eclairs and one of the competitors made a savory one. It dawned on me that an eclair is really the same size as a hot dog bun and the idea kind of stuck around in my brain until I had to try to merge the two together.

It turns out (as with most things) I’m not the first to try this. Apparently there is a chocolate eclair stuffed with a hot dog, but that sounds pretty odd to me. My version is 100% savory and works perfectly. The bun ends up being crunchy on the exterior but oh-so light and airy. And you can top it with whatever you want!

I was completely giddy making different versions of these Eclair Hot Dogs, but trust me when I say that these are NOT a gimmick. They are very, very delicious.

Normally Eclairs are thought of as a dessert, but the dough works fantastically in the savory world also. Believe it or not these aren’t that hard to make and WOW are they good. A total winner!

Let’s start with the dough because that’s really the only slightly difficult part of this recipe. Personally, I find choux dough to be easier to make than many other types of dough so I’m not sure what the great big fuss is about it. You just have to make it in two stages. The first stage is in a pot and the second is in a mixer.

I think it freaks people out because the idea of cooking a dough is odd.

But it’s not hard so dive in.

Start by adding water, butter, and salt to a medium pot over medium-high heat until the butter is melted. Then stir in the flour with a wooden spoon. Bread flour is best, but you can use all-purpose flour as well.

Stir this over low heat for a few minutes until the dough comes together in a shiny, smooth ball of dough. It should be really soft, but it should pass “the spoon test” meaning that you should be able to stick a spoon in it and the spoon will stand up for at least a few seconds.

Next, it’s time to add the eggs, but if you add the eggs now they will scramble because the dough is so hot. So add the dough to a mixer and mix the dough with the paddle attachment for a few minutes just to cool it off.

Then add the eggs one at a time!

You can pipe choux dough into any shape you want so I tried a bunch of different ways of putting hot dogs in it. I tried some where the hot dog was completely covered with dough. Some where I just pressed the hot dog into the dough and some that I just baked without a hot dog and cut those open like a true hot dog bun.

Before baking, I recommend brushing the dough with egg wash and sprinkling on some sesame seeds.

Baking choux dough at a few different temps (first hot and then colder) gives best results. You want to start it off hot so a bunch of steam builds up and it rises. Then you want to do a lower temp which will dry out the dough without burning the crust.

The results are pretty great.

I had high hopes for the hot dog that was completely encased in dough, because that most closely resembled eclairs, but it didn’t work really. There was just too much dough on it and the dough kind of separated from the dog. Tasty, but not the best.

Turns out the version that worked the best was also the easiest. Just press the hot dog into the dough and as it bakes the dough rises up around the dog, basically making a bun. 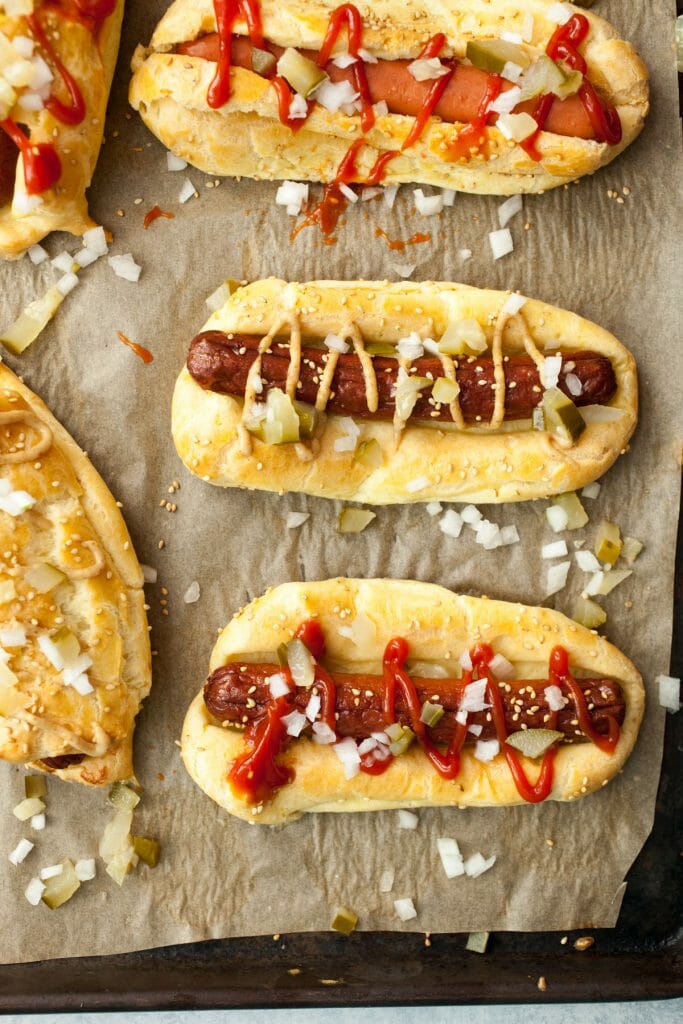 Biting into the Eclair Hot Dog is awesome. The dog is salty and crispy and the dough has this beautiful crackly crust on it but is light and airy on the inside.

These are NOT as hard to make as real eclairs. They don’t need to be perfect and you don’t have to make a filling or glaze or anything. They are just a fun little twist on an American classic that I hope you try.

I absolutely loved cooking them AND eating them. 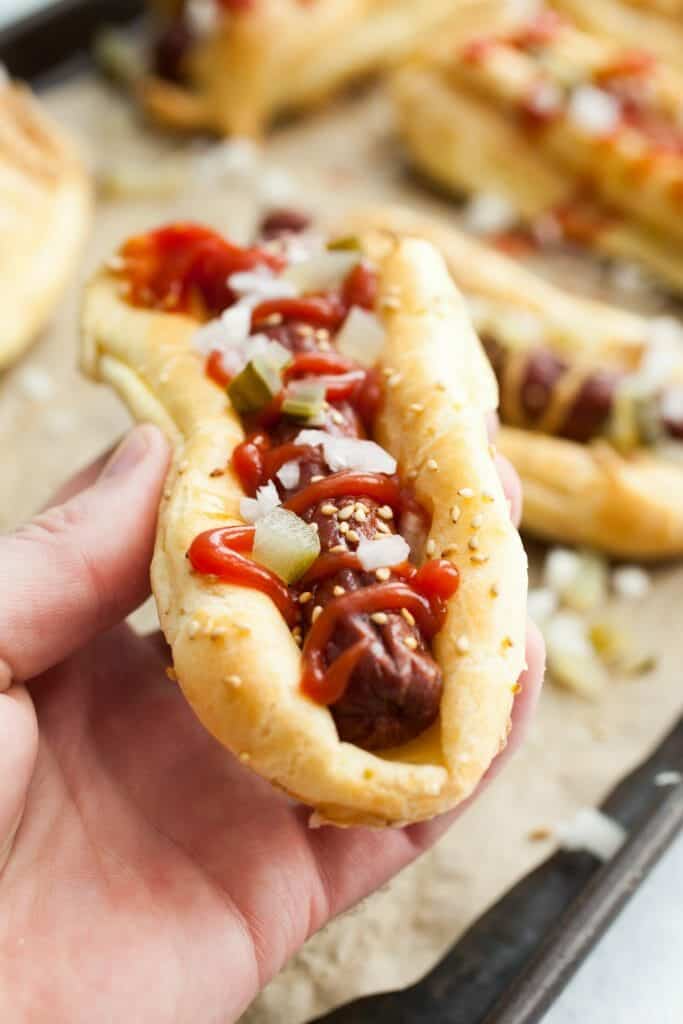