Some people think that when you’re married to a food blogger you must eat delicious things for every meal. This is sometimes true, depending on the editorial calendar.

When it is almost certainly not true is breakfast. Especially, during the week!

Waking up and getting out the door with a dog who needs walked and a baby who needs literally everything is not exactly the time to make an eggs benedict.

Most days we have oatmeal. By most days, I mean everyday. Specifically, we do an overnight oatmeal situation where it sits overnight and then we just have to heat it up in the morning.

So, when I DO have the time to make something special, it’s never oatmeal.  Except this one time. This one time when I wanted to make an oatmeal that tasted like a damn cinnamon roll. It’s special, but it’s also way easier than making actual cinnamon rolls!

Steel-cut oats simmered with vanilla and cinnamon and served with a just-sweet-enough date puree and, of course, icing!

For oats:
1) Add water, vanilla, and cinnamon to a medium pot with oats. Cover and heat until simmering. Turn heat down to low heat and simmer oats until they are soft and cooked through, 30-40 minutes. If the oats get too thick, add more water.

For date puree:
1) Chop dates and combine with other ingredients in a food processor. Process until mostly smooth.

If you don’t have a food processor, you can mince the dates very fine and mash them together with the other ingredients for a more coarse spread.

For icing:
Soften cream cheese and beat with a hand mixer until smooth and creamy. Add milk and continue to mix. Then start adding powdered sugar one cup at a time until icing is thickened. It should be thinner than a cake frosting.

The base of this bowl is obviously the oatmeal. While you could use rolled oats, I think steel-cut oats are always the best.

Again, you don’t have to cook them from scratch. You can bring the water to a simmer and add the oats with a cinnamon stick and some vanilla. Kill the heat, cover it, and let it sit overnight. Then all you have to do is reheat it the next morning. It’ll be perfectly cooked.

If you do cook it from scratch it’ll take 30-40 minutes to slow simmer steel-cut oats. That’s just the way it goes!

A few years ago I tried to cut back on the sugar in a normal cinnamon roll by replacing almost all of it with dates. My date cinnamon roll kind of changed my cinnamon roll game and now I do that all the time.

This puree just has a little brown sugar and lots of dates. They are naturally very sweet but also just more complex than brown sugar. It’s a better situation.

Add the dates to a mini food processor with some lemon, brown sugar, and water. Puree it until it’s mostly smooth. If you don’t have a food processor, you can mince everything and mash it together but it won’t be quite as smooth.

You can absolutely make this puree a few days in advance if you want. It keeps great in the fridge.

To be honest, the oatmeal and the date puree is really delicious just like that. You don’t need this part, but it definitely completes the cinnamon roll feel.

Whip some cream cheese until it’s soft and then add the milk and powdered sugar.

This mixture shouldn’t be as thick as cake frosting. It should be easy to drizzle.

So, if you didn’t catch it, everything in this recipe can be made in advance.

It’s definitely fancy for oatmeal, but man is it good. And again, easier than actual cinnamon rolls! It seriously tastes the same. Not too sweet flavors with hints of cinnamon and vanilla.

It’s a good bowl of breakfast and can definitely make oatmeal feel special! 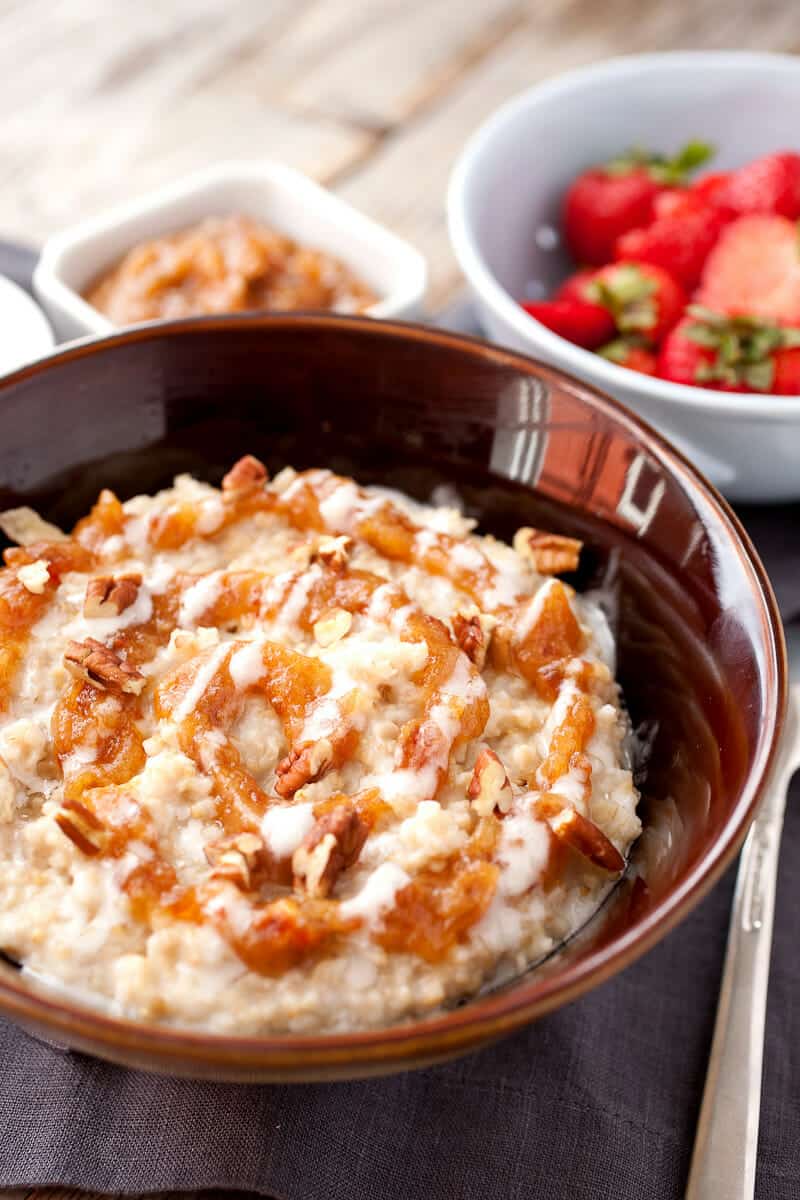