Uses for a Culinary Torch (That Aren’t Creme Brulee) 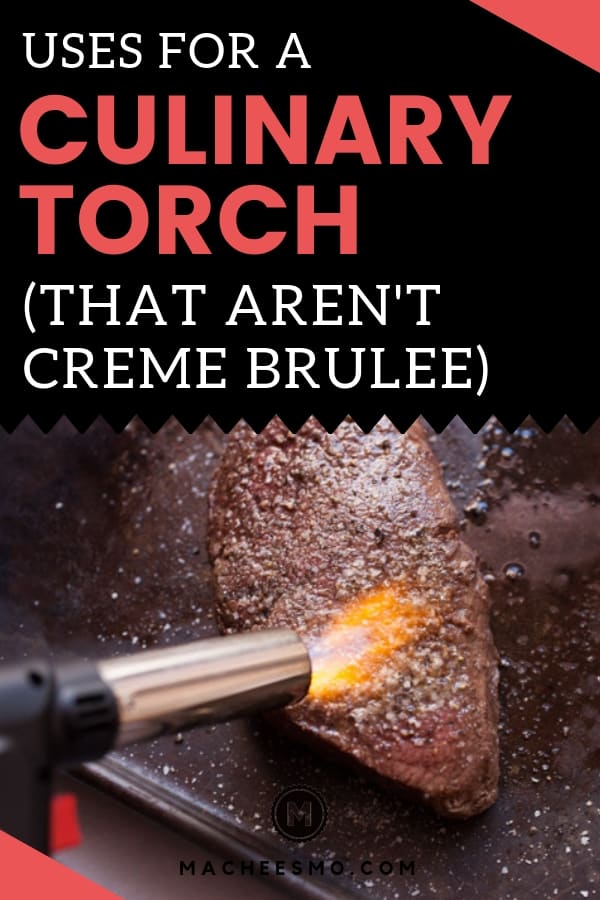 If you’ve been a longtime reader of Macheesmo, you know that one of my pet peeves is single use items. An avocado scooper? A banana slicer? COME ON.

Embarrassingly, until very recently I thought a culinary torch was basically a single use item. I thought you used it to make creme brulee and not much else and so I’ve never really been interested in getting one.

What I wasn’t thinking about was that a culinary torch just shoots out a stream of hot fire. You know what can be really helpful in the kitchen? A stream of HOT FIRE.

There are a bunch of culinary torches out there. You can spend $15 or $100. Personally, I got a middle of the road one that I’ve been experimenting with for a few months. It’s relatively easy to fill up and has a nice stable grip. The only thing I’ll say about it is that sometimes it doesn’t light on the first try. Not a huge deal and I think pretty common with equipment like this.

For a first timer looking to get into the culinary torch world, this is a good model. You’ll also need some butane canisters to fill them up. I just bought a few small ones when I bought my torch. If you’ve ever filled up a refillable lighter, filling up a torch is the same idea.

(As an aside, before we get into the actual culinary uses, you can use a culinary torch as a cigar lighter and it works magnificently. Just don’t inhale on the cigar while you are lighting it.)

This is a super fast way to peel peppers. The cool thing about use a torch to do this is that it just blisters the outermost layer of skin, leaving most of the pepper still crisp. Sometimes this isn’t want you want. If you’re looking for a more roasted pepper texture, then you’ll want to use a different method, but peeling peppers like this works great!

Tomatoes are even easier and better. Screw the old way of dunking them in hot water with an X on them. Just run a torch over the skin and it shrivels up and almost peels off on its own. Amazing!

This time of year I eat grapefruits for breakfast a few times a week. Love them. But, they can get a bit boring.

Add a pinch of cayenne, brown sugar, and salt to your grapefruit and then torch it up. Brulee grapefruit!

This should be a no brainer but you no longer need a campfire to make s’mores. The key with these is to be careful. Keep your heat on low and work slowly or you’ll completely blacken the marshmallow.

You can make one gooey s’more with it though!

I wouldn’t recommend using a torch to sear a steak completely just because it can pick up off flavors from the gas if you get too close and hold it for too long, but let me introduce you to the sugar steak!

There’s an old Denver steakhouse that serves something called a sugar steak. It’s exactly like what it sounds and it’s really good. You can make it at home if you have a torch as you need really high heat for it to work.

Basically cook your steak as you would (cast iron skillet, grill, whatever), then add a mixture of sugar, salt, and pepper to it. I used 3 parts sugar – 1 part kosher salt – 1 part coarse ground pepper. When the steak is done, sprinkle it generously with this mixture and then caramelize the sugar on top.

Makes for a really delicious steak with a crackling crust. And because the heat is so focused it won’t mess up your perfect steak.

In short, I’ve completely come around to the culinary torch and now I use mine pretty much weekly!

If you have a use for a culinary torch, LEAVE A COMMENT! I would love to hear how others use their torches!