This Ginger Pimm’s Cup cocktail was updated on June 22, 2020 to include new directions and photos!

I’m ready to officially announce the Pimm’s Cup as the drink of summer this year.

Okay. If I’m being completely honest, the official drink of summer for me (especially in a year with lots of yard work in my future) is Bud Light Lime. DO NOT JUDGE.

But, many bottles of Pimm’s will be consumed in my house. It’s the perfect cocktail for a hot summer day. It’s not super-alcoholic so you don’t have to worry about canceling plans or anything, but it’ll take the edge off and is one of the most refreshing things in the liquor store.

If this slightly fancy (but still easy) version is too much, you can just toss it over some ice with a bottle of ginger beer or a dash of lemon and club soda and it’s very drinkable. But, because we are all grown-ups, this cucumber ginger Pimm’s cup is a definite grown-up version.

I had to go to two liquor stores in the Denver area to find a bottle of Pimm’s which is a damned travesty. In the summer, every self-respecting liquor store should be peddling the crap out of this stuff.

There are various Numbers of Pimm’s concoctions, which only differ because of their base liquor. My personal favorite is the No. 1 which is has a gin base. It’s perfect for a light, fruity cocktail though.

One of my favorite cocktail tricks from my previous life as a bartender is to muddle cucumber with whatever booze I’m mixing. It’s almost undetectable in the final drink, but it just rounds out the edges a bit. Hard to describe, but trust me that it’s worth it. Just seed a few inches of a fresh cucumber and mash the flesh of the cucumber (discard seeds and guts) together a good measure of Pimm’s No. 1.

I like to use 4-5 oz. of Pimm’s for two cocktails. Again, it’s not a super-strong liquor.

Strain out the cucumber of course because it would be pretty amateur to leave cucumber guts in your pretty cocktail.

Much like the Bloody Mary, a good Pimm’s Cup will have a variety of garnishes. Lemon and lime are standard but I like to go a little sangria here and add some fresh berries. Grab a few kiwi berries if you can find them. They look amazing in cocktails.

After you strain the Pimm’s into the glasses, add a bunch of ice and top off the drink with a really good ginger beer. Good ginger beer isn’t cheap but it makes the difference between an average cocktail and an excellent one.

It’s not crazy to pay $6 for a four pack of good ginger beer.

Then toss in all your garnishes and some fun straws and you’re ready for summer.

May your Cucumber Ginger Pimm’s Cups be refilled automatically by someone you love. 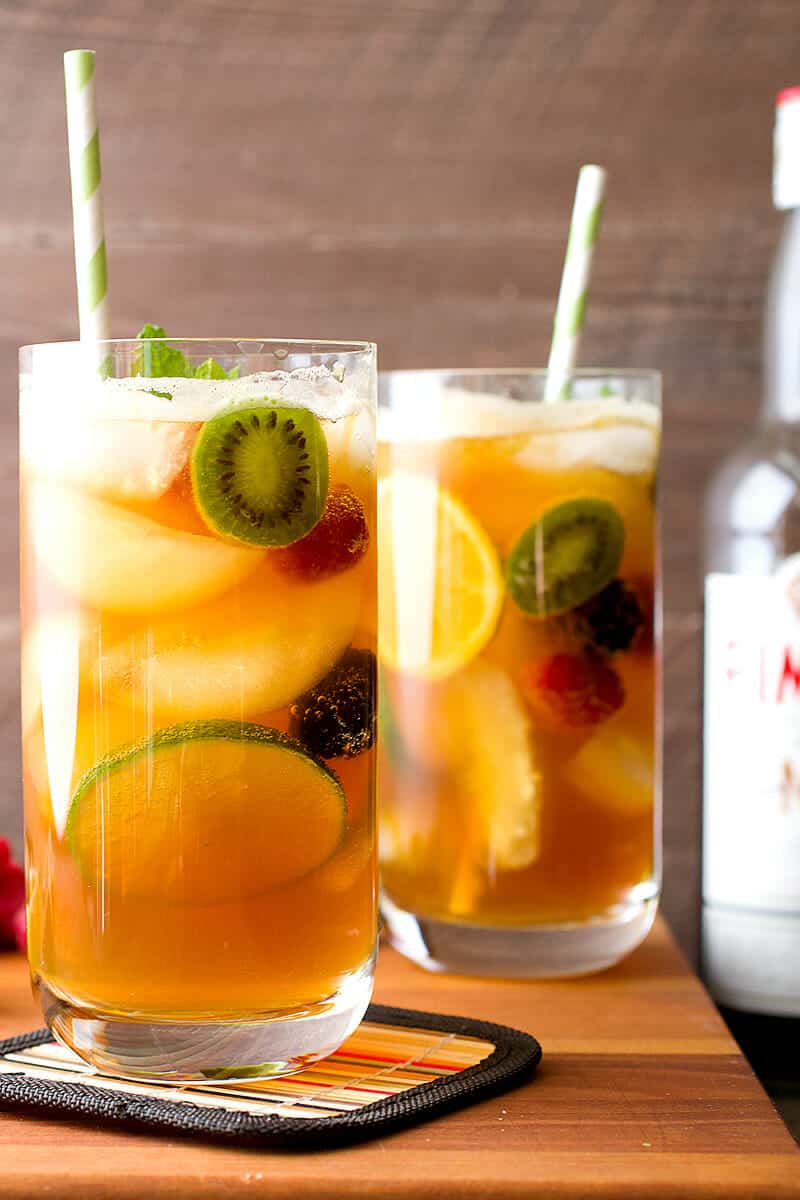 This Ginger Pimms Cup is my official drink of summer. Light, fruity, refreshing, and just a few ingredients. Make a few of these and life is good!

1) Cut a section of washed cucumber in half and scrape out seeds. Cut into a few pieces.

2) Add pieces of cucumber to a cocktail shaker and muddle well. After mashing for a minute, add Pimm’s and continue to mash to mix flavors.

Here are a few other great Summer Cocktails: