That is sometimes true.

When this recipe won the poll last week, I browsed the recipe and quickly realized that it would feed more than two so I invited some friends over. I then proceeded to serve them what is essentially street food, but they didn’t complain because they are good people. Also, because this Cuban Picadillo happened to be pretty darn good.

Spiced ground beef and pork mixed with sweet and savory ingredients and simmered makes for a faster version of a classic picadillo recipe.

2) Dice onions and bell peppers finely. Heat oil in a large pot over medium heat and add peppers and onions along with oregano, cumin, cinnamon, and a pinch of salt. Cook and stir frequently until veggies start to brown slightly, about 8 minutes.

3) Add garlic and cook for another 30 seconds. Then add tomatoes and wine and cook, using the liquid to scrape up any bits. Cook for another few minutes.

4) Stir in broth, raisins and bay leaves and bring mixture to a slight simmer.

5) Add meat mixture in 2-inch pieces to the pot and simmer gently. Cover and stir occasionally to break up meat as it cooks. Simmer for 10 minutes, but try not to overcook the meat or it will dry out.

6) Remove bay leaves and stir in olives and capers. Season with vinegar and salt and pepper.

Serve over beans and rice.

For beans and rice:
1) Add a drizzle of oil to a medium pot over medium heat. Add onions, jalapeno, and garlic and cook until soft, about five minutes. Season with a pinch of salt.

2) Stir in 1 cup of rice and cook for 30 seconds. Add 2 cups of water (refer to rice instructions for exact amount) along with drained and rinsed black beans. Stir together.

3) Cover pot and cook for 15-20 minutes over medium-low heat until rice is cooked through and liquid is absorbed.

Fluff with a fork and serve while warm.

This dish is a classic that’s served in a bunch of different countries and has different ingredients and elements depending on where you are. Even though I’ve never been to Cuba (or Florida for any extended period of time), I’m told that this is a more Cuban variety.

The original dish is simmered for many hours and involves whole chunks of roast that are minced and simmered and minced and simmered with lots of love. This recipe took a bit of a short-cut by mixing together some ground pork and ground beef which might mean a slightly inferior texture, but also saves you a few hours.

Just mix the two ground meats with some baking soda, salt, and pepper, and a dribble of water.  The baking soda acts as a tenderizer and keeps the meat from getting too tough as it cooks.

This recipe starts like many Latin recipes: lots of onions, peppers, and garlic. Also known as sofrito, this is a pretty important mix. Some people will pulse this in a food processor to get a really fine texture out of the vegetables but I decided to leave them a bit on the chunkier side this time around.

In a medium to large pot, add a good drizzle of oil (about 2 tablespoons if you’re keeping track) and then add the onions, peppers, and dried spices. The cinnamon is maybe the most important of the spices. Don’t skip it.

Cook this over medium heat until the veggies start to brown slightly, about eight minutes should do the trick.

Then add the garlic and cook for another few seconds. Next, toss in the wine and crushed tomatoes and use the liquid to scrape up any stuck bits.

Keep building this base by adding in some beef stock, bay leaves, and raisins. The raisins might sound weird but they give the dish some sweetness that is really welcome.

Cook’s Illustrated, who originally published this recipe version, warned against browning the meat before adding it to the sauce, a step I would normally always take. You run the risk of really drying out the meat if you do that I guess, so I skipped it, followed their instructions, and just broke up the ground meat and added it to the pot.

I can see how you run the risk of drying out the meat if you brown it first, but frankly, I thought the meat could’ve used some browning. Just my opinion though!

Cover your pot and let the meat simmer in the sauce for 10-15 minutes. Stir it occasionally until it is cooked through. While you stir it you can break up the meat into smaller bits to make it easier to serve later.

There are some big savory flavors that go into this version at the end, after the meat is completely cooked. If you are feeding others, I recommend asking around before tossing these into the pot. Some people, namely my wife, have intense aversions to olives and capers so I’m always willing to spoon a bit of the mixture into a separate pot.

Personally, I can’t get enough of these things.

Add those to your pot along with a splash of red wine vinegar. Season the whole thing with more salt and pepper and it’s ready to serve!

I served mine over a really basic beans and rice (see the print version for instructions) and garnished it with cilantro.

What I found funny about this dish is that for what is supposed to be simple fare, it has a shocking number of ingredients!  But don’t let that stop you from giving it a shot and don’t be afraid to change it up a bit (just don’t skip the cinnamon).  After all, people have been serving this recipe in one form or another for decades so don’t feel obligated to any step or ingredient.

The flavors do work though and even my dinner guests gave it good reviews for what is essentially a meat pile on a plate. 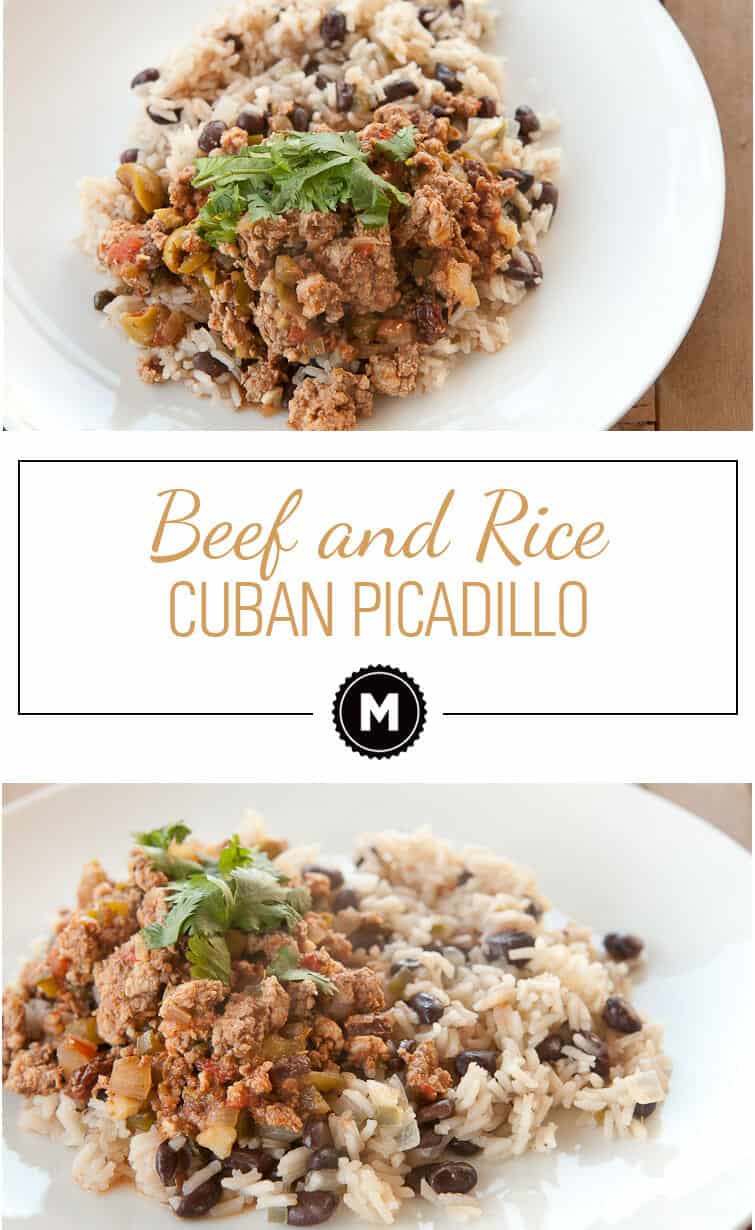