It’s officially fall, or as I like to call it, the season of what-can-I-put-in-a-skillet-with-eggs? The answer is pretty much everything, but first on your list should be this Crispy Brussels Sprouts Breakfast Skillet.

As we’ve discussed many times in this space, Brussels sprouts can span the range of deliciousness: From sad and soggy to crispy and delicious. Can you guess which version I’m shooting for here?

There are a few keys to making this skillet perfectly. Mostly though, it involves the Mosquito Bite rule: Don’t touch it! The more you itch this dish, the more it’ll suck. Once it is in the pan, just let it go.

This simple breakfast skillet has some amazing fall flavors and is my new favorite take on hash. Dig in.

I tried this dish once with just brussels sprouts, but it was missing something. It actually needs some potato to add some body to the skillet. But not too much! It’s one of the few times you’ll see me actually measure out an amount of shredded potato. You just don’t want to overdo it.

Mix together the sliced sprouts with the grated potato and all the spices.

Oh and bacon grease! Instead of oil or butter, crisp up a few pieces of bacon in your skillet over low heat and then pour off the bacon grease into the potato/sprouts mixture. Talk about flavor and it’ll really promote browning on the sprouts.

Okay… actually, you will need to stir it once or twice, but mostly let it sit. That’s how you’re going to get some nice browning. I let mine sit for 4-5 minutes in between stirs.

These crispy bits on the edges are what you’re going for.

Once your sprouts are pretty crispy and browned, turn the heat down to low, make a few wells in the hash and crack in some eggs. If the skillet is really dry, it’s fine to add a drizzle of oil or butter.

Cook the eggs over low heat. Cover them for the last 60 seconds or so to set the whites on top.

I like to garnish this delicious situation with a drizzle of chili sauce and some fresh cilantro. YUM.

I can eat this entire Crispy Brussels Sprouts Breakfast Skillet by myself, if I’m being honest, but you could add an extra egg or two and split it between two people. 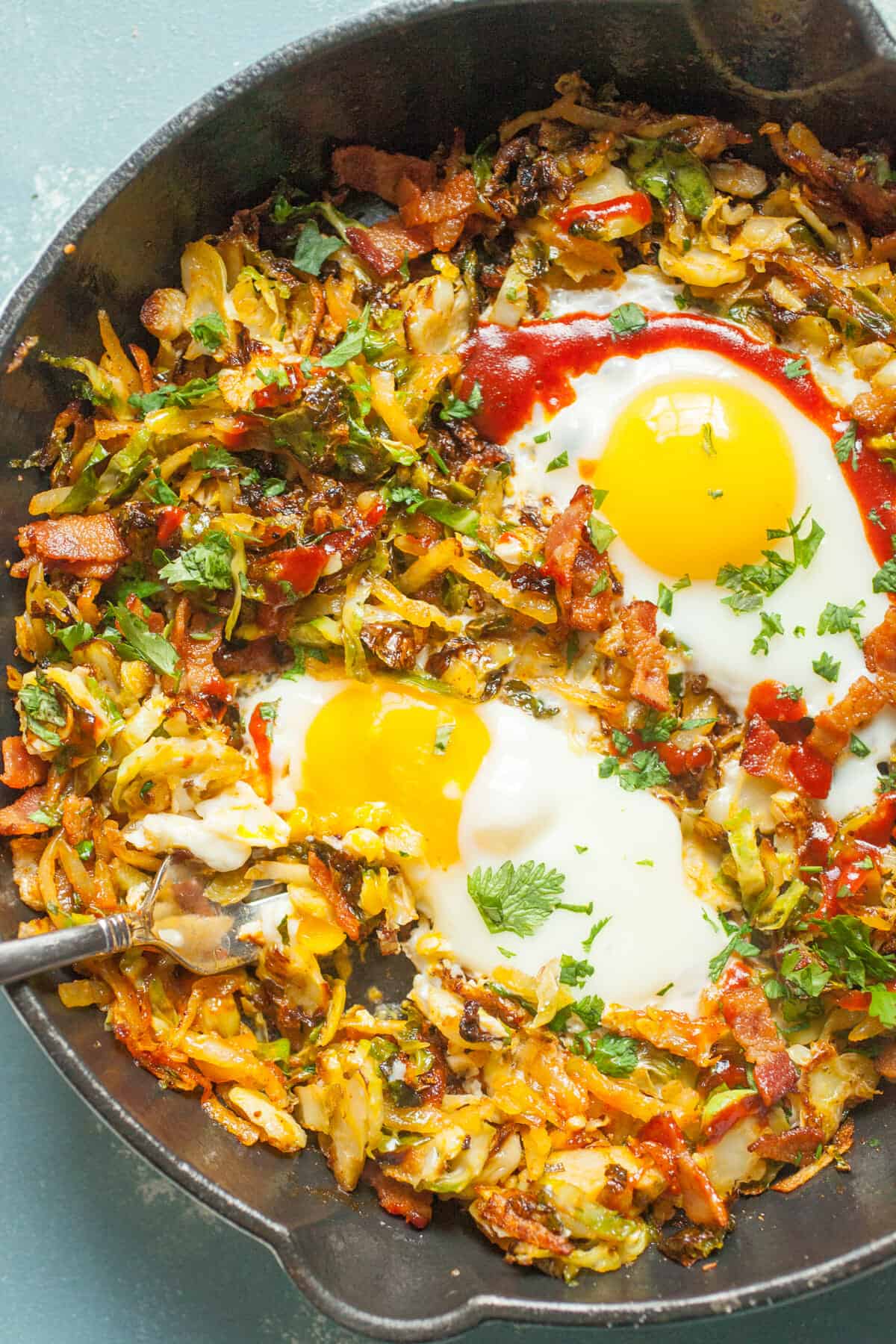 Here are a few other great Sprouts recipes!