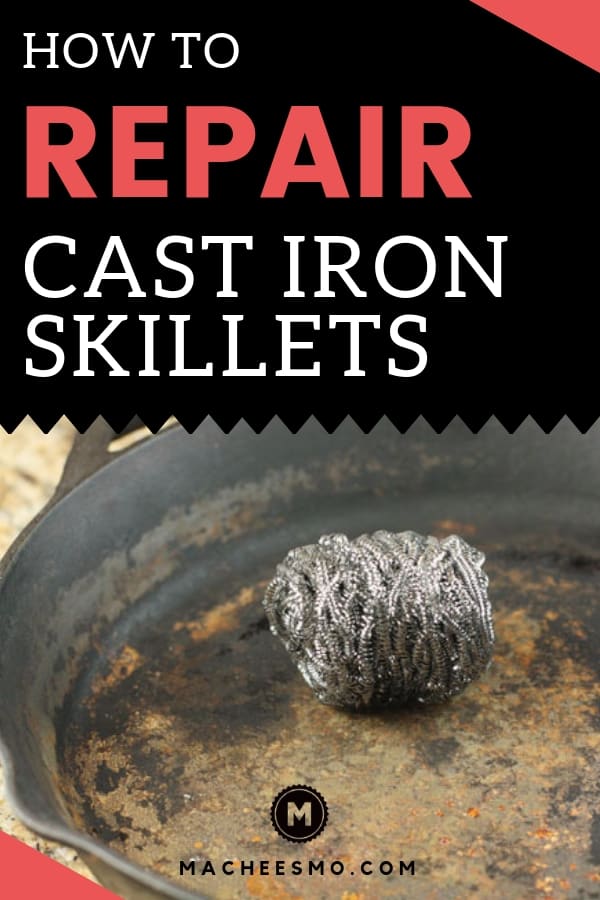 One of the very first pieces of kitchen equipment I purchased with my own money was a cast iron skillet. The above skillet is the same one that I bought almost six years ago. POOR POOR SKILLET!

As you can see, it has seen better days. Generally, if you treat your cast iron skillet well, it won’t get like mine above. But after a few moves and years of use (some improper), mine just got a bit worn. A few months ago I noticed that it was starting to rust pretty badly and by the time I got around to fixing the problem, my skillet was almost entirely rusted out!

Now, some people might say that this means I need a new skillet, but oh no. One of the awesome things about these skillets is that with a little work and a few hours, you can bring it back to almost better than new status.

I figured I’d snap some photos as I went so you can know how to clean a cast iron skillet also.

In fact, if you don’t have a cast iron skillet, you can almost certainly find one at a garage sale if you search around a bit. It’ll probably look as bad if not worse than mine, but with these steps, you can bring it back into good shape.

You probably heard it: “Never ever put soap on your cast iron skillet!”

That’s generally good advice because it strips out all the oils that have seasoned the skillet. When we are looking at a skillet like mine though, step one in getting it back into good shape is to very thoroughly clean it.

That means getting off all the rust and crud and basically starting from scratch.

For this, you’re going to want to pick up some steel wool scrubbers!

Get some really hot water, a good amount of soap, and a scrubber and really go to town on the skillet. I’m not going to lie, it’s hard work.

You want to make sure you thoroughly scrub all the inside of the skillet. Get the sides and the bottom really well. Make sure all the rust is out. It’s going to take 10-15 minutes of good scrubbing to get the job done.

After this, your arms will be exhausted, and you’ll have a nice clean skillet.

This was mine after about 15 minutes of scrubbing. Looking better already!

Of course, the problem is that now this skillet is just a big piece of iron with no coating at all to protect stuff from sticking to it. One of the joys of having a good cast iron skillet is that almost nothing sticks to it.

Right now though, this pan is like Velcro. All the little crevices in the iron are going to make anything that touches it stick to it. You can see how it’s kind of a dull black/gray color. That means it’s clean, but not seasoned for cooking.

Honestly, the hard part is over. Now we just need to get the skillet ready for cooking.

Seasoning, as it’s called, involves cooking a very light layer of fat or oil in the skillet for many hours. As the skillet heats up, the metal expands slightly and the iron basically absorbs the fat. Then as it cools, the oil sticks on the skillet and makes it shiny, smooth, and most importantly non-stick.

You can use vegetable oil for this, but honestly, bacon grease is the best thing for it. So assuming you’re not vegetarian, pull out some good fatty bacon.

Add the bacon to your cast iron skillet and put the skillet on very low heat. After about 20 minutes, most of the fat should have rendered out of the bacon.

After you have your bacon grease ready, remove the bacon from the pan, pour off the bacon grease and save it, and wipe the pan really clean. Be sure to get any bacon bits that are stuck to the pan out of there.

Then, using a paper towel, pour a tiny amount of bacon grease back into the pan and rub it around the pan using a paper towel. There should be a very light layer of oil shimmering on the whole skillet. You don’t want any grease pooling in the pan, just a nice smooth layer covering the whole surface.

Heat your oven to 250 degrees and bake the skillet for an hour.

Take it out, rub it with a bit more oil/grease, then back in the oven for an hour.

After two hours, we’re getting somewhere. Notice how the pan is starting to shine a bit.

I did this same process two more times.

So in total, I baked my skillet for 4 hours at 250 degrees. Generally, two hours will do the trick, but I like to make sure mine is really nice and seasoned. That might seem like a lot of work, but it’s largely hands off.

When my pan cooled down, I had a nice shiny cast iron skillet that looks a thousand times better than what I started with.

Ok. So the real test for any non-stick surface is a fried egg.

Once you’re ready to test it out, put your skillet over medium high heat and let it get nice and hot. Add a few drops of oil to the pan and crack in an egg. It should slide around and flip easily, just as if it were in a nonstick pan!

I passed my egg test!

Cast iron skillets aren’t expensive, but there’s no reason to throw one away if you can fix it like new with a few hours of lazy work, and a few minutes of heavy scrubbing.

So, if you have a neglected cast iron skillet or know somebody who does, now you know how to fix it up!

If you have doubts about why you need a cast iron skillet, here are 10 reasons why you should get one.

350 Responses to “Repairing a Cast Iron Skillet” Leave a comment