This is absolutely not a copycat recipe for the Chipotle burrito bowls. It has some things in common like: chicken, rice, sour cream, cheese.

It differs in some ways, though. Namely, using chipotle peppers as an actual delicious marinade for the chicken instead of just a trendy name. Also, instead of just tossing the ingredients in a biodegradable bowl, I tossed mine in an edible bowl.

So, you see. It’s different in that it’s better.

As you might guess, the hardest part of this whole deal is actually making the edible taco bowls. They are pretty baller but if you don’t have time, you can just toss the stuff in a normal bowl. If you do that though, I’d recommend scooping a few tortilla chips in the bottom for a little extra crunch.

To make taco bowls:
Cover a medium-sized ramekin with foil. Press a large (12-inch) flour tortilla over the foil and then cover it with another piece of foil. Bake the bowl for 15 minutes at 375 degrees F. Then remove the bowl from the foil and it should hold its shape. Bake for another 10 minutes to crisp up further.

Ideally, if you have multiple ramekins you can make a bunch of these at once or you can move tortillas from ramekins to the sheet pan to further bake and replace them with new tortillas until you have the number you need.

For chicken:
1) Slice chicken into thin slices and stir together with minced Chipotle peppers and Adobo sauce from the peppers. Let sit for a few minutes.

2) Prepare the other ingredients. Slice the peppers, cut the corn off the cob, drain and rinse black beans.

3) Preheat cast iron skillet (or nonstick skillet) over medium heat and add a good drizzle of olive oil. Add chicken and cook until the chicken is cooked through, 6-7 minutes.

4) Remove chicken and add corn with a tablespoon of water. Use the water to stir the corn and it should make a light sauce out of anything left in the skillet. Cook corn for a few minutes.

5) Remove corn and add peppers. Season with salt and pepper and cook for a few minutes until they are charred in places but not completely soggy.

To make Cilantro rice: Cook rice as you normally would or according to instructions. When done, drain completely, add cilantro and lime juice. Stir together, cover, and let steam for a few minutes. Fluff rice with a fork and serve while warm.

These aren’t hard in that they are technically hard. The only thing hard about them is that they take some time. If you happen to have 4-6 medium-sized ramekins or bowls that can go in the oven, then you can make enough of these for the recipe in about 30 minutes.

If you have one ramekin, then it’s kind of a production as you have to repeat the process over and over again.

The process is easy though.

Find a ramekin or oven-safe vessel that fits your flour tortilla. (Not pictured below) Wrap the bowl in foil first!

Then press the flour tortilla on the foil and cover it with another piece of foil. This will keep the tortilla in place while it bakes.

Then you should be able to peel the tortilla out without any sticking and it will hold its shape. It won’t be totally crispy yet though.

Turn it upright and bake it for another 10-15 minutes to crisp up further.

Since each of these takes 25 minutes to make, that kind of adds up if you are doing them individually although you can start a second one while the first one bakes off the ramekin.

Okay. Seriously, that’s the hardest part of the recipe and while it’s fun, it’s pretty optional.

What’s not optional is marinating some sliced chicken in a few diced chipotle peppers and a few big spoonfuls of the Adobo sauce from the chipotle pepper can. This chicken will end up being pretty spicy on its own, but after you combine it with everything else, it’ll be perfect.

Before you start cooking, cut some corn off the cob (or thaw frozen corn if you can’t find fresh) and slice up peppers. You need about 1 1/2-2 full peppers for the recipe. I used chunks of a few different peppers for color, but you could keep it easy with one kind of pepper if you want.

Add some oil to a skillet over medium heat and toss in the chicken. Cook it until the chicken is cooked through, about 6-7 minutes.

Then scoop out the chicken and add the corn along with a few spoonfuls of water. The water will help loosen all the good flavors in the skillet and make a light sauce for the corn.

Basically you are just heating up the corn and using it to pull off some of the leftover chipotle flavors.

Then scoop out the corn, crank up the heat to medium-high and add the peppers. Cook these until they start to char in places, but aren’t soggy at all.

Anytime I’m making a Tex-mex burrito bowl situation, I always opt for cilantro rice. Basically just cook the rice as you normally would (I used brown rice here) and then drain it and toss in about 2 tablespoons of minced cilantro and the juice of one lime. Cover that and let it steam for a minute, stir it all together, season it with a pinch of salt, and serve it while warm.

Building the bowl is kind of up to you.

I like to start with a good base of cilantro rice, then I spoon in a little sour cream. Then I rim the bowl with the goodies: chicken, peppers, corn. Then I sprinkle on some black beans, thinly sliced red onions, crumbled cheese, and avocado slices. Last thing: maybe some cilantro and lime wedges for garnish. 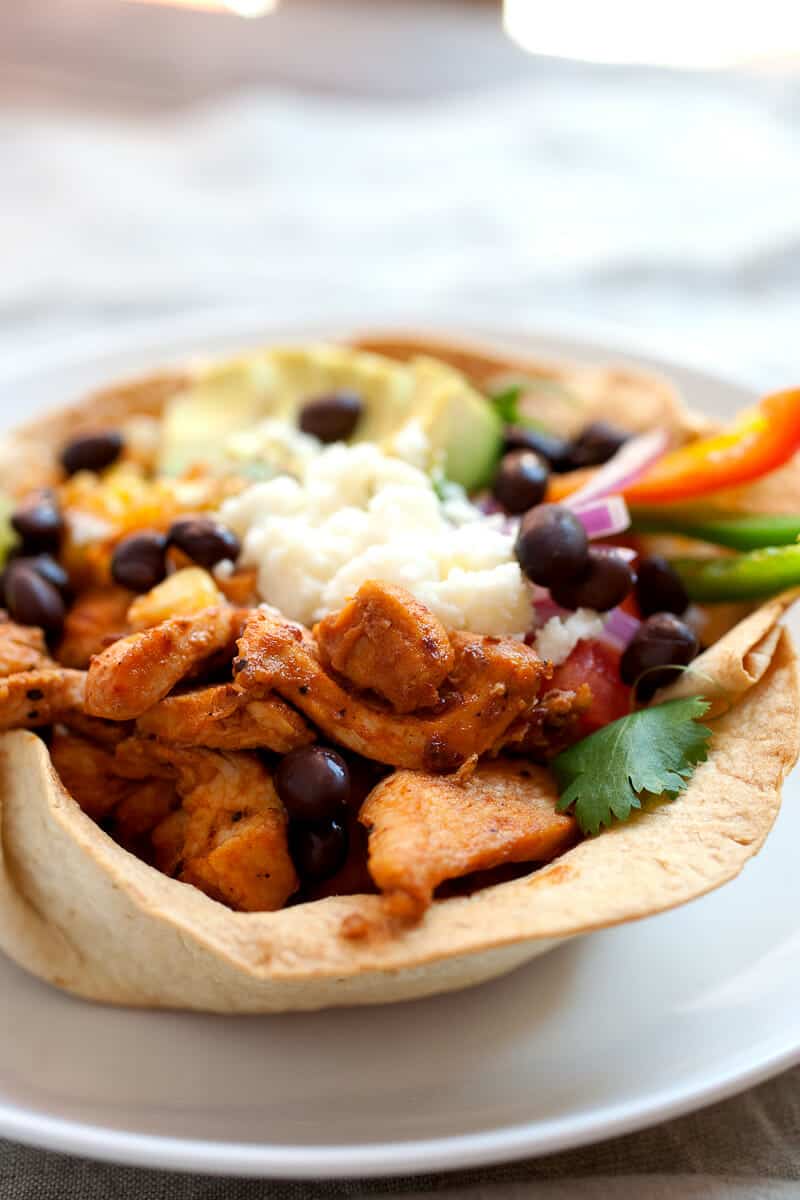