It’s really unfair that my favorite foods are all perfectly ripe at the exact same time of the year: tomatoes, corn, peaches…

Why can’t some of these things be magically ripe in December or something?

Oh well, I guess I shouldn’t complain too much about having an abundance of really fresh and delicious produce.

Smoke ’em if you got ’em right?

I haven’t made an omelet in a while so I thought I would throw one at you all that uses roasted, fresh corn. The idea behind this Corn Omelet is not that you roast/char fresh corn just for this omelet (although you can). The idea is that you have leftover corn from the night before and so you can easily re-purpose it in omelet form!

Charred corn is tossed with tangy Cotija cheese and lots of other veggies and then folded inside a fluffy omelet with pepper jack cheese!

1) To char corn, shuck the husks and remove any silk from the kernels. Lightly rub with oil and season well with salt and pepper. Place ears on a hot grill and cook for about 15-20 minutes until the corn is well charred on all sides. You can also broil the corn under high heat broiler for 10-12 minutes until the kernels are charred.

2) Let corn chill slightly and then slice off kernels. Stir kernels together with crumbled Cotija cheese and paprika.

3) Dice onions, jalapeno, and red pepper. Add a tablespoon of olive oil to a large skillet and cook veggies over medium heat until they start to soften, about 4 minutes. Season with salt and pepper and set aside.

4) Whisk eggs together with milk and set aside.

5) To make an omelet, add 1/2 tablespoon of butter to an eight inch omelet pan. Place over medium heat. Once butter is melted, add about 1/2 cup of egg mixture.

6) As egg cooks, gently press the egg into the center letting the uncooked egg flow to the outside and get contact with the hot pan. Continue doing this until most of the egg is cooked. There will still be a very thin layer of uncooked egg on top.

7) Add toppings to half of the egg: Corn and cotija, the veggies, grated pepper jack, and a few leaves of fresh cilantro.

9) Cook omelet for another minute, gently flip it with a spatula, folding it over carefully in the pan. Cook for another 30 seconds or so.

10) Slide the omelet into a pan, garnish with cilantro, extra cheese, and hot sauce. Serve immediately!

I have this problem where I always, without fail, roast more corn than I actually need. If I have four people coming over, I will roast six ears of corn even though I know that almost nobody wants two ears of corn.

When I roast corn, I really like it to get a nice char on some of the kernels. To cook it this way, I shuck the ears and rub them with a bit of oil and season them with salt and pepper. Then I toss them on a hot grill or under a hot broiler until they are a bit charred on all the sides.

On the grill this will take around fifteen minutes, but the broiler is usually a bit faster – maybe 12 minutes.

So, like I said, the idea is that you eat these and then in the next few days you can mix up an easy omelet with the leftovers.

There are three different pieces to this Corn Omelet.

The first is a corn and cotija mixture. Basically just cut the kernels off of a few ears of leftover corn and then stir it with some crumbled cotija cheese. I also added a dash of paprika to my corn for a bit of spice.

I also sauteed some veggies to go in the omelet. I diced up half an onion, red pepper, and a whole jalapeno. Then I just cooked them in a drizzle of olive oil over medium heat until they were soft, about five minutes.

You could toss these right in with your corn if you wanted, but I kept mine separate in case some people didn’t want the spicy vegetable mixture.

The third topping is just grated cheese. I used pepper jack cheese, but any cheese that melts nicely will work in my book.

Beginner cooks can be intimidated by the omelet. I remember when I started cooking them I would have visions of perfectly fluffy eggs folded around melted cheese and the perfect amount of filling. What I would end up with would be closer to scrambled eggs with junk in it.

To add to the stress, people can be omelet snobs. There are a bunch of different ways to make omelets and everybody thinks that they know the best way.

Let me be the first to say that the way I made these omelets is not the only way to make omelets. It is a single way to make an omelet that is delicious. If you want to see a million ways to make omelets, go to youtube and search for “making an omelet”. See you in three weeks.

This is a great starter omelet though.

To start, make sure your eggs and milk are whisked together really well. It should be one even texture and color.

You also need a good omelet pan. It needs to be nonstick and I find that eight inches makes for the perfect pan size.

If you don’t have a good omelet pan, try out the griddle omelet maybe?

Add a small dab of butter (about 1/2 a tablespoon) to the pan and put it over medium heat. You don’t want the pan to get too hot or the eggs will burn.

Once the butter is melted, add about 1/2 cup of egg mixture to the pan. As the eggs cook, use a plastic spatula to gently push the eggs to the center so the uncooked eggs flow to the outside. Tilting the pan a bit might help.

After a minute or two, you should be left with a mostly cooked omelet with a very thin layer of uncooked egg on it.

At this point, go ahead and add your toppings to one half of the Corn Omelet. I did a small handful of the corn/cotija mixture, a spoonful of the spicy veggie mixture, and a handful of grated cheese.

I’m a big cilantro fan so I tossed on a few fresh leaves of that also.

Then use  your plastic spatula to gently fold the omelet half over onto the toppings.

If the eggs underneath are super-brown, then your temperature is too high so turn it down before you try omelet number two.

This guy turned out perfect.

Stick the omelet back over the heat and cook it for about a minute on each side. When you flip it, use your spatula to gently lift and flip it toward the end that is folded just so the filling doesn’t fall out.

This extra cooking time will finish cooking the egg on the inside and also melt the cheese.

Once the omelet is done, slide it onto a plate, garnish it with some cheese and cilantro. A dash of hot sauce never hurts also.

Eat this sucker as soon as possible.

The real key to making a solid omelet is to make sure your heat isn’t too high and that you don’t over-stuff it with fillings. Keep those things in mind and you’ll end up with a pretty solid omelet!

Please feel free to leave a comment and link to your favorite omelet-making method. I know there are a million.

Check out these other breakfast recipes! 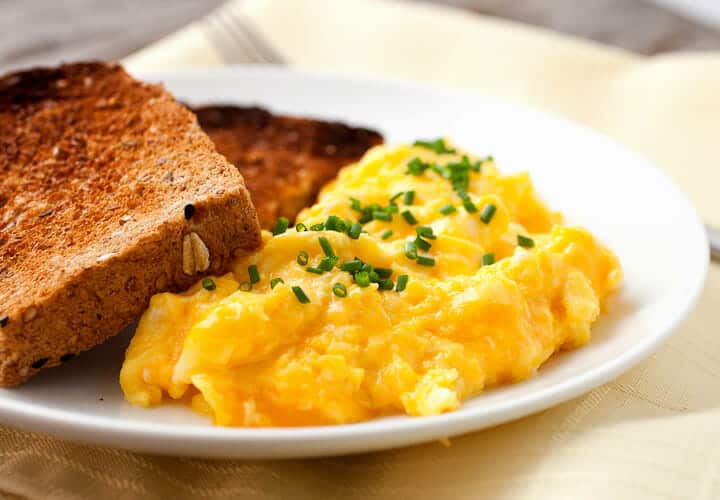 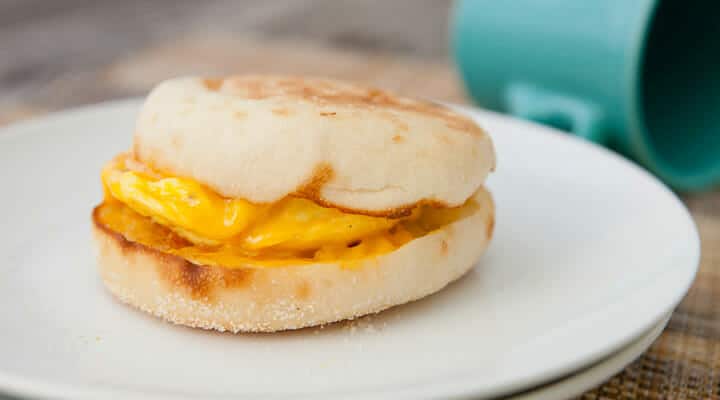 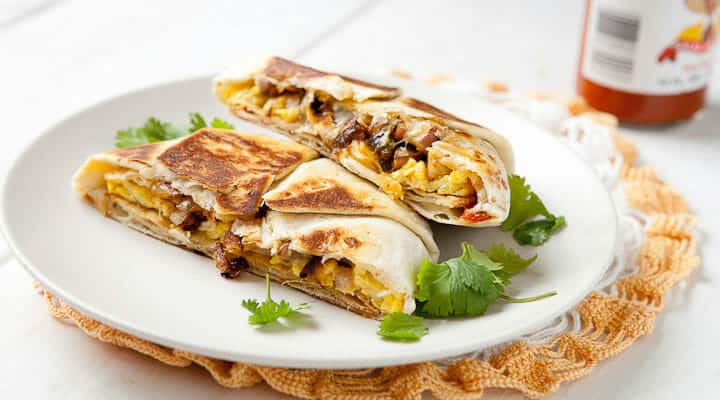