Believe it or not, there are a few downsides of being a food blogger. One of the big ones is that people are intimidated to cook for you. Many times when we are invited places, I get a lot of “Well, I’m sure this isn’t as good as Nick would make…” etc.

Of course, the hidden truth is that I’m freakin ecstatic when someone else offers to cook for me because it gives me the day off! I’ll eat literally anything.

Recently, my Mother-in-Law invited us over for a brunch. I was excited to get out of the house for the day, but wasn’t expecting some elaborate spread because she said she was just making a casserole.

Then she busted out this casserole. It was out of control. We finished the entire dish of it.

My particular version for this post is a bit different out of necessity. I substituted challah bread instead of the called-for croissants. To be honest, I’d probably use croissants if you can find them. The key is to let the casserole sit for a few hours before baking so the flavors can really combine.

As far as breakfast casseroles go, it’s a show stopper.

This is my new favorite breakfast casserole. Easy to mix up the night before with challah bread, sausage, and loads of cheese. It bakes up golden brown and beautiful. YUM.

Adapted from a NY Times recipe.

This casserole doesn’t actually have that many ingredients. It starts by browning some sausage in a skillet with shallot. I used sweet sausage but you could use spicy if you wanted.

While the sausage cooks, toast your challah (or croissants) and then rip them into pieces. Add them to a big bowl with the sausage mixture and any drippings in the skillet.

Then whisk together the wet stuff and combine everything! If you use croissants, I’d use a full 3 cups of milk, but if you use the challah then 2 1/2 should do the trick.

Layer this mixture in a baking dish with grated cheese. I used gouda but Gruyere is also a good option. Whatever you can find.

Now the hard part. Let this sit for at least four hours. Obviously it’s most realistic to just make it the night before and then toss it in the oven in the morning!

It’ll need to bake for about 45 minutes at 350 and should end up puffing up and be golden brown. I just love it so much.

Garnish the Challah Breakfast Casserole with some fresh scallion and serve it up. 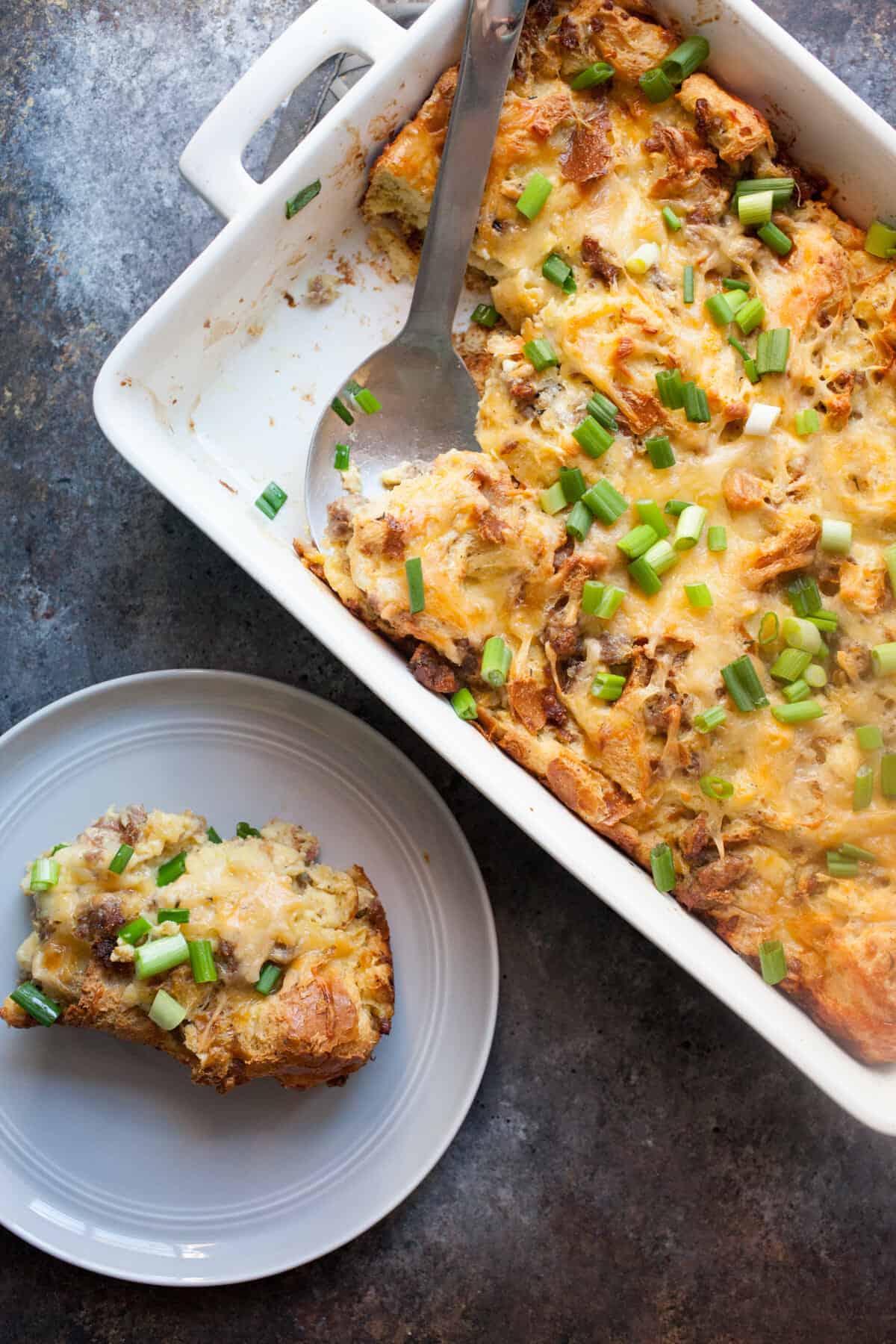