Cantaloupe, you say? Sure… strawberries would work as well or any berry or melon for that matter. In fact, anything you could dip into a chocolate fountain would work fine studded in these pudding pops.

Plus, it’s easy to slice cantaloupe really thin which helps for these pops!

These refreshing and easy fudge pops have a cantaloupe swirl throughout for a fresh melon flavor that pairs great with chocolate!

1) In a medium heavy pot, combine chocolate, sugar, butter, and a pinch of salt over low heat. Stir until melted together. Don’t let the mixture boil.

2) In a separate bowl, sprinkle gelatin over half and half and let sit for 5 minutes, then stir together to combine.

3) When gelatin is combined, slowly whisk into the chocolate mixture. Return to low heat and whisk slowly until mixture is combined. Don’t overheat the mixture. It shouldn’t go above 170 degrees F.

4) Transfer pudding mixture to blender and pulse a few times to combine well.

5) Slice cantaloupe with a very sharp knife. Try to get the slices thin enough that you can see light through them. Press slices into the popsicle molds, trying to keep the cantaloupe to the outer edges of the mold.

6) Pour pudding mixture into molds. Use a stick to make sure no air bubbles form in the mold. Insert popsicle tops or sticks and freeze solid.

7) Run pudding pops under warm water for a few seconds to loosen the pops when ready to eat!

I’m fairly certain that you could make these with instant pudding and it would probably be okay. I found this great homemade pudding recipe though on Chowhound specifically for pudding pops and had to give it a shot.

The base for the pudding is pretty standard. Butter, chocolate, sugar, and a pinch of salt. Mix this on low until it’s melted. Be careful not to burn it!

Then pour the half and half into a bowl and sprinkle the gelatin on top. Let this sit for a few minutes so the gelatin can bloom.

The gelatin is what makes this recipe especially good for frozen treats. It gives it a nice texture and eliminates the ice crystals, making the pudding pop nice and smooth.

Then whisk the half and half mixture into the chocolate mixture. Return it to the heat (LOW heat) and whisk until the mixture is combined.

Very important: Don’t overheat this mixture! Keep the heat down and whisk constantly. Once it is steaming, it’s done. Technically, don’t bring it above 170 degrees F.

When the chocolate mixture is relatively smooth and lightly steaming, remove it from the heat and let it cool slightly. Then transfer it to a blender and blend it until smooth. This will emulsify everything together!

You should only need about half of a cantaloupe for these pops. Just slice the cantaloupe in half and scoop out the seeds and then use a very sharp knife to slice very thin slices. This is about right.

Cut the rind off the melon and kind of work them into the popsicle molds. I had visions of wrapping the cantaloupe around the outer part of the mold so the outside would be all cantaloupe with a pudding interior, but that didn’t really work.

It doesn’t matter though, just get the melon in there!

Then pour in your pudding mixture and use a fork, knife, or stick to work out any air bubbles in the mold. Cap the popsicles off (or insert wooden sticks if you’re using those) and freeze until solid!

Run the pudding pops under warm water very quickly to loosen them.

Talk about a good way to forget a hot August day!

The chocolate pudding has a really nice texture, silky smooth. And then there are these pockets of crisp and light cantaloupe.

I loved how these cantaloupe pudding pops turned out!

Give them a shot if you’re a frozen dessert fan! 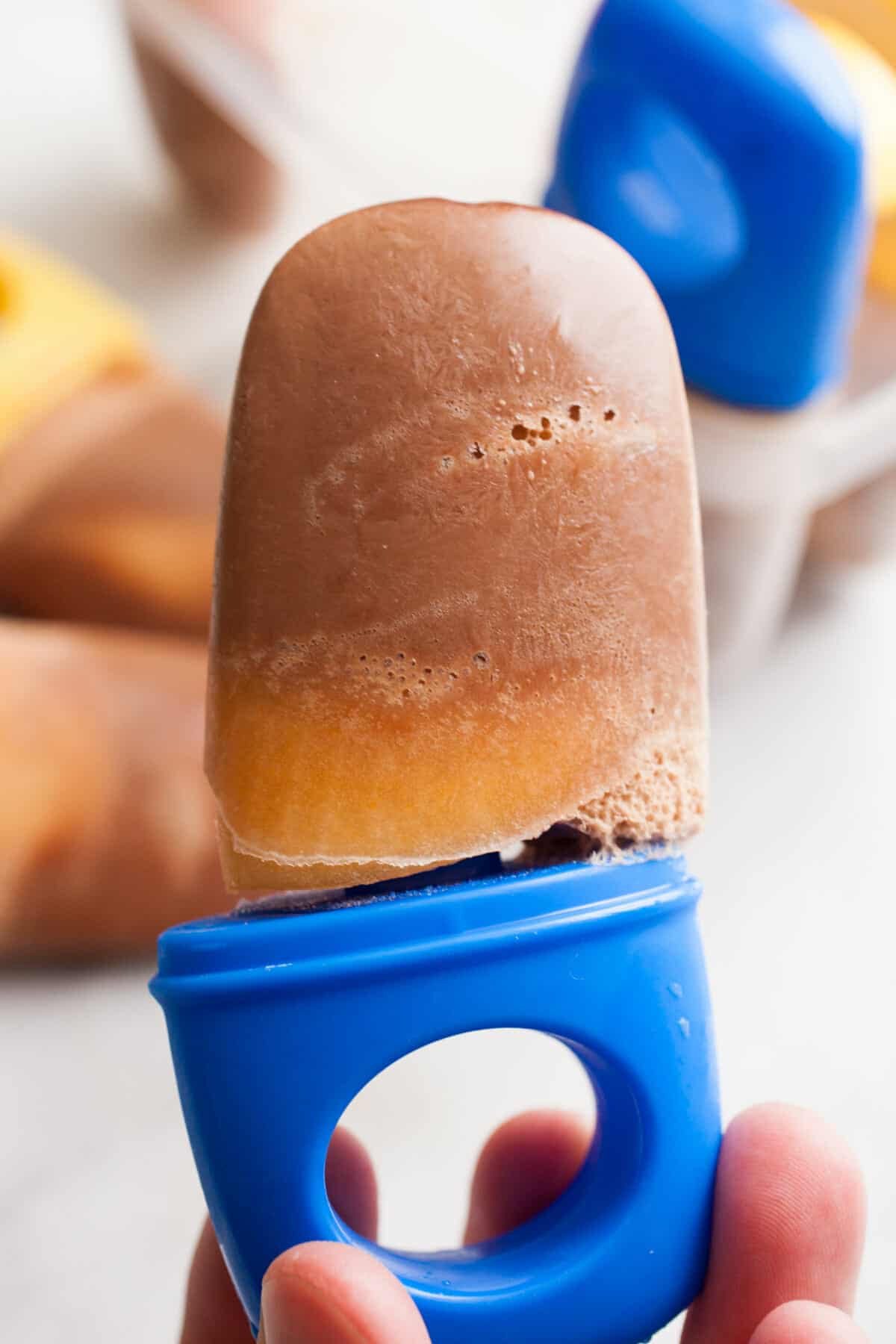