Did you all think I was going to let the big football game this weekend just roll by without posting a good game recipe?

From my experience, in most games the game is almost always over-hyped (except last year). The commercials are usually okay, but also over-hyped. But the food. The food is never over-hyped. It’s always good. Cheesy things. Saucy things. Meaty things. You really can’t go wrong with the food during the game.

This recipe is something I’ve been working on for a few weeks now (hard work). It combines some traditional buffalo flavors like Blue Cheese and hot sauce on a nicely toasted french bread which is easy to slice up and pass around!

Just as a warning, I wouldn’t exactly call it healthy, but seriously. It’s a once a year thing. If there was ever a day to let the old belt out a notch, it’s on game day.

A quick and easy toasted bread that packed on traditional buffalo flavors: Hot sauce and blue cheese. Great for a party!

I typically really don’t like mayonnaise, but there’s just nothing else that can give the right texture to this dish. I think you could substitute the light stuff if you want, but it’s pretty essential in my opinion.

This recipe only takes a few minutes to throw together. Just mix the mayo, sour cream, butter, scallions, and garlic in a medium bowl. Mush up the butter really well so it’s not all in one big chunk. Since we’re going to be spreading this on bread, you want to make sure it’s an even mixture.

After it’s all mixed together, grate the mozzarella and toss that into the mix also.

This is pretty serious stuff.

Bread choice is pretty important for this recipe. I went with a big French loaf which is nice and airy, toasts nicely, and will hold up to lots of toppings.

I recommend a good french bread loaf, but I guess you could slather this stuff on all kinds of different breads. 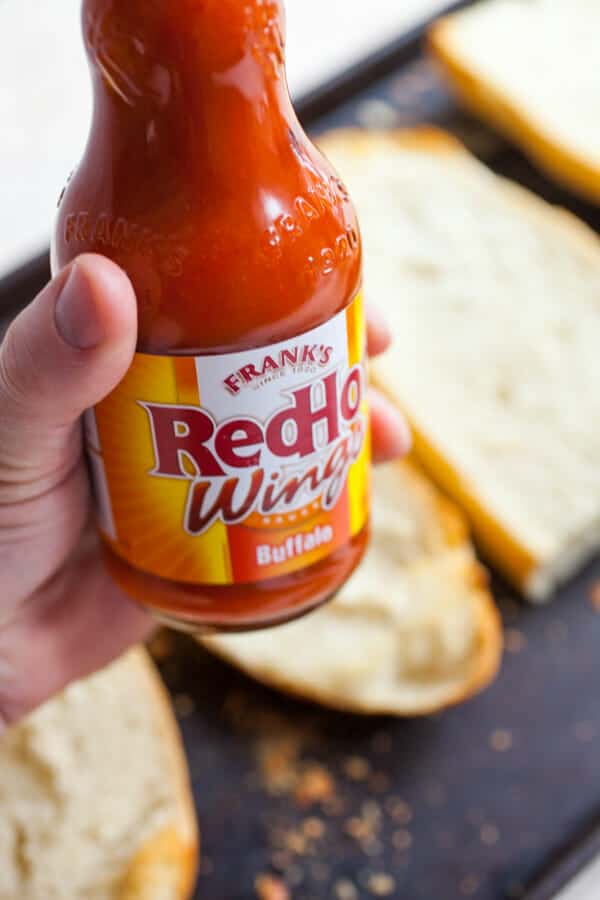 The Most Important Part

The key part of this recipe is to toast the bread before you put on toppings. You don’t need to toast it for long, but you want to make sure that it has crisped up a bit on the top and bottom.

I cut my loaf down the middle and then toasted them at 425 degrees for about 5 minutes.

Don’t forget this or your final bread will be kind of soggy which isn’t good at all.

Once your bread is done toasting, turn on your broiler on high to heat up. That’s how you finish the bread.

Then take your hot sauce and spread it all over the bread surface. You want the bread pretty much covered in hot sauce. Frank’s is the perfect hot sauce for this. I don’t recommend anything else. 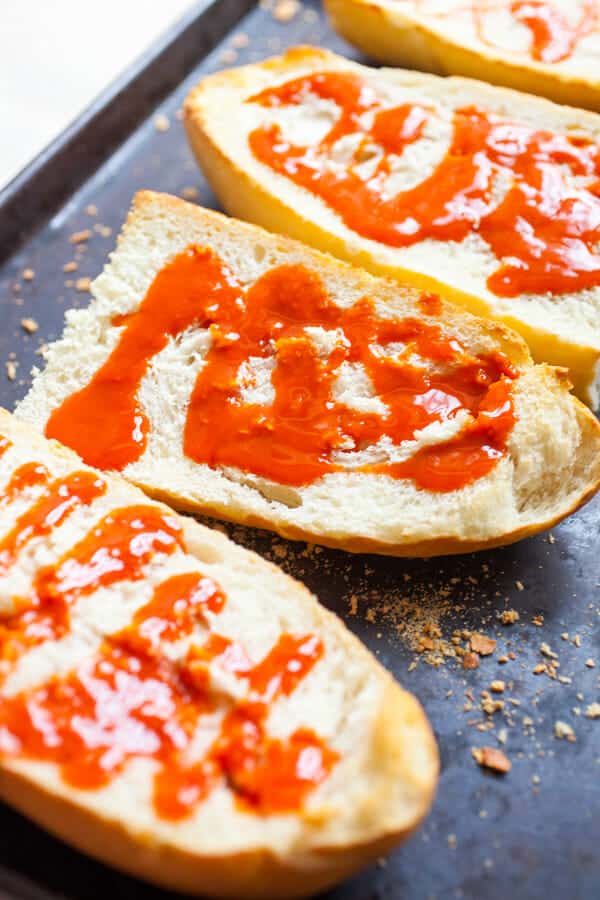 Then take your topping mixture and spread it evenly over the bread.

The key thing here is to not over fill the bread. Don’t worry about using all the filling, you might have some leftover. Just make sure there’s a nice even layer over the bread. It’s a pretty rich layer so no need to pile it super high. 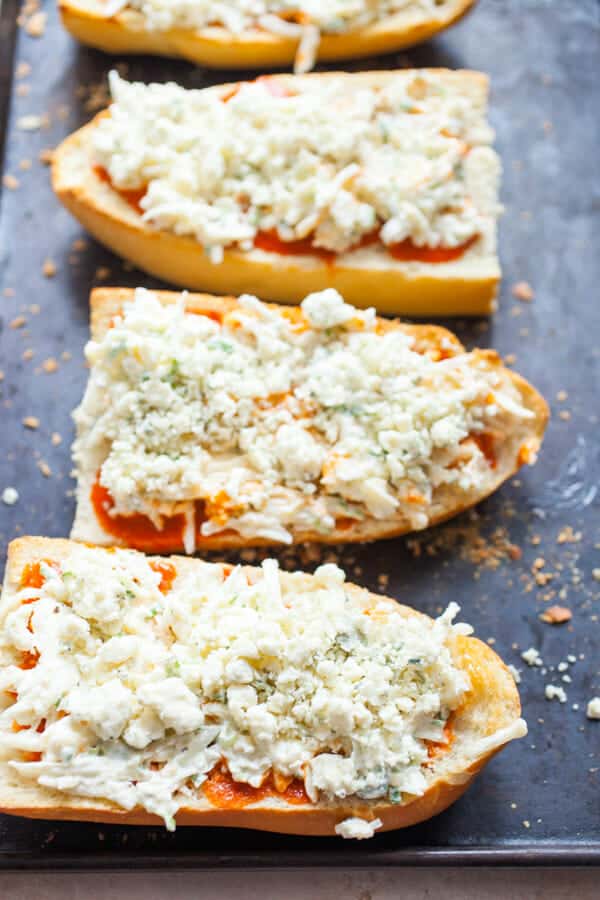 As a final touch, and the thing that makes this all really buffalo is to sprinkle on some blue cheese right on top.

Again, no need to over do it.

To finish this guy off, BROIL the bread on high for about 2-3 minutes until the cheese is just starting to brown and the edges on the bread are good and toasted.

Once it comes out of the broiler, let it rest for a minute and then slice it up into sticks which makes it easier to serve.

One or two of these bad boys is an awesome snack. They are spicy and cheesy and crunchy and just pretty amazing. Whether you’re an Eagles fan or a Patriots fan, you’ll make friends with this stuff.

If I had to pick a winner, you better believe I wouldn’t bet again Mr. Brady. 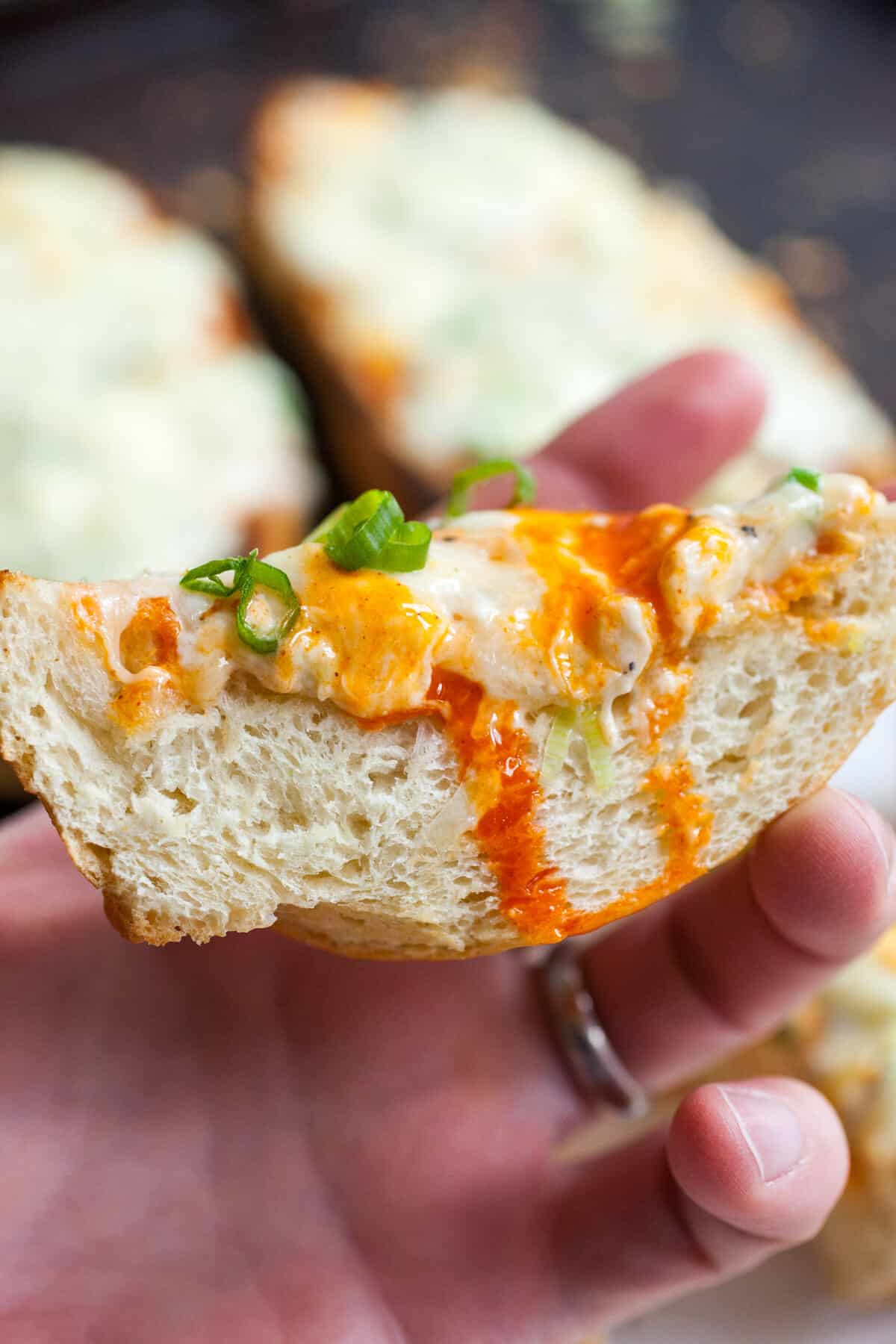