One of my favorite sandwiches in the summer is a simple BLT on toast. For it to really work though, it helps to have great, summer tomatoes. I tend to skip the sandwich in the winter months because the tomatoes just aren’t available.

Betsy was craving a hearty wrap for lunches recently though and so I came up with this twist on the BLT that works surprisingly well, even in winter months. The trick is to use cherry tomatoes which are pretty decent even in cold months and make a little salad out of them that gets piled on the wrap.

The BALT Wrap is a twist on my favorite sandwich (BLT). Including perfectly crispy bacon and a light and fresh tomato chive salad!

1) Lay out bacon on a baking sheet lined with foil (or on a wire rack) and bake at 375 degrees F. until bacon is crispy, 15-20 minutes depending on thickness.

2) Meanwhile, Chop tomatoes and stir together with olive oil, chives, and season with salt and pepper. Set aside.

3) Mash together avocado and mayo.

4) When bacon is crispy, remove and blot off grease with a paper towel.

5) Cover a wrap with a damp paper towel and microwave for 20 seconds. Then spread some of the avocado mayo on the wrap. Top with two slices of bacon and big scoops of the tomato mixture and diced lettuce. Roll wrap tightly. Cut wrap in half if you want for easier eating.

Most days I like to use my favorite method for making bacon which requires a wire rack. Baking the bacon on a rack allows the fat to drain off as it bakes, making it really crispy.

I get a lot of emails that this works but people complain about the clean-up. I tried a different method for this bacon and just lined a baking sheet well with heavy-duty foil. I laid out the bacon in strips and baked it at 375 degree F.

The result was equally crispy bacon but it was greasier for obvious reasons. If you use this method, I recommend blotting the bacon with a few paper towels after you remove it from the pan because it’s really too greasy at this point to use in a wrap.

It does get crispy though and the cleanup is much easier. After the sheet cools you can just fold up and throw away the foil (or save the bacon fat for cooking later).

Instead of slicing up big, juicy tomatoes for these wraps, I just snagged a pint of cherry tomatoes which are available and decent pretty much year around these days. Dice up the tomatoes and stir them with some olive oil and a big heap of fresh chives. Season with salt and pepper and this is a great addition to the wraps.

That’s avocado, obviously. If you’re going for a healthier wrap, you can absolutely just mash up the ‘cado and use it on the wrap, but I really like a little smear of mayo on my BLTs so I mashed the ‘cado with a small amount of mayo. No need to overdue it but it ups the creaminess nicely.

One big avocado and 1-2 tablespoons of mayo is all you need.

If you’ve ever been impressed by a good deli that can stuff a seemingly impossible amount of stuff in a wrap, there’s a trick to it. You won’t be able to get the tortilla flexible enough if you just pull it out of the fridge. A cold tortilla will tear all over the place.

The trick is to steam the tortilla to loosen it up a bit. The easiest way to do this at home is to wrap the tortilla in a damp paper towel and microwave it for 20 seconds on high! The damp tortilla will steam almost instantly and you’ll end up with a really flexible wrap.

Building the wrap is pretty straightforward. Smear on some avocado spread, top with lettuce, bacon, and big scoops of the tomato salad. Then wrap it up!

It’s a simple wrap, but the flavors are great.

BALT it up, people! 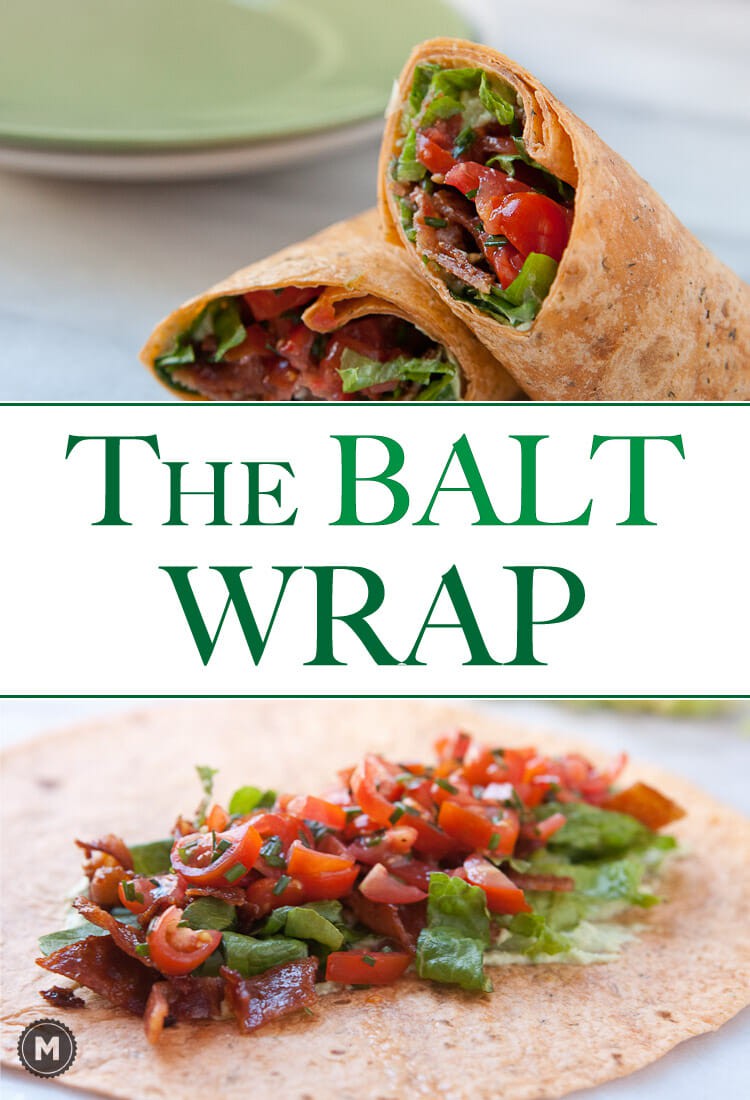