I know. You’re sick of pumpkin recipes this year. Join the club. But, I wanted to throw you a pumpkin curveball with a recipe that uses pumpkin in a savory way instead of all the sweet stuff you’ve probably been seeing. That’s why these Bacon Pumpkin Stuffed Shells need to be on your dinner table this week.

Nothing says fall to me like a big bubbling, cheesy baked pasta dish and this one has surprisingly few ingredients, but also really great flavors. The combo of slightly sweet pumpkin puree with crispy bacon and creamy gouda cheese is pretty hard to beat.

Stuff those shells, people. Bring pumpkin into the savory universe!

About as fall as a pasta dish gets. Crispy bacon and creamy Gouda and pumpkin all in a baked pasta!

To start this dish, you need to crisp up some bacon. I recommend chopping the bacon and adding to a large skillet over medium-low heat. This will slowly render out the fat and leave you with perfect crispy bacon bits.

Remove the bacon from the skillet and leave enough bacon grease to measure about 2 tablespoons (you can eyeball it).

Then add the onion, garlic, and paprika. A pinch of salt and pepper wouldn’t hurt here also.

Cook those until the onion is soft and translucent. Then add in the pumpkin puree and half of the bacon. Be sure to just buy pumpkin puree, not pumpkin pie mix!

Stir that all together on your stove. Once the flavors are combined, remove it from the heat and stir in half of the cheese.

Cook the shells according to the package, but be sure to not overcook them. They are almost impossible to stuff if they are overcooked and soggy.

Then work with one shell at a time and stuff them with a big spoonful of the pumpkin filling. Line them up in a baking dish as you stuff them.

Bake these at 350 degrees F. for about 20-25 minutes until the center is hot and the cheese is bubbling and melted.

Garnish the shells with some chopped chives and you’re ready to eat!

These bacon pumpkin stuffed shells have some great flavors going on. If you’re a pumpkin fan, or a baked pasta fan, give them a shot! 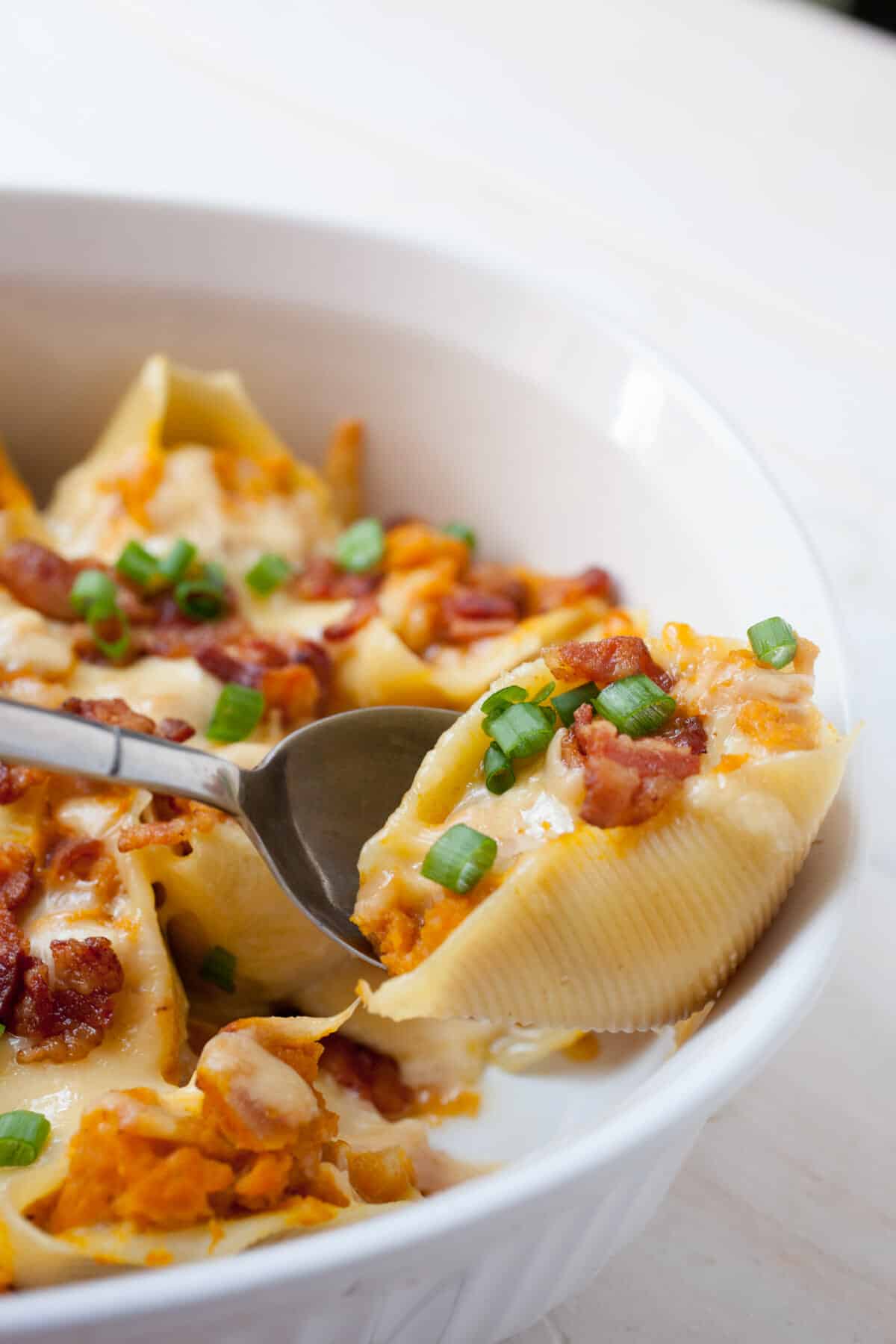