I usually think of oatmeal as a sweet breakfast. I like it with a little butter, some brown sugar, and maybe a dollop of peanut butter. But oatmeal is basically a sponge for flavor. It’s kind of bland on its own, but is great at soaking up other flavors, which is why this Cheesy Bacon Savory Oatmeal works so well!

Almost like an Asian congee bowl, this savory oatmeal is simmered with some onion and just a little bacon grease. The finished bowl is packed with umami savory notes.

It’s my new favorite weekend breakfast. Trust me when I say that these savory oats will jump way up your breakfast list once you try them!

The perfect change for the savory breakfast lover. This oatmeal is served with crispy bacon, gooey cheese, and fresh chives!

How to Make Savory Oatmeal Video

These bacon oats are pretty quick to make (it’s fine to use rolled oats instead of steel cut). The key is to build some layers of flavor.

The first layer is bacon! Start with thick bacon and chop it up and place it in a cold pot. You’ll cook everything except the egg in this one pot.

Cook the bacon over low heat for 10 minutes or so until the fat has rendered out of the bacon. Remove the crispy bacon bits.

Drain off most of the bacon fat, but leave about a tablespoon of it. You can eyeball it.

Then add the diced onion to the pan. Don’t overdo it on the onion. A little goes a long way.

As the onion cooks, it’ll release some water and use that to scrape up any bits stuck to the pan.

Time for the oats!

Actually cook the oats in the bacon grease for a few seconds like you would a risotto. The pan will look really dry.

Then add the water and bring the pot to a simmer. Turn the heat down to low and let the oatmeal simmer for 8-10 minutes until it’s nice and thick. If it gets too thick, add more water, but 2 cups should be about right.

Season the cooked oatmeal with a little salt and pepper.

I like to add the cheese in two installments. Serve some right on top of the finished oatmeal, but stir some into the oatmeal while it’s cooking.

You don’t need to serve these bowls with an egg, but it really rounds out the bowl in my opinion. I recommend just cooking the over-easy. The soft egg kind of melts into the oatmeal bowl. Good stuff.

Divide the savory oatmeal between two bowls and top with some more cheese, crispy bacon, the egg, and some fresh chives.

This is home comfort food at its best.

Have you ever tried savory oatmeal?? I imagine the topping ideas are endless. Leave a comment! 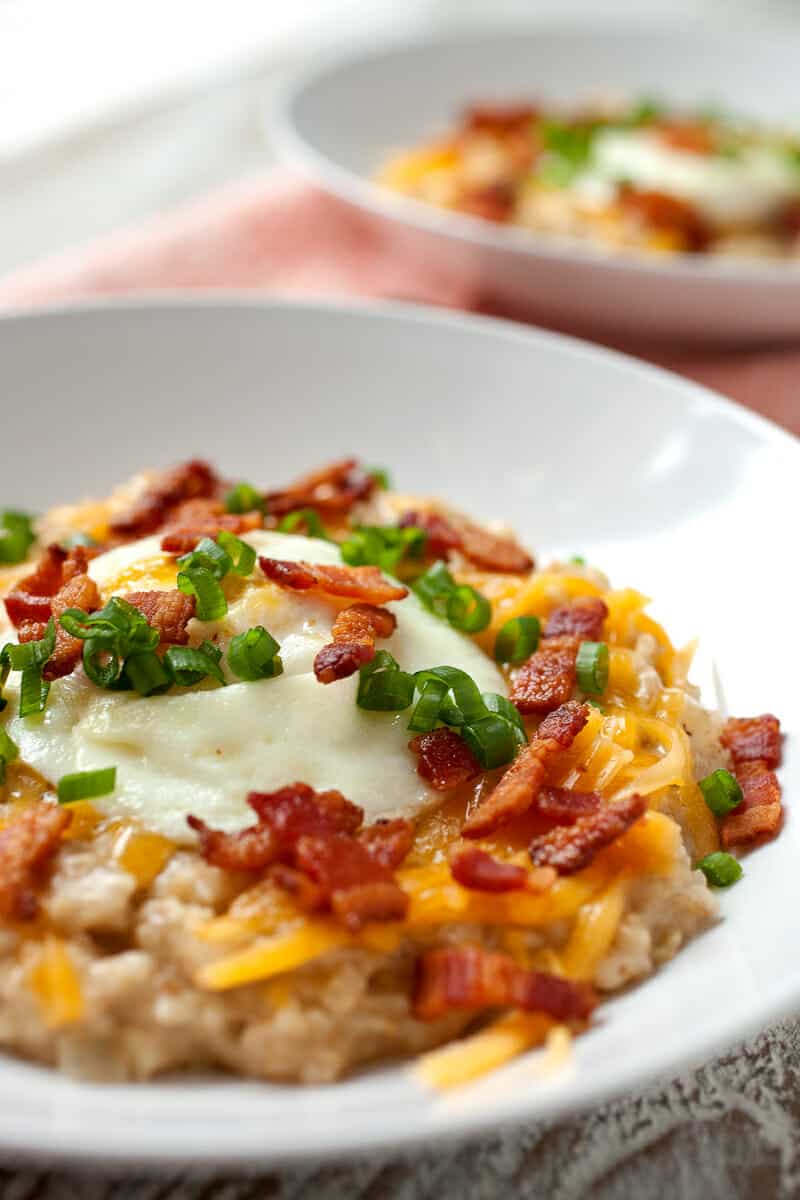 Here are a few other great savory breakfasts!