Someone can disagree with me if they so choose, but I’m fairly certain that French sauces are the most intimidating thing in the cooking universe. They sound complicated. They look difficult. They taste delicious and therefore must be difficult.

Plus, unless you go to culinary school it’s damn hard to get someone to actually explain how to make it correctly.

Since I am officially ONE for ONE in the bearnaise world (Bearnaising .1000), I will take a stab at explaining how I made it. I was really happy how it turned out and found myself tasting it and re-tasting it not to change the flavors but just to eat as much of it as possible.

Then I drowned some spicy roasted asparagus with the sauce and ate all of it , and let me tell you, this Asparagus Bearnaise is good stuff!

Spicy Roasted asparagus covered with a classic homemade French Bearnaise sauce. This is the perfect spring side dish!

For the Asparagus:
1) Snap off hard ends of asparagus and toss with olive oil, salt, pepper, and red pepper flakes.
2) Lay out asparagus on a baking sheet and bake at 400 degrees Fahrenheit for 10-12 minutes until they are bright green, slightly crunchy still, but cooked through. Keep warm until serving.

For the Bearnaise sauce:
1) Combine vinegar, 2 tablespoons fresh minced tarragon, shallot, and crushed peppercorns in a small saucepan. heat over medium heat until the mixture reduces by half.

2) In a medium mixing bowl, whisk together water, lemon juice, and salt. Strain in the vinegar mixture and use a spatula to press the liquid through the mesh strainer.

3) Whisk yolks into the mixture. Place yolk mixture over a double boiler (I just use a small pan with simmering water). Whisk the yolks constantly as they heat until the yolks are doubled in size and foaming. Be careful not to cook the eggs!

4) Once the yolks are foaming, start whisking in melted butter. Start with just a drop or two of butter and whisk it in. Once the emulsion starts to hold, you can whisk in the rest of the butter in a steady stream though. If it looks really thick at any point, whisk in a teaspoon of cold water.

Once the sauce is made, serve immediately or store the sauce with some plastic wrap on the surface for up to an hour or two.

Serve asparagus with the bearnaise sauce.

Before we talk about the sauce, let’s talk about the ‘gus. For this Asparagus Bearnaise recipe, I just roasted it very simply with a few spices and seasoning. If you don’t cook with asparagus a lot, the trick to cleaning it is to hold the larger end in your hand and press on it with your thumb. The asparagus will naturally snap where hard part meets the soft part.

If you are in a hurry, you could probably just chop off the bottom 2 inches of all of the asparagus and get close.  I like the snap method though.

Once you have your asparagus cleaned and snapped, just toss them with some olive oil, salt, pepper, and red pepper flakes. Then toss them all on a baking sheet.

Bake these guys at 400 degrees F for about 12 minutes until they are bright green, slightly soft, but still have some crunch to them. They shouldn’t be completely soggy.

If you’re good, it should almost take the same amount of time to roast the asparagus as make the sauce, but if it’s your first time, the sauce will take you more time. At least, it took me more time…

Keep the asparagus warm in the oven (but turn off the heat) until the sauce is done.

If you’ve ever made a hollandaise sauce for eggs benedict, then this will look very familiar. It’s essentially the same technique but has some extra flavors in it, most importantly tarragon.

Start the recipe by adding the vinegar, shallot, crushed peppercorn, and 2 tablespoons of the tarragon to a small saucepan.

Two notes right off the bat:

1) I forgot the tarragon in this step. Don’t you do the same.

2) Traditionally, you should use half vinegar and half white wine for this recipe but I used all vinegar because it’s what I had. It still tasted delicious. Also, I’m not sure that apple cider vinegar is the traditional choice, but whatever.

French chefs are hating me right now and I haven’t even started the sauce.

Put this saucepan over medium heat and let it cook down until it reduces by half. All of the flavors will be concentrated in a very tiny amount of liquid.

In a medium mixing bowl, whisk together the lemon juice, water, and salt and then strain this vinegar mixture into that liquid. Use a spatula to really press the liquid out of the shallots.  You don’t want to actually add the shallots to the sauce though. That would be way too much onion flavor.

From here on out, it is basically like a hollandaise sauce!  Melt the butter in a microwave (no need to clarify it) and whisk the egg yolks into the vinegar/water mixture.

Then place the yolks over a double boiler (I just use a small pot with simmering water) and whisk like crazy. As the yolks heat and combine with the water, they will start to foam and basically double in size. When this happens, it’s time to start adding the melted butter.

Note: Don’t do other stuff during this process. It’s very easy to over-cook the eggs. If they harden because they get too hot, you basically have to start over.

When you start adding the butter, add it just a few drops at a time to start.

As you whisk in the drops of butter, the sauce should start to turn smooth and silky. After a few rounds of drops of butter, you can start to whisk the butter in using a thin stream. Don’t just dump it in, but pour it in slowly as you whisk furiously. If you’re fast, you can do this while the yolks are over the double boiler, but frankly, I like to take mine off so I can just focus on the whisking. It’s important to return it briefly to the heat source as you whisk though.

After all the butter is incorporated, whisk in fresh tarragon. I could’ve used more I think.

Your sauce is done!

You should use it immediately or cover it with some plastic wrap on the surface of the sauce. It’ll keep okay for an hour or two, but won’t keep much longer than that. I’ve heard that it’s possible to store and reheat the sauce, but I’ve never tried it and I have my doubts that the sauce would be as good on day two.

What Can Go Wrong?

1) You over cook the eggs. You’re screwed. Start over.

2) The sauce is too thick. This can happen if you don’t have enough water in the sauce. As you whisk the butter in, it will turn very thick (think mayonnaise). If this happens, whisk in a teaspoon of cold water and it should normalize.

3) The sauce breaks. If the butter separates out and it looks gross, don’t fret. It will look like a disaster but is actually salvageable. Just whisk together a fresh yolk and a tablespoon of water in a separate bowl. Then slowly whisk the broken sauce into the fresh yolk over the heat source. It should blend perfectly. (This happens to me like 20% of the time when I make hollandaise and this is how I fix it.) 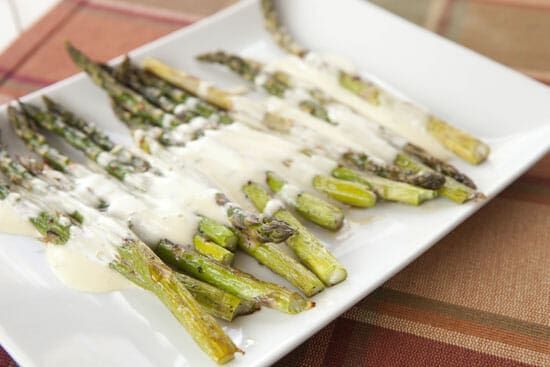 For my first Bearnaise, I really thought it turned out great. If I’m being very critical, it was maybe a tiny bit on the thin side, but held well and had great flavor. It was awesome with the asparagus.

One extra note: This bearnaise recipe makes more than you’ll need for the asparagus alone. Maybe make a steak for the extra? It’s kind of a hard recipe to half honestly, so I would just make a few extra things you can slather in the sauce.

Is anybody a homemade Bearnaise fan or expert? Leave a comment!