This post is sponsored by Land O’Lakes, Inc. Check out their full line of products including the Land O Lakes® Cinnamon Sugar Butter Spread I used for this Apple & Brie Grilled Cheese recipe. Be sure to follow them on Facebook and Instagram for more great recipes!

Believe it or not, it’s almost fall. It might not feel like fall, but it’s just around the corner and I can’t wait. Besides ripe tomatoes and peaches, there isn’t a ton I love about late summer. I’m ready for cooler temperatures, the holidays, and fall recipes.

Apples are a big part of fall for most people. We don’t really have an apple-picking culture in Colorado, but I remember it from when Betsy and I lived in DC and I still sort of miss it. Bringing home more apples than you could ever conceivably eat was about as Americana as it gets.

This Apple & Brie Grilled Cheese is the perfect intro to fall and to apple season. The trick to making it work is to bake the apples with a little sugar and cinnamon first, basically creating a pie filling without the pie. Then add those to sturdy bread with a thick layer of brie.

Brie works well with grilled cheese, but you have to be careful not to cook it too long or the brie will actually get too melty if you can imagine such a thing. But a sturdy sourdough bread will allow just enough heat to get through while getting toasted with a layer of Land O Lakes® Cinnamon Sugar Butter Spread.

I don’t think I need to tell you how well all these flavors go together.  Raise your hand if you’re ready for fall!

A quick and simple sandwich that is just in time for apple season! You could use many cheeses, but brie is my favorite!

1) Preheat oven to 400 degrees F. In a small baking dish, stir together cubed apple, sugar, and cinnamon. Bake for 20 minutes until apples are soft.

2) Prepare brie by slicing off rind and cutting into slices.

4) Place a sturdy skillet over medium-low heat. Place bread in the skillet, butter side down. Top with brie and half of the apple mixture. Then top with second piece of bread.

5) Cook sandwiches for 3-4 minutes per side, being careful not to burn the bread, until brie is melted and bread is browned and toasted.

If you try to just stick apples in a grilled cheese, it’ll work okay but the apples will be crispy. Sometimes this can be nice if they are sliced thin, but for this sandwich I like to roast the apples toss with some cinnamon and sugar to create a pie filling.

Then you use those baked apples in your grilled cheese!

Spread the Land O Lakes® Cinnamon Sugar Butter Spread on two pieces of sturdy sourdough bread and place them in a skillet over medium heat. Add the brie and the apples! I recommend slicing the rind off the brie before using it.

Assuming you don’t do that though, you’re left with a real treat of a grilled cheese sandwich. 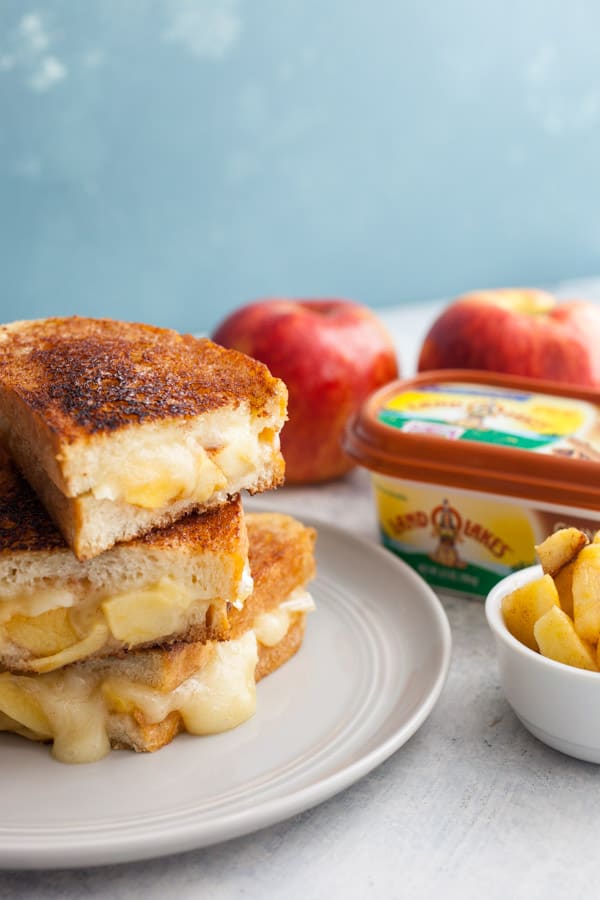 Look at that gooey deliciousness!

3 Responses to “Apple and Brie Grilled Cheese” Leave a comment