This is very important: Not everything I cook turns out great. Sometimes I light things on fire, sometimes I struggle making eggs, and sometimes I make the worst sandwich in the history of sandwiches.

But sometimes I think it’s important to give you a glimpse into my kitchen when things go wrong for me. Quite frankly, I fail a lot at cooking. It doesn’t even bother me anymore. I just do my best to make a meal out of the failure and then move on to the next day.

If you are going to tackle cooking as a hobby, it’s pretty inevitable that you will fail at some dish. Just know that you are in good company!

I really thought the recipe I was working with was pretty fail proof. It had some delicious ingredients and I planned to make one heck of a good orzo salad from it. If you want the original recipe (which I don’t recommend actually following for reasons I’ll discuss), you can check it out here.

The recipe had some of my favorite ingredients: pancetta, shallots, peas, and dill all mixed in with orzo pasta. It seemed like it would be a fantastic dinner or lunch salad.

What could go wrong?! 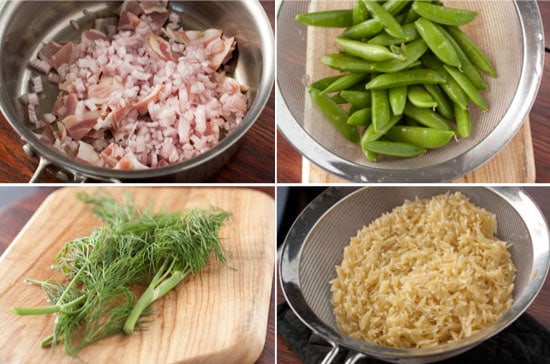 There were a few things that I found wrong with this recipe. Now, I’m enough of an experienced cook at this point that I probably should’ve realized all of these mistakes before starting and adjusted the recipe, but I just followed it blindly.

There are some ingredients that just need to be crispy to really make a recipe work. Pancetta is one of those things. The goal should almost always be to brown it, crisp it, and keep it crisp.

The way to do it right would’ve been to remove the pancetta after it was browned and add it back in at the end of the recipe.

I hate it when vegetables are overcooked. This mess up was solidly on me. The original recipe used normal peas, but I wanted to substitute snap peas. The problem is that snap peas are perfect after just 1-2 minutes of blanching or steaming. They don’t need to cook for 5 minutes in chicken broth.

That’s what I did and I turned a great summer vegetable into mush.

Over Doing The Dill

Ok. This one is on the recipe, but I should’ve noticed it. The recipe calls for 5 tablespoons of fresh dill (one of which is just for garnish).

That’s a lot of dill.

I stupidly just tossed in a quarter cup of dill rather than adding some and tasting it, breaking the rule that you can always add more.

As soon as I added it all to the pot I thought to myself, “That was a horrible idea.”

The final dish really only tasted like dill. You couldn’t make out any other flavor really.

The Moment of Realization

If you’ve ever failed at a recipe, you know that there is always a moment when you realize that things just aren’t going well.

For me, this was my moment:

A big pot of what used to be crispy pancetta that is now water-logged, snap peas that are quickly turning to mush, and crazy amounts of dill.

There’s really only one thing you can do when you fail at a dish: Laugh it off.

Don’t try to justify it or come up with ways that it might be good. If it sucks, it sucks. Move on!

In this case, Betsy and I ate some of it, mutually agreed that it was horrible, and then made nachos.

The important thing to remember is that every cook that has ever lived has made bad dishes. It doesn’t mean you shouldn’t cook, that you suck at cooking, or that cooking is hard.

Once you cook more, and fail a lot, you’ll become really good at shrugging off failures and you’ll become even better at fixing them.

I have full confidence that this salad would be delicious if I A) Browned pancetta and removed it B) Blanched peas and added them at the end C) Cut way down on the dill.

So, the next time you have a recipe failure, don’t beat yourself up over it.

If you do have a recent recipe fail, feel free to share it in the comments!

19 Responses to “When Orzo Goes Wrong” Leave a comment