This post is sponsored by Land O’Lakes. Check out their full line of products including the Land O Lakes® Butter with Canola Oil I used for this Weeknight Chicken Biryani! Be sure to follow them on Facebook and Instagram for more great recipes!

Chicken Biryani is one of my favorite meals to order for take-out. The combination of seasoned rice and chicken, simmered in a flavorful broth, is common in a lot of cultures but I particularly like this version.

Traditionally, Chicken Biryani has saffron in it, and you can absolutely add it to this version if you happen to have some, but I wanted to make a slightly more approachable version for easier weeknight cooking. Instead, the signature color in my version comes from a good amount of turmeric on the chicken and also curry paste!

This dish becomes doable, even on a weeknight, especially if you prepared some things in advance like seasoning the chicken and cooking the onion, which you could do well in advance. Then, just sear the chicken and simmer with the rice and add-ins! Done!

My family absolutely loved this simple Chicken Biryani dish and even my kiddos ate big portions of it. They did think it was weird that the rice had raisins in it and avoided those, but hey… more for me!

This simple chicken biryani has deep flavors and is one of my favorite chicken and rice skillet meals. Spiced with cardamom, turmeric, and cinnamon, the chicken is tender and rice is fluffy and flavorful. A complete meal in one skillet!

1) Stir rice into a bowl of cold water and let soak for 15 minutes. Then drain and rinse the rice a few times with cold water. Set aside.

2) Rub chicken thighs with turmeric and salt and set aside.

3) Whisk together chicken stock and curry paste and set aside.

5) Remove onion mixture from skillet. Add another tablespoon of Butter with Canola Oil. Add chicken thighs in a single layer and cook for 4 minutes per side so they are seared.

6) After chicken is seared, sprinkle onion mixture over chicken thighs. Then add soaked rice and golden raisins. Pour in stock mixture and use a spoon to make sure the ingredients are evenly distributed. Bring mixture to a simmer, turn heat down to low, cover and simmer for 6 minutes.

8) When the rice is al dente and just cooked through, but still has a tiny bite to it, remove biryani skillet from the heat. Cover skillet and let it steam off the heat for 5 minutes.

9) Remove bay leaves and cardamom pods from the skillet and garnish with cilantro. Serve Chicken Biryani while warm.

I kept the chicken spices simple for this version because this recipe is all about building flavors. So I just added some turmeric and salt to my chicken thighs.

Meanwhile, add the onions, ginger, garlic, bay leaves, cardamom to a large skillet. Ultimately, everything will be in this skillet so be sure it’s large enough to hold everything! 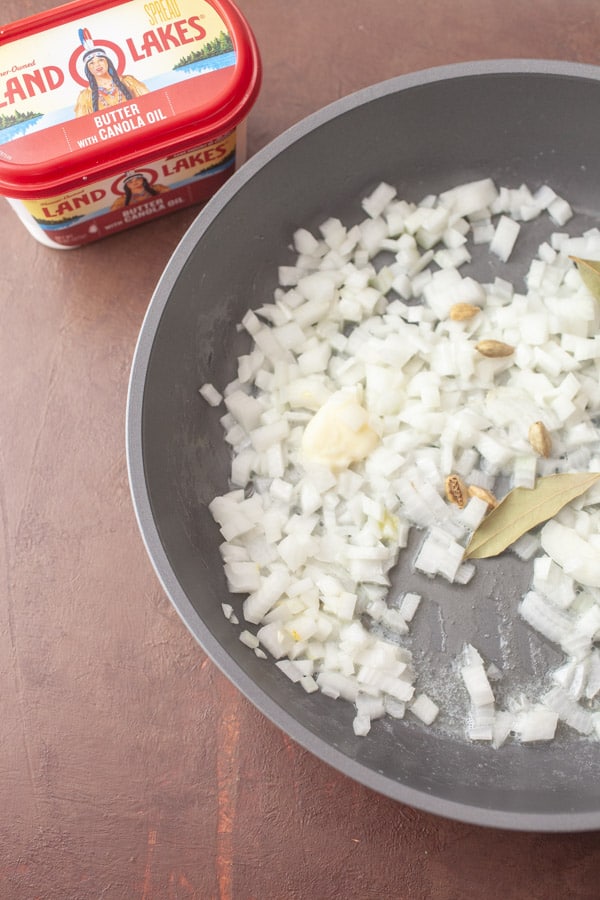 Cook the onions until they start to caramelize a bit, but not a full caramelization. Really, this should cook for about five minutes over medium heat and they will be done.

Remove the onions, add a little more Butter with Canola Oil, and then brown your chicken thighs. No worries about cooking them through at this point. Just get some color on them!

After the chicken thighs have browned slightly, add in the onions, soaked rice, and raisins. The raisins are awesome in the dish. Don’t leave them out unless you just have to!

Pour in the chicken stock whisked with curry paste. The curry paste gives the stock some deep flavor and mimics the classic color you would get in this dish from saffron without the cost of saffron!

Bring the skillet to a simmer and then turn the heat down to low. Cover the skillet and let it simmer for about five minutes. After that it’s worth testing the rice by stirring the dish and seeing if the rice is still crunchy. If it is, then simmer it for a few more minutes and continue to test.

After no more than 10 minutes, the rice should be al dente, meaning it has a small bite to it. 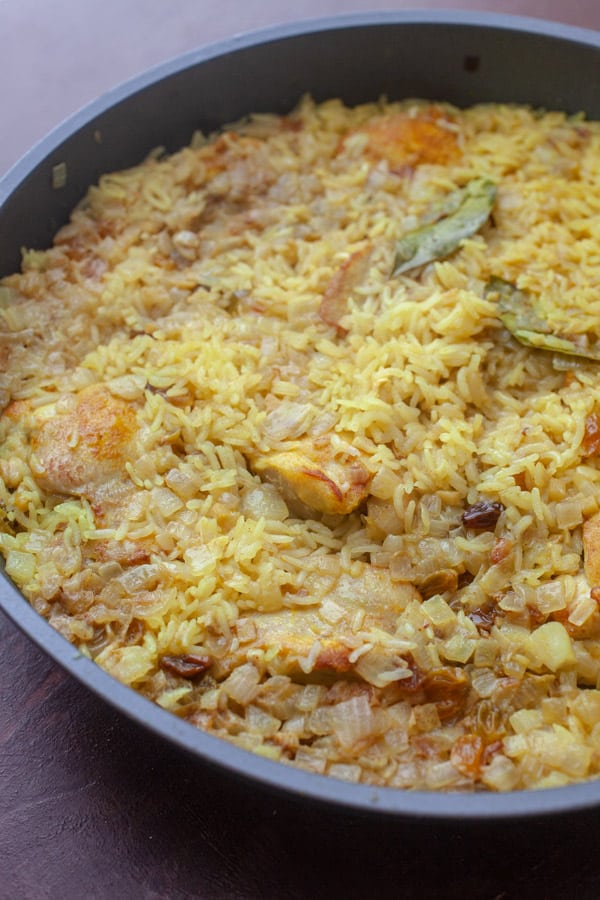 When the rice is al dente and most of the liquid has cooked off, then remove the skillet from the heat. Cover the skillet and let the biryani steam for five minutes. Then fluff it with a fork and it’s done! 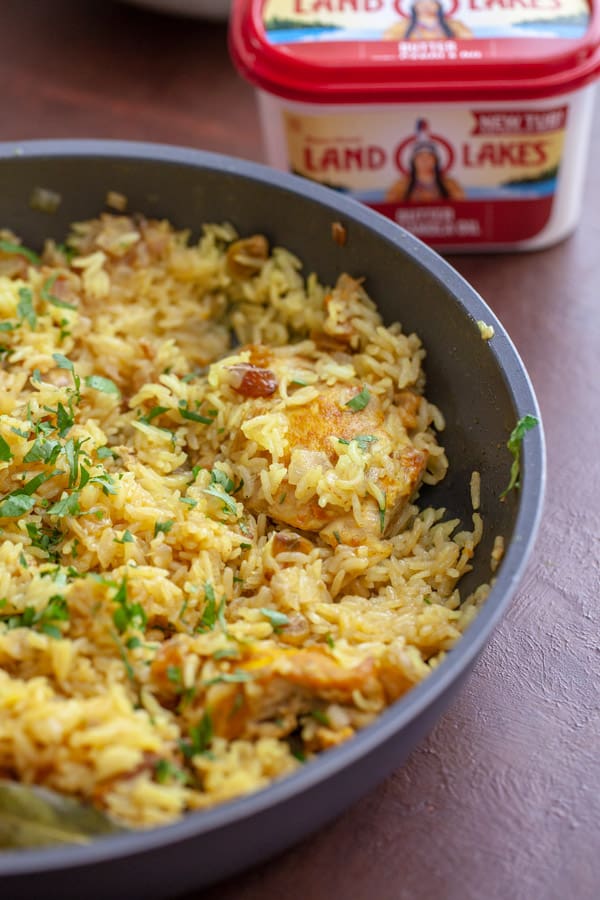 I like to garnish the chicken biryani with a little chopped cilantro and it’s ready to go!

This is a dish that I would normally reserve for take-out, but this version is perfect for even a weeknight dinner! Make it happen! 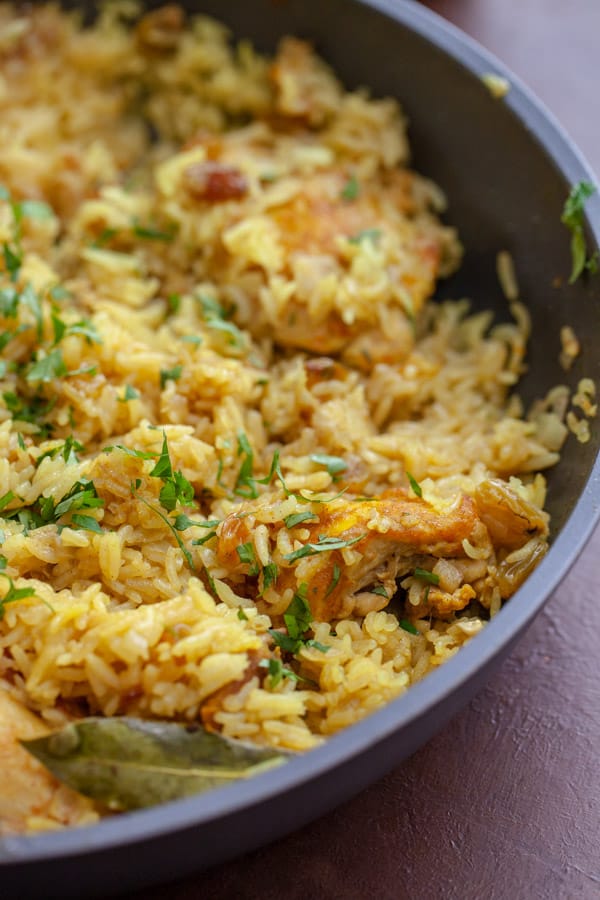 Here are a few other awesome chicken dinners!