I’ve stated on numerous occasions my loathing of boxed cake and cupcake mix. When I’m at the grocery store, I always find myself with a desire to run down the aisle and knock off all the boxes in a childish rage, but that would really just punish the employees.

My smaller gripe with these things is that you can’t customize the mix. They are very explicit in the amount of ingredients and the mixes have been engineered to work with those ratios of ingredients. Change them and be damned.

Not true with homemade batters. I wanted my brownies to have lots of chocolate. Butter. Beer. And more chocolate. And these Guinness Brownies deliver. There’s just no comparison.

1) Line a 9×13 baking dish with parchment paper and preheat your oven to 350 degrees.

2) Whisk together the flour, cocoa powder, and salt and set aside for later. If you want a dense brownie, use all-purpose, for a lighter cake-like brownie, try it with bread flour.

3) Whisk together the eggs and sugar in a large bowl until the sugar is dissolved and eggs are light in color.

4) In a separate mixing bowl, melt dark chocolate, milk chocolate, and butter over a double boiler. I just use a small pot with some simmering water. Stir regularly as the chocolate and butter melt together.

5) When the chocolate is completely melted, remove it from the heat and let it cool briefly. Then slowly whisk it into the eggs and sugar. Be careful that your chocolate isn’t too hot or you’ll cook the eggs.

6) Once that mixture is combined, stir in your guinness (or any stout beer). Then fold in the dry ingredients. Some lumps are okay in the batter.

8) Bake brownies for about 30 minutes or until a tester comes out mostly clean from the center.

9) Remove from oven and let cool briefly, then remove from pan and cut into either 3×5 (15 brownies) or 4×4 (16 brownies). Sprinkle with powdered sugar before serving.

It’s possible that these brownies have too much chocolate. It’s a lot of chocolate and in many different forms. But I thought they were delicious and I’m not even a huge chocolate guy. The dark chocolate and milk chocolate I melted together and then added the other chocolate chips before baking.

Be sure to melt the butter with the chocolate or it’ll be too thick to work with.

The one thing you might be able to cut back on a bit in this recipe is the sugar. I used a full cup, but I think you could take it down to 2/3 of a cup without too much issue.

However much you decide to use, whisk it together with the eggs until the mixture is light and the sugar is mostly dissolved.

When the chocolate and butter is melted, let it cool a bit so it doesn’t cook the eggs and then slowly whisk it into the egg mixture.

It should be really thick and wonderful.

This was the winning idea from last week’s poll so I was obliged to put beer in these brownies. The Guinness is subtle in the final Guinness Brownies, but I think it adds a nice touch.

Any dark stout would work fine, just make sure to not have any foam when you are measuring the beer.

Just pour the beer into the chocolate base and stir it together. Easy enough!

Once the base is done, whisk together the dry ingredients in a separate bowl (flour, salt, and cocoa powder). Then fold the dry stuff into the wet ingredients. It’s okay to have some lumps in the batter.

I recommend lining a 9×13 pan with parchment paper and then pouring the batter into the pan. The parchment paper will make it a lot easier to get these out after baking. Not essential, but a nice trick.

Sprinkle on the rest of your chocolate chips before baking!

Bake these Guinness Brownies at 350 degrees Fahrenheit until a tester comes out mostly clean from the center, about 30 minutes.

Let them cool a bit and then you can just lift them out of the pan and fold back the parchment paper.

Cut these up, sprinkle with powdered sugar and eat as many as you can before giving them away to friends.

The one thing I tried with these that was a bit of an experiment was that I used bread flour instead of all-purpose flour. The final brownies were very cake-like. While I tend to like a dense brownie, I thought the lighter texture was good because of all of the chocolate flavors.

If you do want a more dense brownie though, use all-purpose flour instead of bread flour.

Anyway you cut these guys, these are delicious and would be the perfect dessert for St. Patty’s Day weekend! 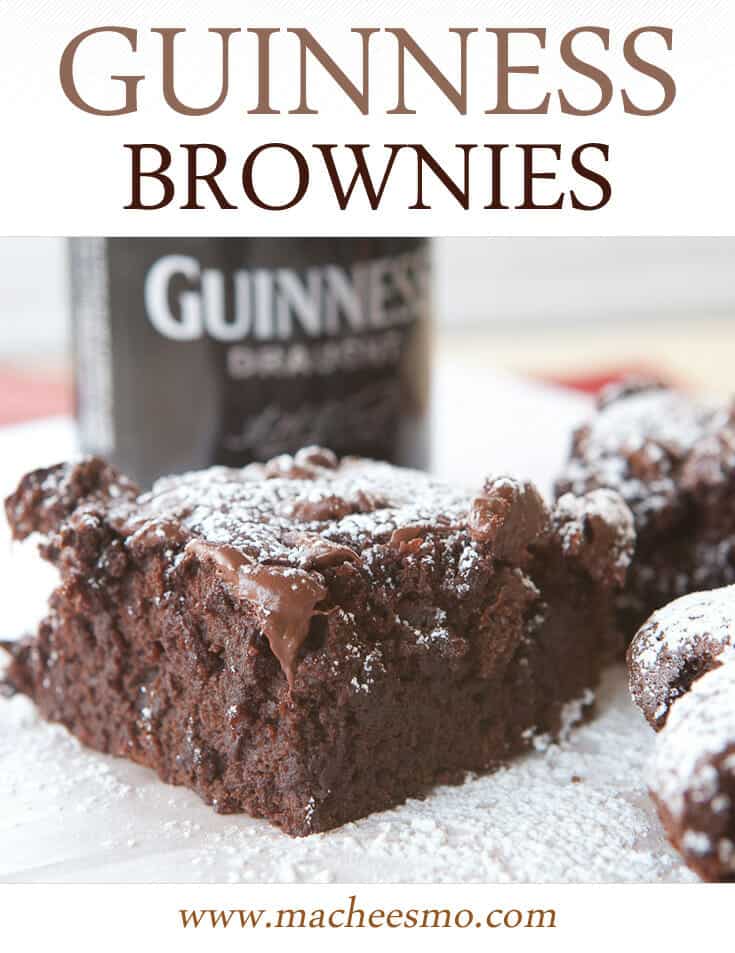