There’s a very important caveat to note before I get started with this post:

I do not have children.

I have a cat and a dog and they are more than enough for me to handle at this point in my life.  But that doesn’t mean that I can’t COOK stuff for kids right?

I’ve been watching the last season of Food Revolution (sound) on Hulu during my lunch breaks and it’s pretty devastating to see what is called “lunch” at some schools in the U.S.  How we expect kids to learn and grow while feeding them bad food is a mystery to me.

What you put in is what you get out.

But, I understand that it must be hard to feed children.  I wasn’t a picky eater when I was a kid, but my sister definitely was and I remember watching my mom struggle to get a vegetable into her mouth.

At the same time, I think kids eat first with their eyes.  If something looks fun, they are a lot more likely to try it out.  So I came up with three fun ways to spice up the normal packed lunch that might make your kid more likely to, say, try a carrot. 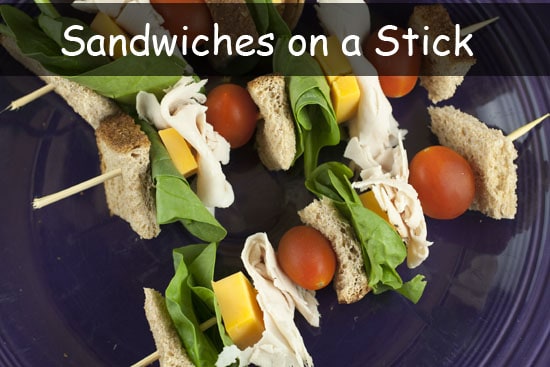 This is all about presentation.  It’s all the same stuff in a normal sandwich, but if your kid will only eat peanut butter and jelly this might be a way to get them to try out some other things.

It’s a scientific fact that food is more fun when it’s on a stick.  That applies to sandwiches also!  This takes about the same amount of time to make as a sandwich and just looks fun to eat.  You could include a few little containers of ketchup and mustard for dipping sauces.  Also, almost anything would work on these sticks.

Note: Betsy made the very astute observation that kids might not be allowed to have pointy sticks at school.  If that’s the case, I think you could break off the pointy ends and be okay. 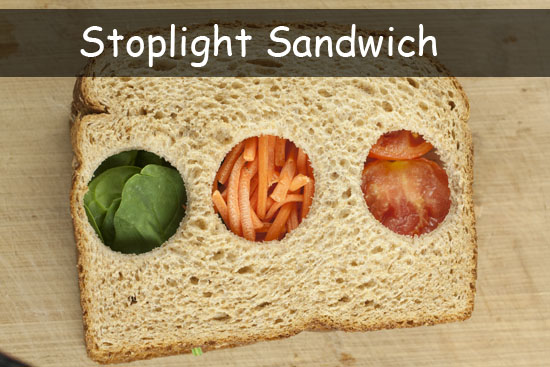 This one is a leap of faith really.  My hope is that it looks so fun, that kids will want to eat it.  It has lots vegetables in it though, which I hear is like arsenic for most children.

All you need for the sandwich is a tiny cookie cutter and some green, orange or yellow, and red veggies.  Then just strategically place them on the sandwich and you’re all set.

You can put other stuff on the sandwich also (cheese, turkey, etc.), but just make sure the veggies and the bread with holes in it line up.

I got this idea from a site called Planning with Kids and I thought it was just really fun.

I would’ve loved to open my lunchbox as a kid and see this sandwich. 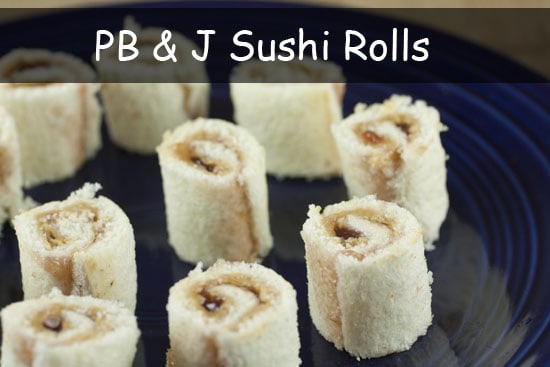 A peanut butter and jelly sandwich is one of my favorite treats to this day.  I still frequently have one for dessert.

I like to think of them as dessert instead of as a meal though which is why this sushi recipe works so well.  You can include four or five little bites along with something really healthy and hopefully convey to the little ones that they are supposed to eat them last.

These might look tricky, but they are pretty easy to make actually.  There are three keys to making these work:

1) Cut off the ends on the bread.  It just makes it roll easier.  I’m sure your kids will like this.

As I always asked my Mom growing up, “Mom, why do they even make bread with ends on it?”

2) Roll the bread thin (Upper right photo below).  It’ll be easier to roll if it isn’t all puffy.

3) Go light on the PB & J.  Otherwise it’ll just be messy.  A very thin layer of both is more than enough. 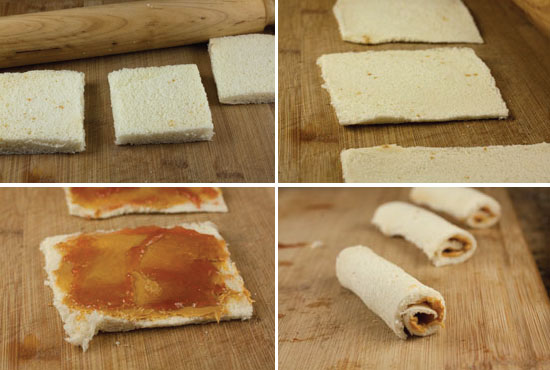 Be sure to roll up the rolls pretty tightly so they stay formed and, if you have one, cut the rolls with a serrated knife so they cut cleanly.

These are just super-fun.

I ate all of these for lunch as I made them and I liked all of them!

Of course, that’s not the test though.  The test is children.  I figured it would be kind of creepy for me to go handing out my lunches at the local elementary school so none of these have been officially tested.

If you have kids, leave a comment and let me know if you think your kids would actually EAT any of these!  If you try one out, even better.