I had a bit of a Twitter tantrum last week because I’m just plain sick of hearing about the amazing McRib sandwich from McDonalds.  Apparently the word on the street is that it’s just so disgusting that it’s somehow good.

That really doesn’t make sense to me.

That said, the idea behind the sandwich is a great one.  A nice big pork patty on a hoagie bun with BBQ sauce, pickles, and onions?  Sounds good to me!

So I decided to make a homemade version of the sandwich.  The recipe I came up with is really simple and actually cheaper than buying the sandwich from McDonalds.  Plus, now I have a bunch of them frozen so it’s faster for me to make one now than driving to McDonalds.

Directions for how to make a great homemade version of the popular McRib BBQ sandwich.

1) Cut pork butt into cubes. Try to separate fat and meat so you can grind them separately.

2) Grind or process pork. Do the fat first and grind it much finer. Then grind meat and mix the two together.

3) Add in spices to mix meat together.

4) Form six patties from the meat weighing about 5.5 ounces each.

5) Sear patties in a hot pan, over medium-high heat, for about 4 minutes per side.

6) Layer all patties in a baking dish and slather with BBQ sauce. Bake patties at 350 degrees for 25-30 minutes.

7) Add a patty to a hoagie bun and top with extra BBQ sauce, pickles, and sliced onions.

8) Once patties are cooled, you can freeze these by putting each patty individually into small plastic bags with extra sauce. Then put all those small bags into a large gallon sized freezer bag. To reheat, just cut off the plastic from one patty and microwave for about 2 minutes.

Must to my dislike, I figured that I should probably swing by Mickey D’s and see what all the fuss was about before I tried to recreate this sucker.

I noticed a few things.

2) It made my car smell like a BBQ sandwich farted.

3) It was much smaller than I thought it would be and didn’t look very appetizing.

I did try this sandwich though and wasn’t really impressed.  Obviously, the patty was super-moist because they inject it with all kinds of stuff to preserve it.  The BBQ sauce tasted like chemicals. The best part of the sandwich was the pickles and there were only two.

I did some research before I jumped into this sandwich.  There were a bunch of other people that thought it would be a good idea to make their own versions of this sandwich.  I immediately noticed a problem with some of the homemade versions.

The versions I saw were either amazing and complex like this awesome BBQ pork belly sandwich that takes about 5 hours to make and requires 3 pounds of pork belly.  On the other end of the spectrum, there were people who actually took the time to post on just microwaving frozen pork patties and putting BBQ sauce on them.  That takes only 2 minutes, but you end up with basically the same thing that McDonald’s makes.

I tried to find some middle ground.  I wanted a good patty, but I didn’t want to have to braise pork belly for 6 hours to get it.  So, I decided to go with pork butt.  For one, it’s a really economical cut of meat so I knew I’d be able to keep my costs down (even the best pork butt will run about $2.50/pound).  Secondly, pork butt has a lot of fat in it, so I knew it would keep my patties nice and moist. 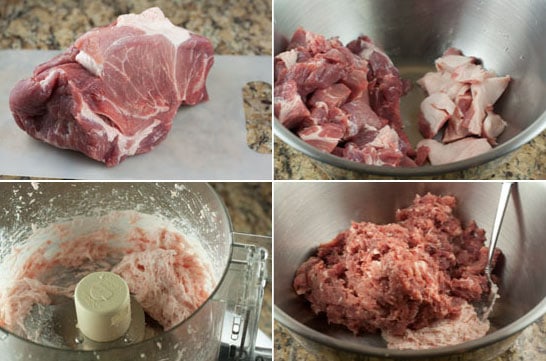 The process I used for making my patties is pretty straightforward.  If i had a food grinder, it would’ve been even easier, but I just used my food processor.  First, I cut my pork butt into fatty pieces and meaty pieces.  I wanted to grind/process them separately.  The fat needs to be a lot finer then the meat.  I ground my fatty parts until they were almost a paste and then just pulsed my meaty parts until they basically resembled ground pork.

Of course, the nice thing about making your own patties is that you can actually mix in some real flavor.  I stirred in some coriander, cumin, brown sugar, red pepper flakes, and salt and pepper.

Since we’re going to be putting these guys on a hoagie bun, you want to make the patties kind of oblong.  Each patty should be about 5.5 ounces and be about six inches long.  It’s okay if they are pretty thin, they will shrink up as they cook.

I went ahead and made all of my patties and just sat them on wax paper until I could cook them.

Cooking these bad boys is a two step process.  It works like a charm to make a really moist and tasty patty.  To start, just sear each patty in a hot pan over medium-high heat for about 3-4 minutes per side.  This should almost completely cook the patties because they are so thin.

The important part though is that they get a nice sear on them.

Once you get all your patties seared, add them to a large oven-safe dish and slather them with your BBQ sauce.  If you have a really thick BBQ sauce, I recommend adding about 1/2 cup of water to it to thin it out a bit.  It’ll thicken up again as it bakes.

Just completely coat all the patties in BBQ sauce and then bake them at 350 degrees for about 25-30 minutes.  This will completely infuse the patties with that delicious BBQ flavor.

I kept the exact same toppings as the original:  onions and pickles.  I sliced my onions pretty thin though and use way more than two pickles.

As far as the bun goes, you can toast it or leave it soft.  It’s good either way.  Pile a patty on the bun with some extra BBQ sauce and then top with onions and pickles.

These patties actually freeze really well.  This means that you could double the recipe and have great sandwichs for a long time.  I froze mine by making sure they were completely cool and then putting each patty individually in a small plastic bag with a few spoonfuls of extra sauce.  Then I put all of those small bags in a large freezer safe bag.

When you want a sandwich, just cut the plastic off the patty and microwave it for about 2 minutes.  Slap it on a bun with some extra BBQ sauce, onions, and pickles and you’re all set.  I thought the re-heated version was just as good as on day one.

I was really happy with how these turned out.  They cost a fraction of the original sandwich and now that they are made it takes me less time to make one then it would take for me to drive to McDonalds and buy one.

Most importantly, it isn’t even a competition when it comes to flavor.

If I wanted to make this post super-popular, I guess I could take a play out of the McDonald’s playbook and take it down for a few months and then BRING IT BACK!

Or I could just ask you all to share it.  When you hear people raving about the McRib, let them know about the NickRib. 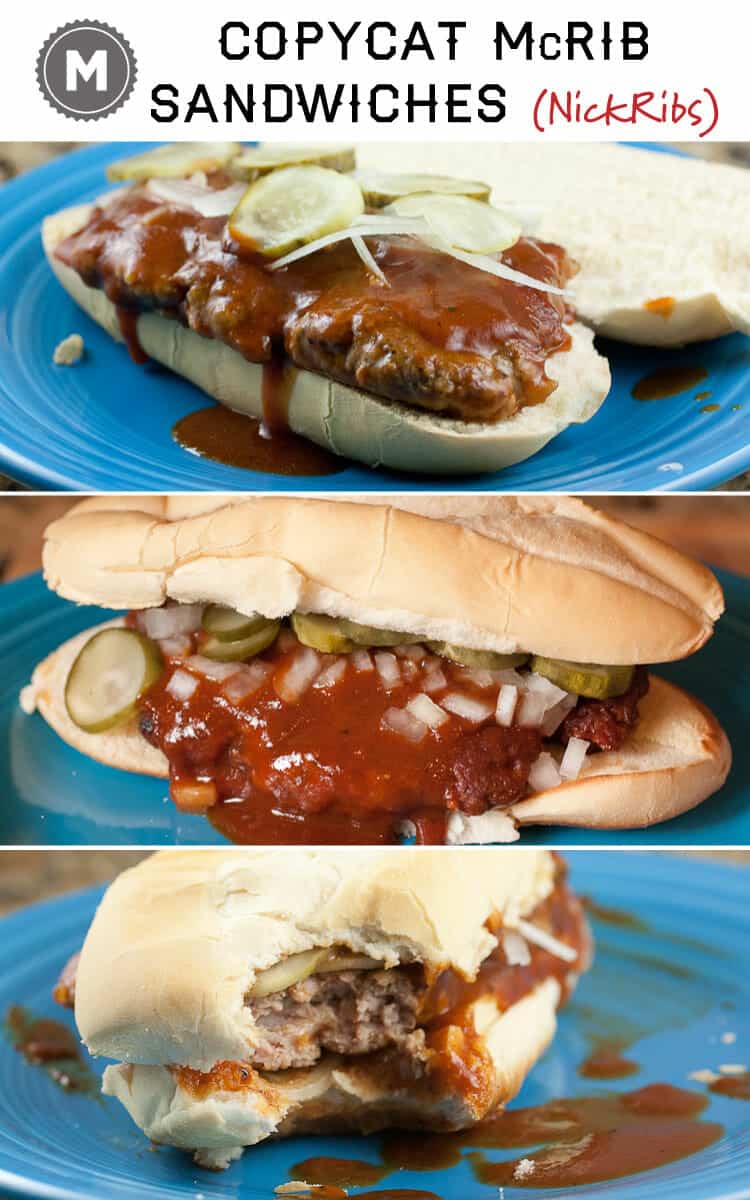